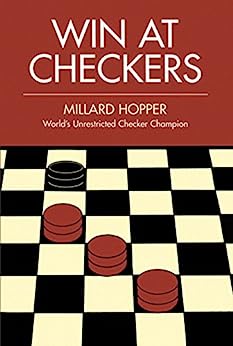 英语版本 Millard Hopper (作者) 格式: Kindle电子书
|
分享
分享 <分享样章>
广告
显示所有 格式和版本 隐藏其他格式和版本
Improve your game or learn checkers from Millard Hopper, the Unrestricted Checker Champion of the World. Here is a book that will appeal to all your questions — often even before you ask them — and impart many of the championship secrets of a perennially popular recreation.
The book actually presents, in simple terms, a lifetime of checker experience by one of the greatest players of all time. Individual chapters discuss the basic principles of the game, experts' shots and traps, how the beginner loses, standard openings, locating your best move, the end game, opening "blitzkrieg" moves, ways to draw when you are one man less than your opponent, two and three-move restrictions, and the standard rules of checkers. In other words, here is a book that treats checkers as a game of skill, not just as the casual recreation or "kid's" game most people feel it is.
Your questions are anticipated in more than 100 detailed questions and answers about both specific situations and general principles. A new Appendix, prepared specifically for this edition by the author, lists match, and tournament scores of recent years.
阅读更多
›  查看更多商品促销信息

INTRODUCTION
I A REVIEW OF THE GENERAL PRINCIPLES OF THE GAME
II WHAT ARE THE EXPERTS' SHOTS AND TRAPS?
III HOW THE BEGINNER LOSES
IV WHAT ARE THE STANDARD OPENINGS OF CHECKERS?
V HOW CAN YOU LOCATE YOUR BEST MOVE?
VI CHECKER BRAIN TEASERS
VII THE END GAME
VIII "SOME OPENING "BLITZKRIEGS"
IX WAYS TO DRAW WITH A MAN DOWN
X "WHAT ARE THE "TWO" AND "THREE-MOVE" RESTRICTIONS?"
XI FINAL ADVICE TO THE STUDENT
XII "THE STANDARD LAWS OF CHECKERS"
INDEX
--此文字指其他 kindle_edition 版本。

Graham H. Seibert
5.0 颗星，最多 5 颗星 Served the purpose: beginner to adequate amateur in a couple of hours of reading
2018年1月6日 - 已在美国亚马逊上发表
已确认购买
I bought this book so I could help my six-year-old son learn the game of checkers, which I had not played since childhood. I definitely got my money’s worth.

The most important lesson is this. You don’t win so much as avoid losing. If you don’t make blunders, you will win. When you follow the strategies in the book, starting with the 12 common openings in checkers, you will find that the number of good moves open to both players is extremely limited. Everything that isn’t good is a blunder. Every blunder can be turned to advantage by the opponent.

This book repeats the wisdom that every beginning checker player learns, focus on the center of the board, not the sides. The strategy should be to control the center because it most powerfully restricts the good moves available to you your opponent. Another powerful insight for the beginner is that checkers, like chess, is a game of combinations. You cannot send a single checker out and expect it to do you much good. They have to move in formations. As the combinations evolve, they involve seeing ahead several moves. One player will force a jump, to which the other player usually responds with a jump, and the first player may again respond. The player who forces the first jump needs to have had the ability to see ahead three or four moves. In the best of conditions that player will come up with the material advantage – more checkers won. If both players are quite competent, success will be measured simply by improved board position.

Good board positions are generally those in which the players checkers are concentrated in the center, protecting each other. Another advantage is to force the opposing player to move checkers off of the back row, especially to adjoining checkers, freeing the path to move in to get a king.

These strategies may be easy for me to write, but the player must internalize them. This book is economical in size and yet very well constructed to teach. It provides enough examples that the reader can play through himself to practice looking ahead, visualizing attacks and defenses.

The bottom line is that the book is clearly worth the money. It will elevate a rank beginner to the status of a moderately capable player, able to beat most people who happen to casually notice that you have a checker game in your house.

D. Earls
5.0 颗星，最多 5 颗星 makes you better
2013年2月4日 - 已在美国亚马逊上发表
已确认购买
I figure if you're buying a book about winning at checkers, you're getting serious about the game. This book isn't going to get you to beating Chinook, but it's going to make you a better player. Mr. Hopper does a really good job of helping you avoid the common mistakes the beginner makes.

Be sure you have your checkers set out and that you follow the moves on the board.

This isn't the first book I've read to improve my game, but it's the first that actually improved it. Well-written and clear.