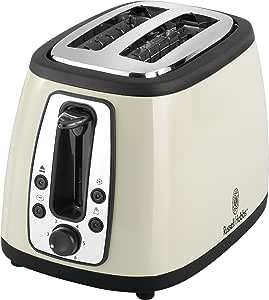 Amazon Customer
2.0 颗星，最多 5 颗星 Just our luck!
2017年3月23日 - 已在美国亚马逊上发表
颜色: Stainless Steel已确认购买
I've heard great things about this toaster. And I'm sure others probably got one that truly worked. We were disappointed! We just don't have good luck with toasters! I guess if there is a bad one in the lot, we get it! This one is no different. We have to put the setting at the highest level to try to get the toast a golden brown. When it pops up, some is golden brown, some parts burnt and some parts not brown at all.
Oh well. No need to return, we've never found anything that really works.

dsrussell
4.0 颗星，最多 5 颗星 Great little toaster.
2013年7月14日 - 已在美国亚马逊上发表
颜色: Stainless Steel已确认购买
My inexpensive nifty "Back to Basics" toaster and egg cooker died. It lasted five years almost to the day, which is pretty much the norm I'm sad to say. And while it was nifty, there were enough things wrong with it, even after the first use, that I really didn't expect it to last more than one or two years (and was one of the reasons that I only gave it a marginal 3 stars). I guess I got lucky. I wonder how this Russell Hobbs will do?

Let's talk about what is right with this toaster -- other than its name;). It's reasonably small and its polished metal case shows off very nicely. I think it would make an attractive addition to many kitchens. I like that the controls are at one end, because that is how I place my toasters on my counter. I like that the cancel button is lit up so one doesn't have to peer close to see which button to push (they are designated with symbols instead of words). The black controls are all very smooth in operation and contrasts nicely against the polished metal surface. Surprisingly, the toaster is very quiet when the toast pops up. What I especially liked was how high the bread sits up when placed in the toaster. There is absolutely no need to have a push up control, which on most toasters (like my last one) works only marginally well. I often had to poke around getting some of the shorter breads out, but that won't be the case with this one. The time it takes to toast a slice of bread, such as Roman Meal (around the number 3 level on the dial) is about 1 minute 45 seconds, which is far quicker than my last toaster. Not only that, it toast very evenly on each side of the bread from top to bottom, although the inner burners will toast a bit darker. With two slices of bread one must raise the level a little bit to get a similar shade one normally gets using one slice of bread. This is typical for every toaster I have ever purchased so it's really not a negative.

Now for what is not right with this toaster. As has been stated, the electrical cord is extremely short. What makes matters worse is that it is connected to the toaster toward the end where the controls are, which gives you far less reach. Fortunately, my outlet is very close, but even then it still pulls the cable and would no doubt pose problems for many people. I also have never understood why the crumb tray has to pull out from the rear. To me, this is a stupid design and is inconvenient, but it seems most toasters come this way. I mean, why does one have to turn the toaster around just to empty the crumb tray? A minor annoyance? Sure, but I've never understood the logic in accessing it from the rear. I guess I could also call the price a negative, but I don't mind paying extra money if there is real value, which, so far, this toaster is providing.

One thing I should also mention is passing. When first using this toaster, not only is there an odor, but also a little smoke. That was a bit disconcerting when I noticed the smoke, but it passed within 5 or 6 seconds. Even the smell went away after the first few toast tests. I suppose this is normal. At least it has never reoccured and I've had this thing for over two months.

All-in-all this is a very nice little toaster. Actually, it is the best toaster I've owned. And it's certainly better than my previous toaster (which isn't saying much), and it's much faster too. I like how it looks and the feel of the controls. As I mentioned, I especially like how high the bread sits in the toaster, yet it is able to fully retract and toast every inch of a normal slice of bread (my other toaster missed the top quarter-inch to half-inch). Between 1 and 10, I give this toaster an 8 (or a 4 star rating). However, It could easily have been a 5-star rating if not for a couple of straight-forward and easy to fix problems. If I could talk to the company, I'd ask for just two things. If you are going to have a power cord that short, then run it out the back. And second, be unique and allow for the crumb tray to be accessible from the front. I do have hopes that this toaster will last much longer than my other one, but obviously only time will tell.

slj
5.0 颗星，最多 5 颗星 GREAT Toaster
2014年12月9日 - 已在美国亚马逊上发表
颜色: Stainless Steel已确认购买
After a lifetime of buying toasters, each one crappier than the last, I found this one on Amazon and bought it in July 2013. I didn't review it then, but here I am, a year and a half later, adding my review. It just occurred to me I should contribute a note--it will toast bread, bagels, English muffins, and whatever else might need toasting. You can put in items right from the freezer, because there is a special feature for frozen bread. It is sturdy and, all this time later, as bright and shiny as when it was new. Finally! An amazing toaster. One that actually does what it is supposed to do! The best EVER. Or at least the best one I've found--and believe me, I've had more than a few!
阅读更多
3 个人发现此评论有用

Michael
3.0 颗星，最多 5 颗星 Smelly!
2016年1月20日 - 已在美国亚马逊上发表
颜色: Red已确认购买
While we might eventually like this toaster, I need to do a first impression review which I will update later. this toaster is apparently covered in manufacturing oils, as the smell coming out of the first few slices was nauseating. We will go to the store tomorrow and buy the cheapest loaf on the shelf and run every slice through this toaster to hopefully burn off the oils that have permeated our home.
阅读更多
5 个人发现此评论有用

Donna
3.0 颗星，最多 5 颗星 Fairly good toaster
2013年10月21日 - 已在美国亚马逊上发表
颜色: Stainless Steel已确认购买
I have replaced my toaster 3 times in 4 years. Can't seem to find one that actually toasts both sides evenly and at the same time. What is wrong here? How hard can it be to make a toaster that works? My mom's old toaster worked for 25 years before we gave it away- still in usable condition. This toaster is better than my last one and for $70 less. So it seems that cost is not a sign of quality with toasters. This one toasts both sides evenly about half the time and then the other times, if I turn it around the second side will toast nicely without the toasted side burning. Odd but that is the truth. Anyway, we'll keep it as it works better than the last one did.
阅读更多
4 个人发现此评论有用
加入亚马逊Prime，从此免运费
亚马逊Prime会员可享海外购美/英/日/德跨境免邮，全年无限次！更有免费无限次阅读电子书服务
> 立即加入
了解我们
合作信息
帮助中心和购物指南