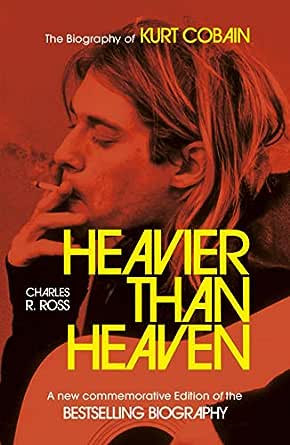 From Publishers
"And there had never quite been a rock star like Kurt Cobain," Cross eulogizes in this celebrity biography. Unfortunately, Cross, former editor of the Rocket, a Northwestern music and entertainment weekly, never proves his claim. Instead, Cobain's story, culled from more than 400 interviews with friends, family and colleagues and exclusive access to Cobain's unpublished diaries, sounds wholly ordinary, from boilerplate adolescent bitterness about his parents' divorce ("I hate Mom, I hate Dad. Dad hates Mom, Mom hates Dad. It simply makes you want to be so sad") and malt liquor, punk rock-adorned angst to the tawdry details of his drug addiction. "Even in this early stage of his career, Kurt had already begun the process of retelling his own story in a manner that formed a separate self," writes Cross as he carefully dispels some of Cobain's self-made myths, including claims of living under a bridge, "tales... about his constant abuse at the hands of Aberdeen's rednecks" and harboring an aversion to fame. The many unenlightening observations are often painted thick with sensationalism; other times, Cross trawls the bottom for sources whose credibility and relevance are dubious at best. (For instance, he interviews Cobain's drug-addicted ex-babysitter, Cali, and some of her girlfriends, yielding a depressing she-said-he-said of Kurt's final days.) Conspiracy theorists will speculate about the conditions under which Cross gained access to Cobain's private journals. Complete with gossip and meticulous references, the biography will catch the devotees, though, like junk food, it may leave them feeling unnourished. 16 pages b&w photos. (Aug. 15) Forecast: Released on the 10th anniversary of Come As You Are and with radio giveaways, this book will sell well.

From Booklist
Cobain, the singer-songwriter of the band Nirvana, was in the public eye relatively briefly before self-destructing, but his impact and influence were huge. Yet Cross feels that Cobain's artistry remains largely undervalued, perhaps eclipsed by the cult of personality that accrued to him as the progenitor of grunge. Cross got access to Cobain's diaries and took four years to research and write the book; by and large, the result is worth that effort. Maybe the lengthy process has helped the book be deeper and more detached, like a real biography, but still it has barely moderated Cross' fascination with Cobain for such eccentricities as developing a "process of retelling his own story in a manner that formed a separate self" and speaking of himself in the third person even when writing to a friend. Probably too reverent for Nirvana nonfans, this is still a standout among rock bios and deserves its place in pop-culture collections. Mike Tribby
Copyright © American Library Association. All rights reserved --此文字指其他 kindle_edition 版本。

"One of the most moving and revealing books ever written about a rock star."--Los Angeles Times

"As engrossing as a good novel. A remarkable portrait."--Entertainment Weekly

Charles R. Cross was editor of The Rocket, the Northwest's highly regarded music and entertainment magazine and the first publication to do a cover story on Nirvana. He is also the author of Room Full of Mirrors: A Biography of Jimi Hendrix; Led Zeppelin: Heaven and Hell; Backstreets: Springsteen, the Man and his Music; Nevermind: The Classic Album; and Here We Are Now: The Lasting Impact of Kurt Cobain. His writing has appeared in Rolling Stone, Esquire, and Spy, among many other publications. He lives in Seattle. --此文字指其他 kindle_edition 版本。
阅读更多

Tempe Mindspring
5.0 颗星，最多 5 颗星 READS LIKE A NOVEL
2019年4月6日 - 已在美国亚马逊上发表
已确认购买
One of the best written biographies I have read in my lifetime ( am a senior citizen with long history of reading books) With honesty and sensitivity, the book flows together forming a lifetime. With references to interviews and personal journals, there is a sense of authenticity. Author refers to mental illness, trauma exacerbated by addiction to provide insight to Cobain's character. For myself, I would have loved more development of the theme of loss of family, family divorce and loss of self. Overall, this book gave me a sense of who Kurt Cobain was as a person. I am buying and listening to his music, doing other research and ordering more resources. He is both saint, sinner, genius and lost soul.
阅读更多

jmcdonald01
5.0 颗星，最多 5 颗星 finally going to finish this book!
2018年10月15日 - 已在美国亚马逊上发表
已确认购买
I've tried to finish reading this book several times (thru the library). but I moved to a tiny town that doesn't have this book! what?! so, I decided it was time to add it to my book collection. why I haven't just done this, I have no idea. I purchased it used. it is in good condition, well read. it came in the mail quickly, faster than I expected. and I have finally finished it and placed it in my bookcase.
阅读更多