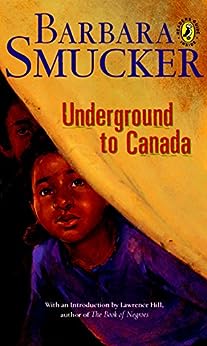 "A passionate tale of human dignity." - Books in Canada

"Barbara Smucker has created a sensitive and dramatic story about a young girl's flight from slavery, and—some three decades after it first appeared in print—Underground to Canadastill serves as a wonderful introduction to a vital and fascinating element of Canadian history." - Lawrence Hill --此文字指其他 kindle_edition 版本。

Barbara Smucker was born in a small prairie town in Kansas in 1915 and attended school there through university. Her careers have been numerous. They include newspaper reporting, high school teacher and librarian. She is the author of numerous award-winning novels, including Runaway to Freedom, Days of Terror and Incredible Jumbo. She lived for many years in Ontario, Canada, but now lives in the USA. --此文字指其他 kindle_edition 版本。

susieq
5.0 颗星，最多 5 颗星 Would make a great movie.
2013年4月3日 - 已在美国亚马逊上发表
已确认购买
I love this book so much and I think a movie should be made about it. I read this book the day it came in the mail. I have read it at least 5 times. It is easy to read for youngsters; and they will understand what slavery was.
阅读更多
1 个人发现此评论有用

Isabelle L.
5.0 颗星，最多 5 颗星 A great way to discover history through the experience of a slave trying to reach Canada
2014年2月15日 - 已在美国亚马逊上发表
I will admit that I knew about the Underground Railroad but I never really realized that the place where former slaves were trying to escape to was Canada – not until I read this book. I was born and raised in Quebec and the Underground Railroad was not part of the history of that province. And as far as I can remember it was never really mentioned in the history of Canada lessons either. But I married a Franco-Ontarian and we live in Ontario. When I started to homeschool, I stumbled here and there on mentioned of Underground Railroad but somehow I thought it was about slaves trying to reach the northern states of the US.

Imagine my surprise when I read this marvelous novel who introduced me to the adventure of leaving the plantation where a slave was to escape north toward freedom. As I read this book, I was hooked and my oldest son also read it in an incredible short period of time. Both of us enjoyed learning more about the process of the Underground Railroad and discovering how much time it took to reach a destination.

Reading this book was an eye opener on something that was part of Canada’s history as well as the USA. We learned quite a bit about the Underground Railroad. The book also contains information on the author, a list of the main people involved in the Underground Railroad, things to do and things to think about. It also contains a glossary as well as a bibliography for those of you who would like to read more on the subject.