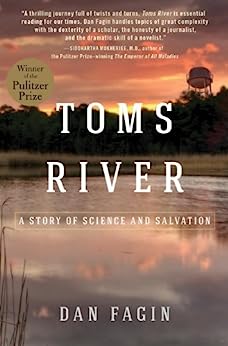 The riveting true story of a small town ravaged by industrial pollution, Toms River melds hard-hitting investigative reporting, a fascinating scientific detective story, and an unforgettable cast of characters into a sweeping narrative in the tradition of A Civil Action, The Emperor of All Maladies, and The Immortal Life of Henrietta Lacks.

One of New Jersey’s seemingly innumerable quiet seaside towns, Toms River became the unlikely setting for a decades-long drama that culminated in 2001 with one of the largest legal settlements in the annals of toxic dumping. A town that would rather have been known for its Little League World Series champions ended up making history for an entirely different reason: a notorious cluster of childhood cancers scientifically linked to local air and water pollution. For years, large chemical companies had been using Toms River as their private dumping ground, burying tens of thousands of leaky drums in open pits and discharging billions of gallons of acid-laced wastewater into the town’s namesake river.

In an astonishing feat of investigative reporting, prize-winning journalist Dan Fagin recounts the sixty-year saga of rampant pollution and inadequate oversight that made Toms River a cautionary example for fast-growing industrial towns from South Jersey to South China. He tells the stories of the pioneering scientists and physicians who first identified pollutants as a cause of cancer, and brings to life the everyday heroes in Toms River who struggled for justice: a young boy whose cherubic smile belied the fast-growing tumors that had decimated his body from birth; a nurse who fought to bring the alarming incidence of childhood cancers to the attention of authorities who didn’t want to listen; and a mother whose love for her stricken child transformed her into a tenacious advocate for change.

A gripping human drama rooted in a centuries-old scientific quest, Toms River is a tale of dumpers at midnight and deceptions in broad daylight, of corporate avarice and government neglect, and of a few brave individuals who refused to keep silent until the truth was exposed.

“A thrilling journey full of twists and turns, Toms River is essential reading for our times. Dan Fagin handles topics of great complexity with the dexterity of a scholar, the honesty of a journalist, and the dramatic skill of a novelist.”—Siddhartha Mukherjee, M.D., author of the Pulitzer Prize–winning The Emperor of All Maladies

“Meticulously researched and compellingly recounted . . . It’s every bit as important—and as well-written—as A Civil Action and The Immortal Life of Henrietta Lacks.”—The Star-Ledger

Jack Meiman
5.0 颗星，最多 5 颗星 Excellent book on a Criminal Episode of Industrial Dereliction
2023年2月2日 - 已在美国亚马逊上发表
已确认购买
A very deserving Pulitzer prize winner on a shameful chapter of industrial neglect in late 20th century New Jersey. It was painstakingly researched, and if some minor aspects of the science are arguable, the essential picture is entirely and undeniably correct. The community and environment of what is today Toms River, NJ was criminally contaminated by toxic industrial waste over a period of years, while the responsible company parties repeatedly avoided that responsibility both during and after that poison was dumped into the ground.

An exceptional narrative of a stunning series of failures by not only that chemical company, but also the state & federal regulatory agencies and the town government itself.

Kathleen Beck
5.0 颗星，最多 5 颗星 Great information written in a concise manner.
2022年11月2日 - 已在美国亚马逊上发表
已确认购买
I grew up in Toms River with my dad, who worked at the Ciba- Geigy plant, I found the content of this story very informative. I am learning even more about the town of my youth and how politics affected how large corporations broke the law on a daily basis.
阅读更多
1 个人发现此评论有用

Nernst
4.0 颗星，最多 5 颗星 Very Interesting Despite Its Flaws
2013年12月31日 - 已在美国亚马逊上发表
已确认购买
The book seemed to be written in two very distinct parts. The first, a fascinating, highly informative, somewhat troubling but generally even-handed examination of many aspects of our vast industrial expansion of the previous century and a half. The second, a somewhat cumbersome, sad and harder to digest probe into the minutiae of a massive class action lawsuit built upon statistically weak data.

As a former resident of both the industrial northern tier of NJ in the 1960's-1970's and of the seemingly more "pristine" Toms River, NJ for a short period in the mid 1980's, the first part of the book held me spellbound as it not only recalled events and attitudes that I personally remember vividly but also illustrated well the inherent flaws of lax regulatory oversight on entities whose sole existence is predicated on the absolute maximization of financial profit. Fagan does a commendable job in both his facts and his prose in relating the events that led to the polluting of Toms River.

I thought however that the subsequent extensive focus on litigation based primarily upon the existence of chemical agents at the parts per billion concentration in the public water supply weakened the overall "cautionary tale" effect that the author claims as motivation for writing the book. Clearly, had the specific laboratory analyses been done decades earlier the toxicity of the water (and probably the air) would have been evident, but here's the rub, they weren't done because there were little to no regulations in place and no means of enforcing them if they had been in place. As laws changed so too, begrudgingly, did the practices of industry. And obviously, with time the water became less contaminated as fewer pollutants were introduced to the surrounding soils. By the time the extensive water testing was done, pollutant levels were much lower than in the past, and these results are what the regulatory agencies reported to the public and what the lawyers worked with in the lawsuit. The author's implication that a significant part of the blame for Toms Rivers' health problems rested with lax or arrogant regulatory agencies seems weak based upon the evidence he presents. It also seems to be pointing the finger in the wrong direction, and may provide encouragement to the many today who have been conditioned to believe that government is ineffective and therefore unable to regulate for the common good--an ironic viewpoint which if acted upon would likely return us to a similar state of affairs that led to the health and environmental problems encountered in Toms River and thousands of other unnamed places throughout this country. With respect to the industrial dumping of the past it would seem that the best we as a society can do is to clean up what we can, learn from our mistakes and not make them again.
阅读更多
2 个人发现此评论有用

russell w hardy
4.0 颗星，最多 5 颗星 Trouble Down the Shore
2013年4月21日 - 已在美国亚马逊上发表
已确认购买
I grew up in New Jersey in the 1940's and, in those years, before the Garden State Parkway, the stretch of South Jersey "down Barnegat Bay" was rural and remote, populated year round by a handful of farmers and baymen, and in the summer by a few recreational sailors and fishermen.
But that was about to change.The Parkway brought civilization, in the form of real estate development and hordes of summer tourists, and paved the way for industrial development and environmental degradation..
"Toms River" is a very fine book that documents the arrival of a large chemical plant in the small South Jersey town of Toms River. Like many such rural initiatives, the plant was initially welcomed by the locals because it brought badly needed jobs to a depressed economy. But, as the years passed, it became increasingly clear that it also brought chemical pollution of the local river and toxic changes in the Toms River underground water supply.
Toms River documents these events , which occurred and were exposed over several decades, beginning with a slowly evolving awareness of an increased cancer risk in the local population, especially children. It goes on to describe the role of local activists in exposing the problem, and the shortcomings of the local politicians, State of New Jersey and the federal government in correcting it. It also treats such obscure but interesting topics as the epidemiology of cancer clusters and the chemistry of various industrial pollutants.
i can't recommend this book too highly. it is somewhat long but very well written and holds the reader's attention, even when describing technical subjects such as the statistical analysis of cancer clusters.
Toms River could have used a few more maps and tends to get bogged down towards the end; I would fault it for not being specific enough when categorizing childhood leukemia and brain tumors, since there are many forms of each, and not all may be related to industrial pollution.
But these are relatively minor quibbles and shouldn't detract from an otherwise fine and important book. It should be read by anyone interested in protecting our fragile environment, and especially by local politicians interested in attracting industry to their communities.
阅读更多
12 个人发现此评论有用