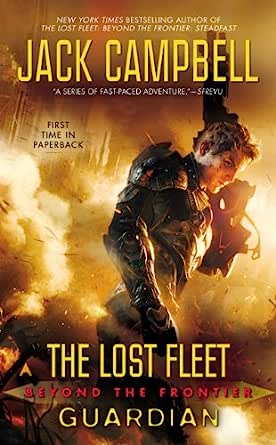 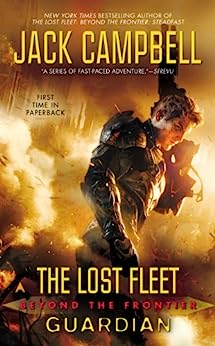 The Lost Fleet: Beyond the Frontier: Guardian (English Edition) Kindle电子书 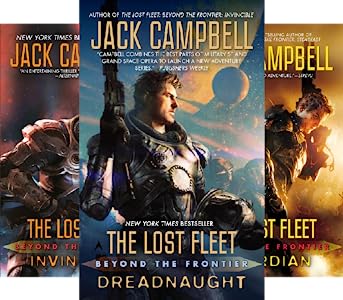 “Jack Campbell” is the pen name of John G. Hemry, a retired naval officer who graduated from the U.S. Naval Academy in Annapolis before serving with the surface fleet and in a variety of other assignments. He is the author of The Lost Fleet series (Steadfast, Invincible, Dreadnaught) as well as The Lost Stars series (Perilous Shield, Tarnished Knight) the Stark’s War series (Stark's Command, Stark's Crusade), and the Paul Sinclair series (A Just Determination, Burden of Proof). His short fiction appears frequently in Analog magazine. He lives with his indomitable wife and three children in Maryland. --此文字指其他 kindle_edition 版本。

Praise for The Lost Fleet novels

“A series of fast-paced adventure.”—SFRevu

Mary Soon Lee
3.0 颗星，最多 5 颗星 The ninth installment in the adventures of John Geary, all nine of which I've enjoyed.
2019年11月26日 - 已在美国亚马逊上发表
已确认购买
This is the ninth book in the Lost Fleet adventures of John Geary, which are told in a consecutive pair of military science fiction series. I am reading these books purely for entertainment, uncontaminated by flimsy excuses such as keeping appraised of the science fiction field (I'm an author as well as a reader), or wishing to learn from Campbell's handling of space battles (excellent though it is). I've read the first nine books in under a month. As you may deduce, they have entertained me well. Yes, they are somewhat formulaic, but the chosen formula suits my mood. Yes, the characterization is somewhat unsubtle, but I've rooted for the hero from the first chapter of the first book through to the final chapter of book nine -- and fully anticipate rooting for him through the remaining two books. A list of three things that I appreciated in book nine follows (medium spoilers ahead).... I appreciate that the latter part of this book progresses beyond the effort to return safely to Alliance space. I like Campbell's depiction of aliens. And I found the book's conclusion moving. I'll be starting book ten soon.

About my reviews: I try to review every book I read, including those that I don't end up enjoying. The reviews are not scholarly, but just indicate my reaction as a reader, reading being my addiction. I am miserly with 5-star reviews; 4 stars means I liked a book very much; 3 stars means I liked it; 2 stars means I didn't like it (though often the 2-star books are very popular with other readers and/or are by authors whose other work I've loved).

Kindle Customer
5.0 颗星，最多 5 颗星 The Geary's make humans proud
2019年12月8日 - 已在美国亚马逊上发表
已确认购买
This book mixes our current US Navy traditions and ceremonies and projects them into the future. Outstanding variation on crossing the equator ceremonies currently observed projected into a space scenario. I found that, albeit idealized, the BlackJack /Tanya story is similar to ancient Greek sagas of old. Hero, sent by the Gods, saves humanity with the help of exceptional mortals. The anecdotal remembrance of what Desjani dreamed was worth the read alone. Excellent....Great space opera, and maybe some lessons for the future indeed. Don't ever stop writing about this...it keeps my hopes up for the future!
阅读更多
1 个人发现此评论有用

The series keeps you in such suspense that I literally have a hard time putting it down! I listen to the book while doing dishes, driving etc. You really can't go wrong. Highly recommend the series, and recommend you start at the beginning!!

Amazon Customer
3.0 颗星，最多 5 颗星 A "bridge" entry if ever there was one
2013年6月15日 - 已在美国亚马逊上发表
已确认购买
This is one of my more favorite sci-fi series. Anytime I'm looking for something new to read, I'll check to see if the author has added anything new to the series. That said, while I liked this book, it's clear the author has changed some over time as his descriptions of the battle scenes is much more cursory and "lighter" (not sure that's the correct word here but it kind of fits) than his earlier descriptions. He seems much more engaged by the political intrigues of the Alliance government than providing a detailed narrative to what's going on in the scene he's taken us to "on-site".

There used to be more thought devoted to the internal dynamics of the fleet: more detailed concerns for the crew, the conditions of the ships and the efforts to keep them running, the attitudes and factions of the vessel captains comprising the fleet...but now most of that has been jettisoned for more soap opera type fare. It's devolved from action as a co-star to action as a backdrop to talking about things. That's my gripe overall and it's one that many series fall into as the author makes their efforts to "flesh out" characters. I get why it happens but the effort, most of the time, detracts from the action sequences which is what made the books entertaining to new readers to being with.

Anyway, I regard this book as a bridge from old themes to possible new ones. There was, what seemed to me anyway, a fair amount of conclusions of some themes with introductions to others. To that end, to me, this book won't be fully appreciable until we see where the author goes in future efforts. The subplot with the Dancers, for instance. It has a fair number of possibilities (the notion they may be holding back on the Alliance communications-wise, their singular driving force to visit Earth for the reason they did, what their driving force suggests as to how they may act in the future) which will only be gradable with what the author chooses to do with them (if anything) in future books.

As I said, it's a good read, helps to tie up some flapping ends, introduces some obvious new directions the story can go (yeah, what WILL the Alliance do with a second whole fleet whose existence they're trying to keep secret?) and sets the stage for future installments. For fans of the series, it'll end up being that fulcrum story where things changed direction, I suspect.