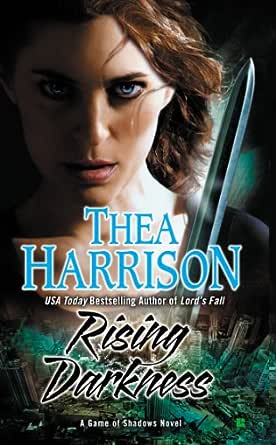 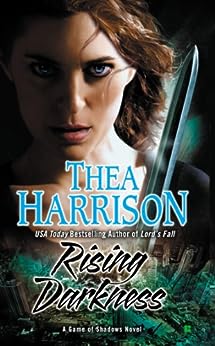 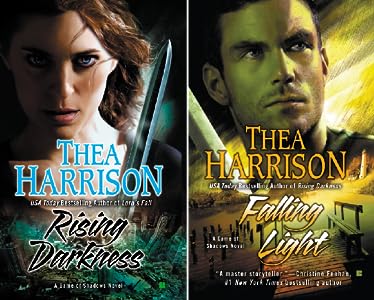 "Rising superstar Harrison ventures into darker territory with her chilling first book in the Game of Shadows series. . . . No matter the genre, Harrison should be an auto-buy!" ---RT Book Reviews --此文字指 audioCD 版本。

Thea Harrison is the pen name of Elder Races series author Teddy Harrison. She wrote her first book at age nineteen and had sixteen romances published under the name Amanda Carpenter.
An avid reader her whole life, Sophie Eastlake happily extends her love of books to her passion for narrating. She lives in New York, where she survives the subway grind with a book in her hand and drops in on every literary reading she can find. --此文字指 audioCD 版本。
click to open popover

mom2zoo
5.0 颗星，最多 5 颗星 Not an Elder Races pair of books - and I just don't care!
2017年10月12日 - 已在美国亚马逊上发表
已确认购买
Just read this - I'd purchased it a while ago, but thought it fit into the Elder Races series and set it aside when it didn't. Really glad to discover it again, and got the sequel as well (Falling Light), because heck, once I was in I had to know! In some ways it's a subtler, quieter pair of books and I'm finding it really hard to describe them without "spoilers". In some ways I found the story heart-wrenching, and I really wanted more backstory on what happened before - how exactly did the villain get so wrong, and how do you turn away from the person who is the other half of your soul? These two books aren't as comfortable as I found the Elder Races books - this one could happen in our universe and unless you're collateral damage, you'd never know. It's about reincarnation and love (and what it can and cannot do) and souls' memory and redemption and sacrifice. If reincarnation isn't a big leap for you, the build may seem a little slow, but the protagonist's journey isn't an easy one, in any sense. Now if you'll excuse me I'm gonna go read them again.
阅读更多
5 个人发现此评论有用

Shauni
4.0 颗星，最多 5 颗星 Rising Darkness, A Review for the Blog Bodice Rippers, Femme Fatales and Fantasy
2013年5月6日 - 已在美国亚马逊上发表
已确认购买
Thea Harrison takes on the question of reincarnation in this deliciously dark story of good vs evil.. In Rising Darkness (A Game of Shadows Novel) There are no unicorns or dragons, vampires or elves.. just man against the darkest evil and a select few that have been sent to fight it.

Seven souls left their lives, their dimension their very bodies to follow the ultimate evil to earth. Throughout time these souls have battled and lost until finally there are only three left. The problem is one soul has been lost in time and no one, including her soulmate has a clue where she is. Until one day her soul shines through and suddenly everyone is after her.

Mary has spent her entire life in a colorless world. It's not that she doesn't feel, she does, but she feels seperate from life. She lives on the edges.. a Doctor committed to helping those who can not afford to help themselves she is a wonderful woman but somehow she is slowly fading away. Into the nothingness that has become her life and the grey is overtaking everything. Until one day she hears sticks talking.. now that's just odd.. but they were talking about her, her house and her life.. leaving her just a wee bit confused.. As she starts her journey to discover what is going on evil is on it's attack. Her house is burned down, goons attempt to abduct her, an innocent family is gunned down and now she is talking with wolves..

Michael has been angry and lost most of his life. From birth he knew something was missing and at eight he found out.. The other half of his soul and it had been missing for almost a thousand years. He is devoid of life.. while he continues to fight the great evil he dreams of finding his other half. The person who has shared untold lives with him. Finally, one day her light bursts through and Michael rushes to find her. Only once he does he has to explain who and what she is..

As Mary learns where she came from and just what love is evil is just hours behind.. she and Michael must find a way to work together that allows them to accept what is not what was.. and slowly ever so slowly Mary learns to remember. When she does she discovers a way to heal herself and keep her light, her very soul, from bleeding out into the universe and sending out a major homing beacon.. Instead on depending on souls she no longer knows she reaches back into her past and discovers a way to heal herself.. An amazing woman, an eternal healer... Mary balances Michael's warrior and together they manage to complete the bond that could save the universe, in all it's dimensions.

Evil has other plans for them and is not planning on going lightly.. he has managed to learn how to reincarnate without dying, consequently he keeps his memories and does not have to remember everytime. In this he is the winner and his power has grown.. He has friends and connections everywhere. Mary and Michael have the battle to end all battles on their hands and one book will not be enough to win this battle!!

A Brilliant trip into the darkness I absolutely Adored this book. I was held captive from almost the beginning.. each page drawing me further into their world. And made me question the reality of mine. Brilliant Job Ms Harrison!! I can't wait to see what is next for Mary and Michael and all those who fight evil..

Right from the start of this book, you know this is going to be something unique. We begin in the middle of a dream the heroine, Mary, is having. In the dream, Mary is from another dimension and she and others of her kind are deciding to leave their home world forever to chase after an evil being who has escaped their captivity. That's how the book starts and it just keeps getting more and more interesting as it goes along.

Mary is one of the best heroines I've read in a long time. She has her head on straight (which is great since she works in an emergency room), and like all great heroines, she's smart and tough. She also has capabilities that she never imagined. It's a lot of fun to go along with Mary on her literal journey of self-discovery. Another reason I liked her is because she has this incredible ability to just roll with whatever comes at her. For some people, this may come across as Mary not being a believable character. Sure, it doesn't take her long to accept the fact that she's lived many lives, that she's from another dimension (or planet), or any of the other amazing things she discovers. But to me, this just highlighted what a badass Mary is because she hears whatever it is, processes it, and just keeps on going!

Mary isn't completely alone on her journey. She has a tall, handsome stranger named Michael to help her on her way. We quickly find out that Michael is one of the beings from Mary's home world and that he's very significant to Mary. As he reveals more details about who she is and what's going on around them, you're pulled deeper into their story. Michael is a manly man and I had a hard time warming up to him. He's so mission focused and intense that I couldn't get a sense of his personality. But eventually you DO get to see how deeply he cares for Mary and his love for her becomes very apparent. I loved watching Mary and Michael reconnect so slowly. I can honestly say that I don't think I would have cared whether or not Mary and Michael ended up together because they were both so honest about what they were feeling.

Mary and Michael have all kinds of powers like human telepathy, animal telepathy, super-human strength, etc. The story and the characters all had a Native American vibe, with the speaking to animals and wind spirits and ancient knowledge, although it isn't over the top with mystical/spiritual imagery or anything. That's another reason why I felt RISING DARKNESS is so unique. To top it all off, Thea Harrison has SUCH a gift for writing ANY imagery in this book that I'm angry I've never read her before!

BOTTOM LINE
RISING DARKNESS is a great book! I'm not quite sure how to accurately describe it except to say that this is a very rich story. The imagery is beautiful and the characters are vivid. This may be classified as a paranormal romance, but I think anyone who enjoys any kind of romance will love it because it has a little something for everyone.

Note: I received a review copy of this title courtesy of the publisher via NetGalley.
阅读更多
2 个人发现此评论有用

Linda G McKinney
2.0 颗星，最多 5 颗星 Disappointed.
2016年12月23日 - 已在美国亚马逊上发表
已确认购买
Thea's books just get darker and darker. Pia and Dragos are so popular because they are lighthearted and fun. If you like them, you will probably not enjoy this extremely dark and sinister book. Thea has always been on my list of automatic reads. I'm not so sure about whether she still is or not. Oh, and cliffhanger too.
阅读更多
5 个人发现此评论有用
加入亚马逊Prime，从此免运费
亚马逊Prime会员可享海外购美/英/日/德跨境免邮，全年无限次！更有免费无限次阅读电子书服务
> 立即加入
了解我们
合作信息
帮助中心和购物指南