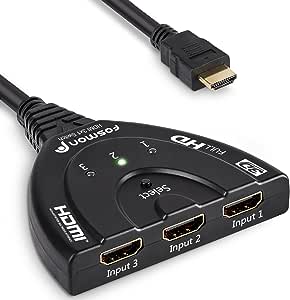 颜色: 全高清1080P
技术细节
更多信息
我来补充
Would you like to tell us about a lower price?

Ran out of HDMI ports? Want to reduce cable clutter? Now you can do all that with Fosmon 3 Port HDMI Intelligent Pigtail Switch. It has a 50 centimeter built-in HDMI output source, and also 3 HDMI input ports. This switch features plug-and-forget auto sensing capability that switches input automatically when a signal is detected. It also has a source select button on the switch to give you the flexibility to switch sources manually between the 3 input sources.

VA Chicago
5.0 颗星，最多 5 颗星 This is right for you if you haven't enough HDMI outlets on the back of your HD TV...
2015年3月2日 - 已在美国亚马逊上发表
颜色: 全高清1080P已确认购买
This is the right product if you're lacking HDMI outlets on your TV. Example: I have only two HDMI ports (outlets) on the back of my HD TV. One is taken up by the cable box. The other has been used for my Blu-Ray player. 2 - 2 = 0. So, when I wanted to attach a new (Amazon) Fire Stick, I thought, "What do I do now? Keep unplugging the Blu-Ray and plugging in the Fire Stick? And vice versa?" And I did for a while before deciding that plugging and unplugging over and over again every day will probably not just a be a pain in the ***, but will (over time) slowly damage the second HDMI outlet on the back of my TV. So, I started looking here for something simple and cheap to give me the ability to have a third product attached to my TV. Here's what I discovered: Nearly every time you look for a solution, you encounter products called "splitters." Here's what a splitter does: It "splits" a signal into two or more "routes" so you can send an identical signal of some sort to two or more devices. Same signal but "split." But that's not what I wanted to do: I just wanted to be able to select either Blu-Ray or Fire Stick to connect to my TV because, remember, I did not have enough HDMI outlets. Now, these splitters are interesting in what they can do, but they cost from $ 30.00 on up to $ 60.00 plus. And most of those that I've seen require an electrical outlet. I believe the extra power is there to boost a signal that's going to go to multiple devices. But with a "switch," it just switches the device you'll be connecting to. One at a time; not all at once. So, I spotted this cheap switch. It is complete with NO extras required. It requires NO power from a wall outlet. No need for worrying about the "People who bought this also bought this" kind of baloney. I plugged it into the second HDMI outlet on the back of my TV (I still have the first outlet dedicated to my cable box). On the other side of this device there are three outlets into which I can plug three devices (my need was to attach only two). There are 1, 2 & 3 outlets with lights showing which device is connected and even a little button so you can switch from one outlet to another. As you switch between devices, the light moves to show which device you're connected to. If you don't have a third device, the light for device # 3 will not light up. Last, the product is designed to intelligently switch to the correct device, depending on which remote you activate. It does work, but remember that your TV set-up might make it necessary for you to press the little button in order to select (in my case) Blu-Ray or Fire Stick. No big deal, but some products, like Sony TV's and Sony Blu-Ray devices often have a "special" relationship with each other, like when, for example, turning on your Blu-Ray can also turn on your TV. I suspect the button is there for situations when the device cannot intelligently determine what it should connect to. The point is, this works, requires no power outlet, and makes plugging-in/un-plugging unnecessary. And at a fraction of the cost of a "splitter." So if it's a matter of increasing the number of HDMI plugs that can go into the back of your TV--this is the right product. NOTE: I have read that some users have had trouble attaching some devices to this switch, like a monitor. Perhaps a powered switch could handle the power issue of a monitor, but for so many of us, who are just trying to increase the number of HDMI devices that can be connected to our televisions, this is a good choice.
阅读更多
975 个人发现此评论有用

Andy
5.0 颗星，最多 5 颗星 Exceeded my expectations
2015年6月1日 - 已在美国亚马逊上发表
颜色: 全高清1080P已确认购买
Received this product last week. I have to say I am very pleased with everything about this product. I bought this to use with my BenQ GL24060HM 24" monitor, as it only has one HDMI port in the back of it. This has totally fixed that problem and has made this monitor's functionality go through the roof. For the price, it has exceeded my expectations. Some of the other reviews have said that the auto switch function hasn't been working properly for them, but I have yet to run into that issue with 2 HDMI's plugged into the pigtail. Whenever I turn my Xbox One on, that is what is displayed. Whenever I turn my Xbox One off, it switches back to displaying my computer screen automatically (which is exactly what it should do).

I also wanted something that would not be hard to hide. With the help of a couple velcro Command Strips, the entire pigtail along with the cord have been mounted to the back of the monitor and out of plain sight.
阅读更多

Susanna
5.0 颗星，最多 5 颗星 Works perfectly & solved my problems
2016年2月28日 - 已在美国亚马逊上发表
颜色: 全高清1080P已确认购买
My son has 3 different HDMI components but only 1 HDMI port in his tv. Multiple times a day I'd have to move his dresser away from the wall to plug and unplug the cord from his devices. No more! Now all he has to do is push a button and he's good to go. It's saved us time and headaches because he'd have to wait for me to come help him and I'd get interrupted all day long.

The only drawback is that the cord isn't very long, so plugged into the wall-mounted tv it hangs down and it, along with the 3 cables plugged into it, are all visible and there's no way to hide it.
阅读更多

Cesar S.
5.0 颗星，最多 5 颗星 Works as intended
2017年6月12日 - 已在美国亚马逊上发表
颜色: 全高清1080P已确认购买
So far it seems to be working good. It seems to get warm/hot very fast. I was concerned about spacing between each input, but as you can see, it works for my configuration which is a fire stick, my PS3 and Chromecast.
阅读更多