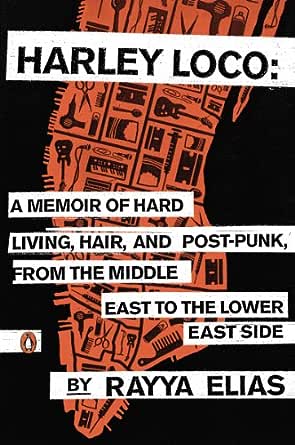 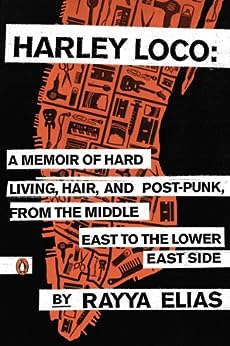 Harley Loco: A Memoir of Hard Living, Hair, and Post-Punk, from the Middle East to the Lower East Side (English Edition) Kindle电子书

“More than a memoir, Elias’ tale –from Syria in the 1960s to New York in the 1980s – offers a street-level snapshot of some of history’s most critical time periods.  Through her intimate storytelling, we get a glimpse into the highly personal struggles of addiction and the powerlessness of those caught in its grip.”
-- Bust Magazine

"Rayya Elias's life reads like Huck Finn on heroin. Her story of fleeing Syria as a child,  growing up in Detroit and spending her young adulthood trolling around the East Village is as American as they come, including as it does immigration, addiction and hard won deliverance. Through it all Elias's voice burns fire hot and is completely engaging."
-- Darcey Steinke

“Rayya’s writing doesn’t come out on the page feeling like it was squeezed from a standard-issue literary toothpaste tube. Instead, her stories are like tough little stray creatures, born in the lowest hollows of the dirtiest street corners, which then – as you watch, breath held – fight their way to rapture.”
-- Elizabeth Gilbert

“Rayya Elias's Harley Loco grabs you by the throat on the very first page, and then never stops shaking you -- even after you've closed the book. It's a punk song disguised as a memoir: raw, slashing, gritty, and shot through with all the wild confusion of youth. But it's also wise, unpredictable, and relentlessly affecting.”
--Jonathan Miles

Rayya Elias was born in Aleppo, Syria, in 1960 and moved to the United States in 1967. She is a musician, hairdresser, and filmmaker, and also sells real estate to make some extra scratch. Elias lives in New York City and has been clean since August 8, 1997.

P. Vallee
4.0 颗星，最多 5 颗星 Couldn't put this book down
2017年8月26日 - 已在美国亚马逊上发表
已确认购买
I read this memoir because Rayya is the partner of a favourite writer, Elizabeth Gilbert. I knew of Rayya's recent health struggles and that she had lived an extraordinary life that took her from a rock star junkie to the insightful, inspirational figure she has become.

Though it is not particularly well-written and could have benefitted from more/better editing, I found this book fascinating. It is true that Rayya here offers little insight and is boldly unapologetic. I imagine that she has more than made amends to the loved ones she hurt during the many years that she was abusive to herself and those around her.

I can't relate to much that Rayya writes about, yet for me that made it all the more interesting. How does someone keep making the same mistakes, and why? How can a person with so much talent and promise throw it away? The answers aren't here but Rayya's incredible story is. If you are curious, you should read it.

Praha2014
5.0 颗星，最多 5 颗星 I couldn’t put this down
2018年10月12日 - 已在美国亚马逊上发表
已确认购买
The raw honesty and the way Rayya owns her life is humbling and admirable. I kept rooting for her and saw myself in so many of the moments in her life albeit never using drugs or being homeless. Thank you for this book.
阅读更多
2 个人发现此评论有用

Amazon Customer
5.0 颗星，最多 5 颗星 I'm sad she passed away
2018年3月5日 - 已在美国亚马逊上发表
已确认购买
A real page turner! I'm sad she passed away; I'm sad for Elizabeth Gilbert, her partner. She lived a very full life; a lot of it was dangerous. For me it was a realistic look at a world I know nothing much about: life on the street and drug addiction..I highly recommend this book.
阅读更多
1 个人发现此评论有用

Elizabeth B.
5.0 颗星，最多 5 颗星 Loco for Harley Loco!
2013年11月23日 - 已在美国亚马逊上发表
已确认购买
A great page turner. I felt the angst the writer was suffering from as a child through adulthood until she could finally deal with the pain head on. That's no easy task --dealing with and admitting the truth--let alone to bear one's troubles to the world. I really enjoy memoirs and this author speaks as if she's right there in your living room telling you about her quite colorful past. I praise her family for sticking by her side but more so, Rayya for her awakening, her seeing there's so much to live for and for channeling both her darkest and brightest thoughts through her love of music, hair styling, writing and more. She's a great talent and inspiration for many.
阅读更多
5 个人发现此评论有用
加入亚马逊Prime，从此免运费
亚马逊Prime会员可享海外购美/英/日/德跨境免邮，全年无限次！更有免费无限次阅读电子书服务
> 立即加入
了解我们
合作信息
帮助中心和购物指南