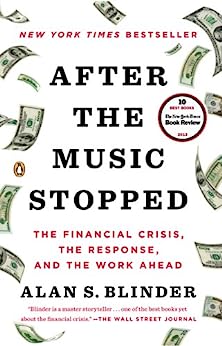 After the Music Stopped: The Financial Crisis, the Response, and the Work Ahead (English Edition) Kindle电子书

"Blinder's book deserves its likely place near the top of reading lists about the crisis. It is the best comprehensive history of the episode... A riveting tale." - Financial Times

One of our wisest and most clear-eyed economic thinkers offers a masterful narrative of the crisis and its lessons.

Many fine books on the financial crisis were first drafts of history—books written to fill the need for immediate understanding. Alan S. Blinder, esteemed Princeton professor, Wall Street Journal columnist, and former vice chairman of the Federal Reserve Board, held off, taking the time to understand the crisis and to think his way through to a truly comprehensive and coherent narrative of how the worst economic crisis in postwar American history happened, what the government did to fight it, and what we can do from here—mired as we still are in its wreckage.

With bracing clarity, Blinder shows us how the U.S. financial system, which had grown far too complex for its own good—and too unregulated for the public good—experienced a perfect storm beginning in 2007. Things started unraveling when the much-chronicled housing bubble burst, but the ensuing implosion of what Blinder calls the “bond bubble” was larger and more devastating. Some people think of the financial industry as a sideshow with little relevance to the real economy—where the jobs, factories, and shops are. But finance is more like the circulatory system of the economic body: if the blood stops flowing, the body goes into cardiac arrest. When America’s financial structure crumbled, the damage proved to be not only deep, but wide. It took the crisis for the world to discover, to its horror, just how truly interconnected—and fragile—the global financial system is. Some observers argue that large global forces were the major culprits of the crisis. Blinder disagrees, arguing that the problem started in the U.S. and was pushed abroad, as complex, opaque, and overrated investment products were exported to a hungry world, which was nearly poisoned by them.

The second part of the story explains how American and international government intervention kept us from a total meltdown. Many of the U.S. government’s actions, particularly the Fed’s, were previously unimaginable. And to an amazing—and certainly misunderstood—extent, they worked. The worst did not happen. Blinder offers clear-eyed answers to the questions still before us, even if some of the choices ahead are as divisive as they are unavoidable. After the Music Stopped is an essential history that we cannot afford to forget, because one thing history teaches is that it will happen again.
阅读更多
›  查看更多商品促销信息