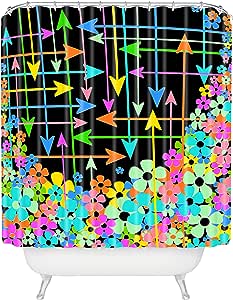 Who says bathrooms can't be fun? To get the most bang for your buck, start with an artistic, inventive shower curtain. This woven polyester shower curtain features a vibrant printed front and white back and includes 12 buttonhole openings at the top (rings not included). While water resistant, we recommend using a clear shower curtain liners for best results (liner not included). Based in Denver, Colorado, DENY Designs is a modern, think-outside-the-box home furnishings company. DENY empowers its customers to transform dull, everyday household accessories into fun and original statement. With each purchase, our team of talented artists earn part of the proceeds, enabling DENY to support art communities all over the world while also spreading the creative love!

BSL
4.0 颗星，最多 5 颗星 beautiful!
2015年7月13日 - 已在美国亚马逊上发表
已确认购买
I wish there was an option for a longer curtain! Otherwise this would get 5 stars
阅读更多

Barbara Pevzner
5.0 颗星，最多 5 颗星 stunning shower curtain
2013年12月19日 - 已在美国亚马逊上发表
已确认购买
I was very pleased with the quality and vibrant colors. This will be a great addition to my bathroom facelift project
阅读更多

Becky B
5.0 颗星，最多 5 颗星 Even better than it looks in the photo!
2013年7月22日 - 已在美国亚马逊上发表
已确认购买
I found this shower curtain inspiring! I ended up looking through the ENTIRE DENY Designs Collections and it felt like I had my own personal art viewing show. What a great idea, making the shower curtain a focal point in a bathroom by making an art duplicate shower curtain! The shower curtain is typically the biggest thing in the bathroom and most people do just something plain or boring. I ended up redecorating the whole bathroom around the shower curtain, something I had never done before. You might hesitate to spend around $100 for 'just' a shower curtain, but if you did a whole remodel, new tile, new cabinets, new flooring, etc, that will be anywhere from $5000 and up. I found this a much easier and cheaper way to do a visual remodel for now!

Consider picking a DENY shower curtain that will blend in with your current tile/surface cover, decorate around that and you'll find yourself with an eye-catching bathroom, instead of something that is usually pretty forgettable.

Another plus: I found this particular one in the Amazon Warehouse, which I normally don't go to. It was supposed to have some flaw, but honestly, I couldn't find it.