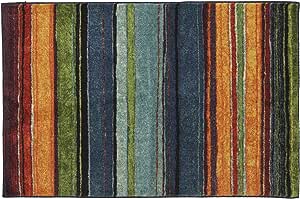 About Mohawk Industries Backed by 125 years of excellence, Mohawk Industries is one of the world's leading producers of area rugs. This remarkable company was founded in 1878 when four brothers from the Shuttleworth family brought a number of secondhand looms from England to New York. Thanks to their dedication to quality, innovation, and excellent customer service, Mohawk is now the most recognized carpet brand in the country, responsible for a variety of popular and prestigious names in the industry. The company is based in Calhoun, Georgia, where their high-quality, value-oriented rugs are designed, manufactured, and marketed. Stain- and fade-resistant. 100% nylon - durable, easy to clean. Latex backing for slip resistance and moisture resistance. Machine-wash separately on cold with mild detergent. Non-chlorine bleach when needed. Tumble-dry on low setting.

Haneen Yahya
5.0 颗星，最多 5 颗星 PERFECT
2015年11月4日 - 已在美国亚马逊上发表
已确认购买
I've been looking for a hallway rug for so long, I have a 37 feet hallway, its so hard to find a long pretty rug, I finally made the choice to order 3 same size rugs, I put the rugs on the floor close to each other, when you look at it you will think its oljust one rug not 3 ! love the colors. Cleaned it twice with my Bissel carpet cleaner and it still new ans looks great .Highly recommender.
阅读更多

SeattleBookMama
4.0 颗星，最多 5 颗星 Better Than Expected, and the Dog Loves It
2018年5月17日 - 已在美国亚马逊上发表
已确认购买
We recently changed our upstairs hallway flooring from wall-to-wall carpet to a laminate, and the senior beagle could hardly keep his feet under him because it's so slippery. We decided we needed a hallway runner.

I have a steadfast rule about this type of home furnishing, and that's don't spend real money for it. If you do, it just invites conflict. Someone spills something, drops something, dribbles something, and next thing you know it's "Look what you've done to my rug." No no no. I have tiny grandchildren, and so I won't buy a rug I cannot afford to replace. Family first, then furnishings.

That said, I had a surprisingly hard time finding a runner. I had expected to go with a solid neutral color, but a beige would be too close to the color of the floor--blah--and we had painted a wall a shade of blue that was hard to coordinate. A blue gray won't work there, and neither will a royal blue. It came down to two (cheap) striped runners that would work in this space, and we went with this one. When it came, it was packaged in a transparent plastic bag and I said, What have I done? This is ugly. But once it was out of the bag and placed in the hallway, I completely changed my mind. It works great with the wall and since there's no other busy color there, it adds interest. We are very pleased.

The synthetic used to make it is fairly heavy and doesn't require a pad; it's got a nonslip back and stays where I want it.

I have given this rug four stars because of course, you can spend more money and get a nice natural fabric of some sort. But of course, then you'd have to spend more money. If you want an expensive-looking rug, it's most likely going to be expensive. So as cheap rugs go, this is really a five, but because there are house-proud people out there that should not be misled, I am calling it four.
阅读更多

R. S. McGowan
5.0 颗星，最多 5 颗星 Good rug - buy it from Sim Supply
2016年5月23日 - 已在美国亚马逊上发表
已确认购买
We just had our pine floors refinished. Being pine floors even the best polyurethane probably won't hold up too well so we bought one of these rugs for the kitchen to go in front of the sink. It looked really good, was non-skid, and not too expensive. Well, it didn't come and it didn't come and it didn't come, but we kept getting messages that shipping had been delayed a couple of days. We cancelled the order and switched from the "prime" supplier to Sim Supply. The rug came right away.
We liked it and bought another from Sim to go in front of the dishwasher. Then there was that empty spot in front of the stove. Yeah, we bought a third one. Each time delivery was within a few days.
We could have saved 12 bucks on shipping if we had bought them all at once. In any case, Sim was no more expensive than the "prime" option - which never came.
Now for that spot in front of the refrigerator.
阅读更多

Gayle
5.0 颗星，最多 5 颗星 The BEST rugs I've ever bought, I've had them for over a year, and they are washable and keep looking great!
2018年6月22日 - 已在美国亚马逊上发表
已确认购买
Well, my bad...I should have written this review when I purchased these in May 2017, but I guess I did not. I purchased 4 of these runners, and wow, they are WONDERFUL! I go through runner rugs a lot! I usually buy maybe 6 per year, cause they lose their non stick backing, etc. I have 3 senior dogs and a senior cat, so accidents happen. When that happens, I just toss these rugs into my front load washer (disclaimer: the manufacturer does NOT recommend this) and hang them to dry (I do not put them in the dryer). Well, it's been over a year, and I've watched each of these rugs over this year probably once every 2 months or so (not always due to potty accidents, sometimes just to clean them from muddy paws, etc). These rugs are STILL beautiful, and STILL have their awesome non-stick backing intact. I mentioned to hubby that I should buy some more, cause these are truly the best rugs I've ever bought.
阅读更多
12 个人发现此评论有用

Absolem
5.0 颗星，最多 5 颗星 Adds a pop of color
2014年4月21日 - 已在美国亚马逊上发表
尺寸: 2'6x3'10颜色: 多色已确认购买
Excellent rug, well made, doesn't shred or get loose threads. It stays in place and the colors are just as they appear. Unfortunately when it first arrived it smelled, to be blunt, like farts, due to the rubber backing. I aired it outside for a few hours and that seemed to do the trick on the fabric -however don't ever put your nose up to the back. Just don't. Put the rug on your floor and be happy with how it looks. DON'T SMELL IT.
阅读更多
40 个人发现此评论有用
加入亚马逊Prime，从此免运费
亚马逊Prime会员可享海外购美/英/日/德跨境免邮，全年无限次！更有免费无限次阅读电子书服务
> 立即加入
了解我们
合作信息
帮助中心和购物指南