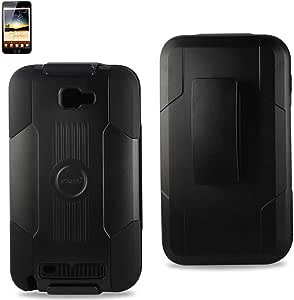 D. DEGEORGE
2.0 颗星，最多 5 颗星 Potential damage to screen when removing from holster
2012年12月12日 - 已在美国亚马逊上发表
颜色: Black已确认购买
This case fits the Galaxy Note, but only barely. To its credit, and for a very reasonable price, it is made of good quality materials: the combination of rubber and silicon would appear to provide superior protection if the Note were to be dropped while within.

This case & holster present two problems, both of which can be hazardous to one's Galaxy Note: (1) the case, holding the Note, can slip out of the holster, especially if it is worn horizontally; and (2) the side tab of the holster will scrape the glass face of the Note as one removes the Note in its case from the holster unless one carefully uses two hands; and one will likely have to remove the whole holster from one's belt in order to do so. Yes, I am saying that this case/holster combo gives one the worst of both worlds--it is both too easy and too difficult to remove the case from the holster!

[Note: There was previously some confusion in Amazon's description about for which exact Galaxy Note model(s) this was designed (the description has since been corrected), leading me to mention the possibility that this product may have been intended for a variant of the Note that might differ in some small physical attributes from the AT&T version, the i717. Many of the cases listed on Amazon list the model number for the Galaxy Note I as i9220 (which, along with N7000, is the international version), and I have finally been able to verify that the external physical characteristics of the i9220 and i717 are identical as far as fitting a case is concerned. Thus there's really no excuse for the ill-fit of this case, which must apply equally to the AT&T and international models. Knowing this has caused me to reduce my rating to two stars.]

There is another product DC Black Belt Clip Holster Case Shell for AT&T Samsung Galaxy Note LTE i9220 i717 Shellster + Kickstand Stand Horizontal Ribbed Design Shellster that is better designed, but alas made of poor materials--for me that product lasted only six months before falling apart. The replacement (presumably identical) shell was even more poorly made; and yet I think it is a better option than the subject of this review; at $5 each, just order several so that you have a replacement on hand when the first one or two wear out. By the way, returning to the issue of protection for the Note in the event that it's dropped, when the combo referenced in this paragraph failed (the holster clip snapped), it threw the Note to the floor, and I attribute the lack of damage to the Note to the protective qualities of the case--this in spite of the fact that its generally poor material quality and lack of soft rubber would at first glance seem not to offer that much shock absorption; but counter-intuitively, a harder case may actually be as good as, or even better than, a softer one.

Amazon Customer
4.0 颗星，最多 5 颗星 Beats OtterBox
2013年8月17日 - 已在美国亚马逊上发表
颜色: Black已确认购买
After TWO OtterBox belt clips broke, I thought I would try this case for my Note I717. I't a durable case with the rubber protector and the hard case that clips to the hard plastic holster, which by the way doesn't make it as big like the OB does . This case does not disappoint. I've dropped my phone from 20 ft when it got caught up on a safety harness (my fault i should have taken the phone off) and yes the screen did have some cracks, but it still worked. Since getting a replacement phone, I've used this case again and yes I've dropped the phone a couple of times(from a standing height) with no damages at all. I will switch from this case to a pouch with a belt LOOP now and then but if you want a durable case for a VERY reasonable price this is the case to get. From someone who doesn't coddle their phone, but uses it extensively, i would highly recommend this case. Oh and that being said because I do use my phone alot during the day I have to change batteries at least once sometimes twice a day, the ease of removing the case from the phone is quick and easy, and just as easy to put it back on. The rubber skin fits easily and the hard case snaps right on, a little adjustment on the rubber skin and it fits perfect. Because this case doesn't have a plastic screen covering, I invested in a good screen protector that i had installed at the dealer. My phone has never felt so loved and protected :-)
阅读更多

Dana Dorsey
2.0 颗星，最多 5 颗星 I Know why This didn't work for me
2013年8月28日 - 已在美国亚马逊上发表
颜色: Black已确认购买
I was very hesitant to order this combo because of the price. (you get what you pay for) That said, the case actually was made fairly well. Here is the problem - which is more user error - The reason people are not liking this case for their Galaxy Note 2 is because it's not for the GN2... it's for the GN1. Unless it specifically states this case is for a Galaxy Note 2, you can bet that it fits its predecessor. The silicone case just didn't fit properly and I thought to myself that it was Odd that the cut-outs for the camera didn't align very well. Then I tried the holster... That was as dead giveaway. The GN2 is slightly taller than the GN1 and it made since why the case and holster just was a tad off in fit.
阅读更多

Big V
4.0 颗星，最多 5 颗星 Tight fit for ATT version Galaxy Note
2013年2月2日 - 已在美国亚马逊上发表
颜色: Black已确认购买
This case does fit, but I had to take it completely apart, put the rubber on first, then the outer plastic shell, then it fit (just barely). After all that I will say it is very well protected. I would have no qualms about unintentionally dropping the phone.

I also like the holster, it can twist and turn and when on a desk it will properly hold your device in either landscape or portrait position and the viewing angles can be adjusted, great design.

My only gripe is that when placed in the belt clip holster you CAN'T charge the device, the charging port is blocked, but for this price that is a minor flaw but one none-the less.