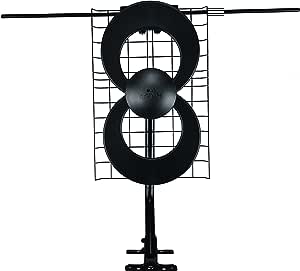 The ClearStream 2V antenna uses patented technology to receive TV signals 60 miles away from broadcast towers. Rated 4.5 stars, this antenna is ideal for suburban and rural areas where heavy foliage or roofing materials reduce the incoming signal. No other antenna can match its performance in such a compact form.

A Leader in Cutting-Edge Antenna Technology

Why do our antennas outperform the competition? The proof is in the patented loop design. The ClearStream series is engineered to respond to a greater range of frequencies along with a wide beam angle eliminating the need for rotation. In addition to the loop technology, the reflector focuses the antennas power for added range and also provides protection against multipath interference. Antennas Direct is dedicated to providing superior antennas supported by a lifetime warranty.

Set Up is Easy

Locate the broadcast towers serving your area at the antennapoint website. Place indoors, in the attic, or outdoors for best results. Connect one end of a coaxial cable to the antenna and the other end to your TV. Scan for the available channels using your TV remote control. Try several locations to find the best reception and remember to scan for channels at each location. Enjoy all your favorite local and network shows in Full HD 1080 where available.

Reduce Your Monthly TV Bill to $0

You can now experience HDTV in the highest quality picture and sound available. Over-the-air broadcasts are transmitted in crystal clear Full HD 1080; far less compressed than what cable and satellite offer. Many local broadcasts are digitally aired in 5.1 Surround Sound giving you the ultimate sound stage for watching live television. With a digital antenna you can receive free local news, weather, kids shows, sports, cooking, shopping, and sitcoms from networks like ABC, NBC, CBS, FOX, PBS, CW, ION, and much more with no cost or contracts. And broadcast TV won't be interrupted from service drop outs (ehemm satellite). Quick fact: local sports are broadcast free over-the-air. You just need an antenna.

1. Worked better than one of those flat rectangular antennas. (The Channel Master rectangular one is still pretty good.). The various review sites, e.g., Wired, were right about this antenna being a good one.

2. The cable comes with easy-to-turn knobs for attaching. Just use your fingers. So much better than the old type that require open ended, perfectly sized wrenches.

3. The cable is separate, not built in, meaning less wear and tear and the option to use a different cable if you desire.

4. The circular design is elegant.

5. Its behavior changes over time and with weather, which is true of all these OTA antennas. Just be aware that you may not get perfect, cable-like, steady reception all the time!

6. Also, a nearby station changed its signal in some way and it became impossible to get a decent signal through our Roamio (TiVo). That station, well, three to be exact as it affected all the substations, ended up with staticky picture and intermittent sound. It was unbearable to watch.

Found a solution, however, which I present at the end!

7. The stickiness wears out. I did clean it, which restores some of its gripiness, but the large ”heavy” cable connector section pulls it down off the wall. We had to get small stick 'ems to keep it up. No big deal but a set of them should be provided.

8. ALERT: It is reversible, but you have to decide which side to show AT THE START! You cannot change your mind later as the sticky pad goes on ONLY ONCE! They really should include two sticky pads, so that you have the option of reversing it later on — e.g., if you move it somewhere else.

9. The cable is very long, which is handy if you need to run the antenna far away, but is an inconvenience if you put the antenna near the set —there is lots of cable flopping around behind the set. OTOH, being able to put it farther away can get it out of your visual field! See next.

10. Our family room is wood paneled so neither black or white is ideal. We went with black, but it looks odd to have a long black cable snaking up behind the TV set, ending in what looks like a circular clock face. It will catch your eye repeatedly at first, but then one learns to ignore it.

Well, after days of having tried all sorts of locations, different cables, etc., we stumbled across a response to a question on Antenna Direct's website that mentioned using an *attenuator* to handle nearby, strong stations. Their signal can be TOO STEONG for the TV or TiVo, and needs to be weakened or attenuated! It's another reason that amplified antennas often don’t work or make reception worse!

So, we tried that. One simply screws the attenuator (a cylindrical several-inch long item) into the antenna jack of your TV or TiVo and then attaches the antenna cable to it. (We had a couple of attenuators left over from our old MOCA in house system, so we picked the blue labeled one.) They only cost $6-10, so it's definitely worth it.

The pesky stations that we had intractable problems with cleared up fantastically. We went from weak reception, fluctuating around 50 strength on our Roamio TiVo with broken up picture and irritating intermittent sound to CONSISTENT reception, clear sound, and a STRONG signal strength of 72!

——>. FOR NEARBY STRONG STATIONS, GET THEE AN ATTENUATOR!

JG Yahtzee
5.0 颗星，最多 5 颗星 RESEARCHED EXTENSIVELY: READ THIS if you have HEAVY TREE COVER, HIGH PIXELATION or one antenna for MULTIPLE HDTVs!
2017年9月24日 - 已在美国亚马逊上发表
样式: 70 Mile已确认购买
I installed this outdoor antenna with amazing results! Assembly of the antenna was easy, but of course it is dependent on your handiness. Before with inside antennas of every possible type and configuration, I could detect only 20 channels and probably watch 4 (at most) without constant major pixelation. Watching sports became frustrating, and was the last straw to motivate me to get the best outdoor antenna I could find. I have heavy tree cover, and reception is better in the winter when the leaves are off the trees. I live about 35 miles from the TV transmitters too. After installation on the roof pointed to the right direction, I got 60 channels and all of the channels came in clearly! There are still tree tops in the way, but I can now watch football, baseball, and hockey from the local stations (when they are broadcast), with no freezes or pixelation at all!

Some Notes:
1. It was important to use the "Antennas Direct transmitter locator" website to get the direction of the transmitters, and then line it up exactly with the digital compass on iPhone (bluetooth must be on to get the highest accuracy).

2. I also learned a lot about antennas and installation. Watching some YouTube videos, it was recommended to use conductive grease for all of the outdoor coax cable connections, to prevent moisture and provide longer life at the connections. This tube of conductive grease was less than $5, so it was well worth applying it to every connection outside.

3. The cheap cable splitters significantly reduce antenna signal strength and just don't work for antennas! When I placed the antenna, I went through a door to directly connect the cable to the TV to get 60 channels. After confirming direction and that the antenna worked as advertised, I connected to the inside of the house using the existing coax cables and splitters that were already installed. I lost significant antenna signal from even just one two-way splitter. Wow, this was a revelation to me, but then realized that these cheap cable splitters work better for cable TV than for antennas! I went from 60 channels down to 30, and the two stations I really wanted disappeared again. So if this antenna is going to multiple televisions or the coax cable to the TV is longer than 50 feet (mine was 125 feet), it is highly recommended to get the Channel Master amplified signal splitter (2-, 4-, or 8-way amplified splitter). I researched this too, and found that Channel Master had high ratings and good customer service.

4. I got the antenna with both the UHF and VHF antenna. The VHF antenna is the bar across the top, and for $50 less you can just get the UHF antenna. I'm not sure which stations get picked up by the VHF antenna (however I do have some just audio radio stations on TV now) but if the model number has the "V" in it, it probably has the VHF antenna (just look for the dark bar across the top of the figure "8" antennas). If the "V" is missing from the model number, it probably does not have the VHF antenna. That's why you may see some of these antennas that are $50 less expensive than others. This took some research to find this answer too, but I've documented it here to make it easier for others.

It's clear viewing now on every channel! I'm really happy with this antenna, and after the initial investment, I'll save at least $100+ per month from cable TV. I can't say you'll get as good of results as I did, but it has greatly improved my viewing pleasure!
阅读更多
335 个人发现此评论有用

Oscar Sanchez Jr
1.0 颗星，最多 5 颗星 Beware of mis-labeled Clearstream 4's labeled and sent out as 4V's !
2018年11月6日 - 已在美国亚马逊上发表
样式: 70 Mile已确认购买
Would have been nice, but both times I was sent "this" antenna, I was sent the regular 4 instead of the 4V. The first one my technician installed it on the roof as per my instructions, him not even knowing it was the wrong one. I find out when I get home, so now I have to take it down myself AND lost $40 in the process (because I initially paid someone to install it so I don't have to deal with the hassle).

Look at the other customer pictures and the Amazon picture carefully. The 4V has the extra horizontal receptor on the top to one side, mine did not. Check the box before you install it!

Other than that, not difficult to assemble, but to install it on the roof, well that's not always fun nor easy, so 3 stars there. I'll have to actually buy it or another one elsewhere. Oh well, you can't win them all.
阅读更多