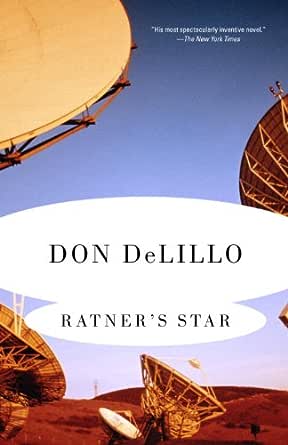 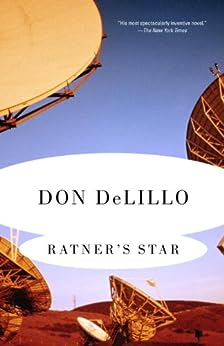 "A mind-expanding trip to the finish line, and full of wit and slapstick as well..." --Washington Post Book World

"Brilliantly...enormously ambitions.... Ratner's Star uses the story of an innocent's 'education' as the launching pad for a provocative, prodigious satire on those pioneers who journey beyond the frontiers of knowledge and end up more ignorant than they were when they set forth." --Chicago Tribune Book World

"This red giant of a book...is not only interesting, but funny (in a nervous kind of way)." --The New York Times Book Review
--此文字指其他 kindle_edition 版本。

Don DeLillo is the author of fifteen novels, including Zero K, Underworld, Falling Man, White Noise, and Libra. He has won the National Book Award, the PEN/Faulkner Award for Fiction, the Jerusalem Prize for his complete body of work, and the William Dean Howells Medal from the American Academy of Arts and Letters. In 2010, he was awarded the PEN/Saul Bellow Prize. The Angel Esmeralda was a finalist for the 2011 Story Prize and the PEN/Faulkner Award for Fiction. In 2012, DeLillo received the Carl Sandburg Literary Award for his body of work. --此文字指其他 kindle_edition 版本。
click to open popover

J. Aaron Bellamy
2.0 颗星，最多 5 颗星 "Something here made no sense."
2018年12月4日 - 已在美国亚马逊上发表
已确认购买
I'm going to start by allowing Ratner's Star (2 stars) to review itself. About midway through, the narrator suggests that:

"Few people here had any link to speak of with others in the structure. An occasional name was mentioned, a hint dropped, and that was the extent of it, a set of rapid sequential jumps, no suggestion that something continuous was taking place."

Near the end, the narrator concludes: "Something here made no sense."

A decisive blow, but fair.

You know those really long jokes that have such a flat and stupid punch line that you realize the joke was really on you all along? Well, that's Ratner's Star, except it goes on for weeks. I get that DeLillo is mocking intellectualism here, he's using the countless opportunities science and scientists provide the uninitiated to call them out as self-serving buffoons, but what results is less thought provoking and more Mel Brooks meets Thomas Pynchon. DeLillo takes measures to reveal that he's in on the joke. At the end, actual bat-shit is being mined out of the same facility the scientists were working in... and indeed, they were behaving bat-shit crazy pretty much the whole time. I like what you did there Don, but don't act like they were on their own, they weren't, you made them, and unforgivably, they weren't always fun to read about... now wait, I could forgive that if they were teaching me something about myself or humanity in general, but they weren't doing that either. So what were they doing?

Beats me. (And that's true. If there's something there, I missed it).

I played a little game as I read. Randomly, I'd select a passage and insert the phrase "full of sound and fury" to see if it jumped out as not belonging when I read it. It Never did. So deconstructed is language here, that words added - phrases added - don't even matter. Funny how when you try so hard to parody something by stripping it of meaning, and then succeed immensely at that goal, you end up with something that has no meaning to anyone beyond the intellectual success of what you've done. It's like reading a long list of ingredients to some toxic food, only to discover at the end, that all those fancy chemical names were just made up. Haha, but who cares.

And that's my review: "Haha, but who cares?"... haha, because some of it was funny. And a lot of it was clever.

Listen, I've read seven books by Don DeLillo, and Ratner's Star won't be my last. And honestly, maybe I'll circle back to it someday, because there is something genius - if off-putting - about it. He's written some truly great books. For me, this wasn't one of them. But if you haven't read DeLillo before, have mercy on yourself and don't start with this one. I'd recommend White Noise.

x_bruce
5.0 颗星，最多 5 颗星 Not for everyone but a challeging, excellent novel
2017年8月10日 - 已在美国亚马逊上发表
已确认购买
Typical DeLillo, dense writing that is rewarding and near poetic. Some readers will find him difficult to read and perhaps find the plot to be slow. If you want a simple read or vacation book this may not be attractive to you.

That said, I loved Ratner's Star and it's blend of satire, humor and literate observations on the human condition.

Don Delillo writes prose that is evocative yet emotive and postmodern with near hallucinogenic moments that morph to the mundane. He is truly a gifted author although modestly challenging. If you enjoy such a challenge you most likely will enjoy this excellent novel.
阅读更多
3 个人发现此评论有用

Richard Weems
3.0 颗星，最多 5 颗星 not DeLillo's best undertaking
2006年12月12日 - 已在美国亚马逊上发表
已确认购买
I must admit that this book, even after two stabs at it, didn't thrill me the way other DeLillo novels can, and I did feel as though I were reading something more by Thomas Pynchon. Many of DeLillo's finest work seems to work on the exploration and twisting of its own metaphor, but filtered through extraordinary but still accessible characters, people who feel both rooted in and confused by the complexities of the world behind them. _Ratner's Star_ seems to want to delve in such a way, but through a situation far more absurdist.

Billy Twilling is a young math Nobel laureate who is pulled into a think tank that bombards him on all sides with eccentrics, from fellow mathematicians to the custodians. Yet many of these characters become redundant through their lack of introduction and propensity for monologue. Many moments of the book read like Kafka and Michio Kaku co-writing an episode of _Dragnet_. Twilling's main job is to decipher a coded message received from outer space, but of course his progress is hindered and his job outright disregarded by many in Field Experiment One. Eventually, the book breaks down in plotline and form itself when Twilling is pulled underground into a new project that is off the charts.

There are many delights in this book--Twilling himself is a wonderfully concise and hilariously unhumorous boy. DeLillo shows his skill at even comic timing on the page. The scenes with a mathematic precurser who has banished himself to a hole in the ground and the meeting of the esteemed Ratner himself during a torch ceremony are wonderful, yet I didn't find the book as a whole challenging with its exploration of metaphor as DeLillo does in later books. There is a wide expanse of characters, but the ecentricities become the focus of the book, not the crucial ideas, and the eccentricities become a little formulaic at times, even in their seeming randomness.
阅读更多
10 个人发现此评论有用
加入亚马逊Prime，从此免运费
亚马逊Prime会员可享海外购美/英/日/德跨境免邮，全年无限次！更有免费无限次阅读电子书服务
> 立即加入
了解我们
合作信息
帮助中心和购物指南