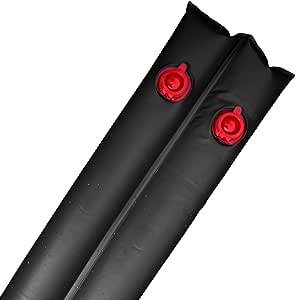 C. Ritz
4.0 颗星，最多 5 颗星 Decent, like the color and use hot water to close, works like a charm
2017年1月14日 - 已在美国亚马逊上发表
尺寸: 8-Feet - Deluxe 16g. - 12-Pack颜色: 黑色已确认购买
These are working well. Got them for our 18x32 pool and all seems good. Two 1/2 tubes leaked, but really that is to be expected with these. I like having the color being black. Don't ask my why, just doesn't feel like the cheap blue ones again. Also, I don't know, maybe they'll warm up faster in the spring. Anyways... you HAVE TO USE THE HOT WATER TRICK. You absolutely can't fill and seal these without using how water. Do it or regret it. Unless you're filling these on a hot day, which may be counter to covering the pool, get a small piece of 2x4 scrap wood and a pitcher of hot water (think coffee machine with no coffee grounds). Place the wood under the top of the bag. i.e. water flow away from the fill area, fill with hose. Fill one side then the other. When both sides are 2/3rds or less full, pour on the hot water. You don't need much. Seal and close with ease. I would buy these again and probably will have to in time. Don't think there's a product out there that will last longer than a few years without at least a few in need of replacement. Good luck and think spring!
阅读更多
7 个人发现此评论有用

They aren’t as large as I had thought them to be based on the sellers photos. So they aren’t particularly heavy.
The caps work,, mostly. They are an SOB to close, but thats why they generally hold water well. If they were easy to close, they would leak because of tolerances being too lose, not because I struggled so bad and didn’t quite seal them all the way. I ended up using a dull phillips head screw driver to cram the male and female seals together. On a couple it wasn’t enough and I had to stomp them in once the male side was in and aligned nice and flat with the female side.

I should have ordered twice as many being in a windy area, the breeze is still causing my cover to shift because these really aren’t very heavy when 70 or so % full. You can’t fill them 100% full or they would pop when it freezes and the water expands. So keep that in mind.

. I have started adding big rocks, instead of buying more of these. The frustration involved in using these and keeping the cover adjusted has convinced me to do the right thing to not waste anymore money, effort or time, and just go buy a good “anchored” safety cover for next season.

Really there’s nothing bad or wrong with these. They for the most part do exactly what they say. But for me, the frustration is not worth it. I’m going to pay for a good cover and be done with the time and aggravation that goes with doing trying to go the cheaper route.

Ussnewco
5.0 颗星，最多 5 颗星 Good tubes
2016年10月18日 - 已在美国亚马逊上发表
尺寸: 10-Feet - Deluxe 16g. - 12-Pack颜色: 黑色已确认购买
Now I just closed my pool and used the water tubes and I'm pretty happy with the results, if that changes I'll update my review. And I'll add a picture if I figure out how. All indications are that they'll do well but I'm very pleased with the first impressions, they seem to be of good quality and thickness and appear to be durable(time will tell). They felt sturdy when I filled them with water, they didn't get too stretchy or feel like they were going to rip or burst while holding the fill opening up. I did find it helpful to press the center of the cap with one thumb and use the other as needed to press down on ant portion caught on the rim to close the cap, it was pretty easy that. I bought the corner pieces in case I had to keep the tubes straight because I have stupid shaped pool, I think officially it called a peanut shape and It's nice and all but it's a pain, do yourself a favor if you have not already bought a pool get a rectangle pool you'll have more room to swim. Oh please forgive the mess the picture is meant to show that the tubes can be shaped any way you like, my stool, hose, cover tool and lots of leaves are clearly visible. Oh one chamber of one tube didn't get sealed during the manufacturing process but I bought extras so it was not a problem for me and I still have a couple left in case of damage this winter.
阅读更多

Consumer of All Things
3.0 颗星，最多 5 颗星 Mostly OK to Good product - some Quality Control problems?
2018年3月13日 - 已在美国亚马逊上发表
尺寸: 10-Feet - Premium 20g. - 12-Pack颜色: 蓝色已确认购买
This s the fourth time I've ordered these in either 8 foot or 10 foot sizes. This last order, at least 2 tubes of one case had one split tube and wouldn't hold any water, right o t of the wrapping. Hope this is a glitch that doesn't happen again - haven't found any good alternatives. In general these are serviceable tubes and hold up OK for a year or two of use - we cover pour pool a lot year around, to keep dirt out during 60-100 day absences, and the sun really plays heck with the PVC.......but have a few going strong even after 3 years...
阅读更多
2 个人发现此评论有用
加入亚马逊Prime，从此免运费
亚马逊Prime会员可享海外购美/英/日/德跨境免邮，全年无限次！更有免费无限次阅读电子书服务
> 立即加入
了解我们
合作信息
帮助中心和购物指南