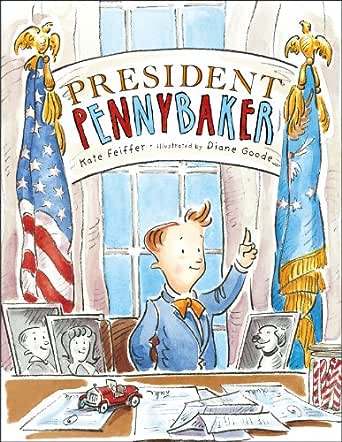 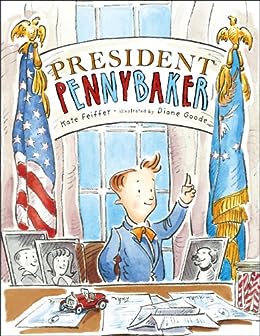 Kate Feiffer is a writer, a filmmaker, and a mother. She is the author of the picture books No Go Sleep!; President Pennybaker; But I Wanted a Baby Brother!; The Wild, Wild Inside; Which Puppy?; My Mom Is Trying to Ruin My Life; and Double Pink; and of the middle-grade novels Signed by Zelda and The Problem with the Puddles. She lives with her family on Martha’s Vineyard, Massachusetts. Visit her at KateFeiffer.com. --此文字指其他 kindle_edition 版本。

"Breezy and charming and pleasingly subversive, the book burrows right into the heart of the Declaration. This little Jeffersonian is exercising his right to the pursuit of happiness..."- Kirkus Reviews --此文字指其他 kindle_edition 版本。

Jennifer A De Lao
5.0 颗星，最多 5 颗星 Great!
2012年12月4日 - 已在美国亚马逊上发表
已确认购买
Great! Used it in my 3rd grade classroom the week of the Presidential Elections. The kids loved it! Thank you!
阅读更多

Cuppycakes808
4.0 颗星，最多 5 颗星 Children running for President... Not a bad idea!
2014年12月9日 - 已在美国亚马逊上发表
My 7 year old daughter thought this book was hilarious. Why maybe because of the way it began, because when one of my daughters want something I answer them with "did you clean your room, did you get your backpack from the middle of the floor, etc.". So from that point she found it relatable. Not only did he come up with the idea of being President he put his ideas into action! I like that because it can teach our kids that no matter how old they are they can try and do anything. He was campaigning and raising money, he had a plan! In the end he realized he just wanted to be a kid and do kid things. This wasn't a serious Presidential book, but a book for kids to enjoy and maybe learn a thing or two about ambition and not stopping until you achieve your goals and for us it served that very purpose. Will be reading it again for bedtime.
阅读更多

When Luke Pennebaker experiences the former (when his dad says he can't watch TV--even after he's done his chores), he tries to change it through the latter: A run for the U.S. Presidency on a "Be Fair" platform.

Like many politicians, Luke starts at the grassroots level and then expands his base. At the school auditorium, he announces a few of his reforms:

As one might imagine, the elementary school kids go wild. But how will this play nationally and how will he get that all-important campaign financing?

Luke and his dog Lilly (oh, this improbable ticket includes Lilly as the VP nominee), solicit pennies for Pennebaker, and tour nationally: A mountaintop in Colorado, "the beach at the Jersey shore," even a dog show in Detroit! Luke, who declares himself a candidate on the "Birthday Party," gets a uniformly warm reception, even though his kid-oriented promises probably wouldn't go over too well with adults: "...kids get treated like everyday is their birthday. They get to eat cake and ice cream and open presents every morning... They can flood the bathroom when they take a bath and keep their room as messy as they want to." (I'm not sure if--even on birthdays--these are generally ok'd by parents!).

A little more implausible (but fun) narrative turns follow: Apparently Luke can run for President, but a cop keeps him from voting because of his age. However, Luke "Fair" message impresses enough votes to win the election! Unfortunately, Luke learns that Fair Play is not all fun and games. In the spirit of the "Birthday Party," his gifts backfire (for example, while every citizen gets free ice cream, "a senator in Maine was allergic to ice cream, And the governor of California wouldn't eat anything with sugar in it." Furthermore, people are constantly calling and asking for things.

After all his efforts, Luke can't do the things he really wants to do. The only fair thing to do, he decides, is to resign. "I want to do what's fair," he said. I'm not really sure why this isn't plain old self-interest rather than being fair, but it's another tiny piece of illogic in the book. Luke resigns after a week, and, on accordance with the Constitution, the Vice President Lilly (his dog) ascends to the Presidency.

I'm also not sure what a young reader takes away from the book. I suppose there's something here about freedom and power conferring responsibility, and it's a little too much to expect that people and circumstance will always be fair. His dad certainly isn't, and his constituents are fair but demanding. However, the book's focus is on entertainment rather than instruction. The journey from elementary school to White House increases in scope and complexity, and Feiffer and illustrator Diane Goode provide some wry visual humor along the way.

Goode's airy watercolors are the most outstanding feature here. Although the book seems set sometime in the late 1940's, the drawing style has the feeling of a comic strip of the 1930's. Luke and his father, for example, sport Dagwood haircuts from the "Blondie" strip, and casual line drawings, animated pictures, and period objects (an old telephone, radio microphones, vintage autos, and sensation-packed newspapers) help the reader buy into this tall tale of mythic America. While Luke's resignation seems a little forced, and we're left wondering whether things will become fairer for him, it's best to treat this as a light story (with superb illustrations on wonderful thick glossy paper) that's entertaining if not compelling.

Janet Boyer
5.0 颗星，最多 5 颗星 My Son Loves This Book (But I Don't)
2008年9月4日 - 已在美国亚马逊上发表
免费商品的 Vine 买家评论( 这是什么？ )
"He told the reporter that in the Birthday Party kids get treated like it's their birthday every day of the year. They get to eat cake and ice cream and open presents every morning. They get to wear shorts in the winter and dirty clothes to fancy parties. They get to play games at school and draw pictures during dinner. They can flood the bathroom when they take a bath and keep their room as messy as they want to." -- From the book

The premise of President Pennybaker is simple: After being told by his father that he can't watch TV (even after he did the chores his Dad reminded him about), Luke Pennybaker realizes that life is not fair. In fact, he feels that if a kid asks one question, he should get one answer--not five more questions in reply.

So after yelling and being sent to his room, he decides that he'll do whatever it takes to make life fair by becoming the youngest boy ever to run for president.

Now, the dust jacket for this book says President Pennybaker is "plausible" and "surprising". Sorry, but this simply isn't true.

For one, if a kid can't even vote (as shown in the book), it surely isn't plausible that one can become president (especially since the U.S. has a minimum age requirement of 35). And the VP choice? A dog.

Not only is the sitting president fully behind Luke's candidacy (he paints the White House orange in support), but so is the entire country.

Now, before you get irritated that I'm applying governmental facts to a children's book, please allow me to remind you that the marketing for this book targets children who may be interested in politics or someday running for president. And, it specifically markets Pennybaker for President as plausible and of interest because it's an election year. (When you read the ending, you'll especially realize how ridiculous this assumption is.)

Even for a "fantasy" book, I felt that the plot was weak and simplistic, with the illustrations lackluster. (What kid WOULDN'T want to make all the rules? Or paint the White House orange or some other color?) There's nothing amusing or engaging about President Pennybaker--at least, from my adult perspective. (And believe me, I LOVE good children's books, as well as juvenile fiction!)

So why the five stars? For some inexplicable reason, my almost 10-year old LOVES this book!

He read it as soon as it arrived. That night, I asked him if he wanted me to read it to him (since I had to read it anyway to review it). He not only sat through it, he enjoyed it!

And today, he went into the other room, picked up this book and read it AGAIN. (This is a kid that has dozens and dozens of books, including recent WALL-E books and other more engaging stories.) He told me he LOVES it. I have never, ever seen him this enthusiastic about a book.

So while I think President Pennybaker isn't worth the paper it's printed on, my son loves it. Perhaps the special child in your life will, too. (There's no accounting for taste when it comes to kids...)
阅读更多
1 个人发现此评论有用

amazonbuyer
4.0 颗星，最多 5 颗星 Young son liked this more than I did...
2008年8月27日 - 已在美国亚马逊上发表
免费商品的 Vine 买家评论( 这是什么？ )
My son has read this book three times since it arrived this morning. I read the book after he did and didn't see what was so compelling. He gave the book 5 stars and I gave it 3 stars. I combined our ratings, thus the 4 stars above.

I asked my son why he likes this book so much. He said he liked it because the "dad acts just like a real dad and the boy acts and thinks just like I do and it is really funny at the end."

The dialogue between the dad and son is realistic and I guess, from a kid's perspective, the book does give a glimpse of the idea that being a president isn't the easiest job in the world.

I thought the book would be more educational but it is really basically for entertainment. Had I read the book first, I might not have even showed it to my son. I'm glad he got to it before I did.
阅读更多
2 个人发现此评论有用
加入亚马逊Prime，从此免运费
亚马逊Prime会员可享海外购美/英/日/德跨境免邮，全年无限次！更有免费无限次阅读电子书服务
> 立即加入
了解我们
合作信息
帮助中心和购物指南