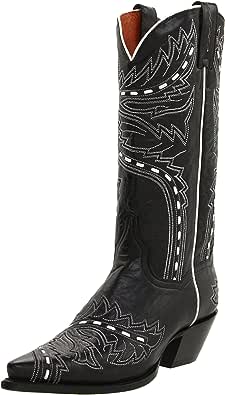 Carey M. Cabe
5.0 颗星，最多 5 颗星 Nice Boots, But try them on locally before You order.
2015年1月14日 - 已在美国亚马逊上发表
已确认购买
The Dan Post Sidewinder Boots are a quality made pair of boots. As stated by another Purchaser, they look better than the pictures depict. In keeping with that line of thinking, I actually read all the reviews written, and noted there was approximately 5-6 People that stated that the boots ran big. I would normally wear a 11-12, so I orderd a 10 1/2 D. The boots were long enough, but REALLY SNUG-
width wise, to the point that had I been going to a store for the purchase and that was the only pair they had I wouldn't have
gotten them. With the Hope they would "loosen up" over time I contacted Amazon to see if They would make an adjustment and Me just keep them, and They did. Since then, through Amazon I have purchased some Lexol Neetsfoot Leather Dressing / which I just have applied to the boots, and am awaiting on them to dry, and it already seems to have Helped on loosing them up. I have already made other boot purchases through Amazon
and had to send them back either due to sizing, or poor quality in several other Brands/which Amazon has been really good about taking them back. All that said, theese Dan Post , and Airat Hotwire Boots are the best pairs quality wise by far - and I'm talking about Big Name Brands. I really don't understand the Companies letting Their product's getting out with the way I received them. Again , in My experience, the other Reviewers were right in saying they run a little big
(Long) , but I found them to run narrow also. PawPaw Cabe

UPDATE - It is now November 2015 & I had a real problem w/these boots. I had actually worn them approx. twice & was going to wear them the other Day & they were hurting My Rt. foot. It turns out that they were a 2nd & NOT A 1st Quality pr of boots- the width of the rt. sole is actually a 1/2" narrower than the left one-CLEARLY A QUALITY ISSUE to which I contacted Dan Post, & They wouldn't make it right-told Me to contact Amazon, which I did, And to My Welcome Surprise Amazon gave Me a Full refund ! Thank You Amazon for Your Understanding & Really Good Business Practices ! PawPaw Cabe

Woodbury Brumet
2.0 颗星，最多 5 颗星 Don't get if you want boots to last more than a year!!!
2016年11月6日 - 已在美国亚马逊上发表
已确认购买
I really love the way these boots look and fit!
Sadly after only a few months of light wear they started to fall apart.
The sole is splitting and the toes wore right through.
I couldn't return them as I had them for too long.
I have written to Dan Post twice and explained the situation.
Thus far they have not even returned my email.
Here is what there warrenty says:

"We know you expect the very best when it comes to your boots, which is why our products are manufactured under rigid quality control standards and are thoroughly inspected.
But every once in a while, a dud slips through..."

Then you are to return to seller for inspection...they won't take it. So now I have some useless leather that cost me over $200.

UPDATE!!!! I have spoken with the folks at Dan Post and they are going to give me a full refund. Thank you Dan Post, I now have the confidence to buy boots from you again!
阅读更多

John R.Licari
5.0 颗星，最多 5 颗星 Dan Post Boots Deliever
2014年2月22日 - 已在美国亚马逊上发表
已确认购买
I had previously purchased a pair of Dan Post in TN several years ago...They were black, beautiful, and I received so many compliments. I was looking for a pair of brown boots for the last couple of years. Something just didn't click until I saw these Sidewinders from Dan Post. Now I can reassure you that the quality and fit is equal to those one may purchase for several hundred dollars more. I am so thrilled with these I can't begin to say. I put them on my feet, a little tight on one foot (to be expected) and within a couple hours walking around the house I couldn't believe how comfortable they were. I couldn't imagine that I just took them out of the box and wore them around the house for a couple hours and they were WONDERFUL! If anyone is considering these, w/out a doubt...buy them. I purchase a 1/2 size smaller after reading all the reviews. I don't really think it would have matter to me. I have the black ones in 10.5 and these in 10...NO real difference! Perhaps it's all in my head, but, I can't tell...LOL! Buy them, you won't be sorry! I love them, and have received many compliments already. Since it's winter upstate NY, I won't wear them to work unless it's a nice day without a lot of salt on sidewalks and parking lots...(hope that makes sense) Enjoy!
阅读更多
3 个人发现此评论有用

L Aebischer
3.0 颗星，最多 5 颗星 I love thes boots But....
2018年9月28日 - 已在美国亚马逊上发表
已确认购买
I have 8 pare of Boots various brands I have Dan Post and they fit good so I was confident that these would also. How ever there is a issue with the heel structure. Inside the boot rubs on my ankle (both sides) very uncomfortable very quickly. I will have to take them to the boot repair guy and see if I can get them fixed I LOVE the look of the boot very Cool
阅读更多