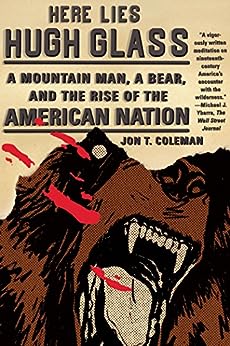 “Richly told . . . [Coleman] masterfully mines what scant life poor Glass left behind (one letter to the parents of a companion killed by the Arikara Indians) to argue convincingly that the bear attack story is one of the contributing factors in how Americans have come to think of themselves.” ―Stephen J. Lyons, Minneapolis Star Tribune

“[Coleman's] writing is certainly audacious, not just in his colorful language . . . but also in his willingness to discard traditional disciplinary boundaries and in his exuberant mixing of history, folklore, literature, popular culture, and the natural sciences.” ―Nathan E. Bender, Library Journal

“[Coleman] shines a pure light on the actual conditions of the working man in the American West, on the fundamental relation between men, animals, and Native Americans, and on the many rascals and scamps, not to mention confidence men and counterfeiters, who are the real source of our greatest national myths.” ―Gaylord Dold, The Wichita Eagle

“In this harrowing and beautifully written book, Jon T. Coleman shows us how backwoods workers experienced a West that left them scarred and mutilated. These are the raw (and bloody) materials for America's tall tales, epic boasts, dime novels, and Wild West medicine shows.” ―Scott Nelson, Legum Professor of History, College of William & Mary

“Almost killed by a grizzly, almost erased by the passage of time, Hugh Glass is resurrected by Jon T. Coleman in this wise and witty book. The American encounter with the dangers of the natural world will never look quite the same again.” ―Karl Jacoby, Professor of History, Brown University

“Jon T. Coleman steers the horrendous story of Hugh Glass through the frontier writer James Hall, Herman Melville's ubiquitous Confidence Man, modern-day survivalism, advertisements for runaways, Richard Henry Dana, Henry David Thoreau, the social lives of grizzly bears, Timothy Flint, Davy Crockett, transnationality, a workingman's history of the fur trade, and much more as he uncovers and adds to Americans' long and unfinished conversation about the West. Some readers will disagree with him, but all of them will have a good time.” ―Paul E. Johnson, Distinguished Professor of History Emeritus, University of South Carolina

“Chomp on Jon T. Coleman's Here Lies Hugh Glass, but beware: it may bite back. The book is a dazzling meditation on men as meat and how we cook up history. Even if you cannot swallow the bear whole, Coleman serves up fricasseed fabulists, the remains of a gnarly mountain man to gnaw on, and a literary feast to digest. Enjoy.” ―Thomas P. Slaughter, Arthur R. Miller Professor of History, University of Rochester

“This fascinating, wonderfully written book makes you think and makes you laugh. Jon T. Coleman tracks the many tales and few facts that surround the legend of Hugh Glass, whose improbable survival and quest for revenge crawls off the page and stays in your head.” ―Clyde A. Milner II, coauthor of As Big as the West: The Pioneer Life of Granville Stuart and coeditor of The Oxford History of the American West

Jon T. Coleman is an associate professor of United States history at the University of Notre Dame. He is the author of Vicious: Wolves and Men in America, which won the W. Turrentine Jackson Prize and the John H. Dunning Prize.

midlander
5.0 颗星，最多 5 颗星 A surprising read
2015年12月7日 - 已在美国亚马逊上发表
已确认购买
I expected this book to be a detailed account of Glass's survival story; it is so much more than that--it's a refreshing, well documented dip into history, endurance, and survivalist trends. I couldn't stop reading.
阅读更多
1 个人发现此评论有用

B. Bates
2.0 颗星，最多 5 颗星 Where is Hugh Glass?
2012年8月27日 - 已在美国亚马逊上发表
已确认购买
This book is like a "where's waldo" picture puzzle - only in this case it is a word puzzle. Where is Hugh Glass? You have to find information about the title subject amid stories of entrepenuers, other historical figures and old west writers. The book actually seems to be an expose on the media and literature of the early 1800's. Which in itself might be ineresting, but the title of this book is deceptive, and although well-written, I would not have purchased a book to read 5% about Hugh Glass and 95% about the times he lived in. The author tends to lose focus at times - going from one period of time to another, and back again. He says that a story or an account is a fabrication, but then goes on to repeat it anyway. I will have to wait for a better book on the actual life of Hugh Glass. As an account of the media in the early 1800's you may be interested. Otherwise pass.
阅读更多
10 个人发现此评论有用

Scatman
4.0 颗星，最多 5 颗星 Love Mountain
2013年11月7日 - 已在美国亚马逊上发表
已确认购买
Book subject was 5 stars as was the purchase experience, but the Author was a hard read to many words to tell the story
阅读更多

Stone06
1.0 颗星，最多 5 颗星 Save your money
2014年10月23日 - 已在美国亚马逊上发表
已确认购买
What a load of hogwash. The author doesn't look at Hugh Glass as a subject. He uses the story of Hugh Glass to paint a political agenda on a history 200 years gone. I couldn't tell if he was running for office, forcing this book on college students, or just trying to act tough to the dead past. Waste of time.
阅读更多
5 个人发现此评论有用