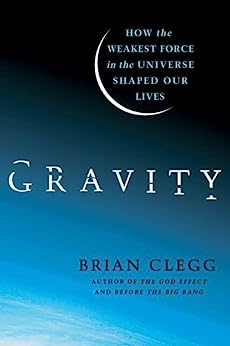 Gravity: How the Weakest Force in the Universe Shaped Our Lives (English Edition) Kindle电子书

A history of gravity, and a study of its importance and relevance to our lives, as well as its influence on other areas of science.

Physicists will tell you that four forces control the universe. Of these, gravity may the most obvious, but it is also the most mysterious. Newton managed to predict the force of gravity but couldn't explain how it worked at a distance. Einstein picked up on the simple premise that gravity and acceleration are interchangeable to devise his mind-bending general relativity, showing how matter warps space and time. Not only did this explain how gravity worked – and how apparently simple gravitation has four separate components – but it predicted everything from black holes to gravity's effect on time. Whether it's the reality of anti-gravity or the unexpected discovery that a ball and a laser beam drop at the same rate, gravity is the force that fascinates.

“Although by far the feeblest of the four universal forces, gravity is the only one we experience continuously. Every inquisitive person should read a book about it, preferably this one . . . Clegg's skills never flag and his account remains lucid and free of jargon, bad jokes, and math phobia.” ―Kirkus (starred review)

“Clegg's accessible presentation offers insight into everything from Aristotelian science to black holes and string theory as it reveals the complexities and surprise of a familiar force that continues to surprise scientists.” ―Publishers Weekly

BRIAN CLEGG is most recently the author of How to Build a Time Machine. He holds a physics degree from Cambridge and has written regular columns, features, and reviews for numerous magazines. He lives in Wiltshire, England, with his wife and two children.

CHAPTER ONE
WHAT GOES UP

Susan Griffith
2.0 颗星，最多 5 颗星 Very elementary.
2022年3月13日 - 已在美国亚马逊上发表
已确认购买
No math of any kind or diagrams. Suitable for advanced middle school students. Gave it a 2 because there were no gross errors of any kind.
阅读更多

'Prof' George T Conway
5.0 颗星，最多 5 颗星 WArping of space-time
2014年4月22日 - 已在美国亚马逊上发表
已确认购买
Brian Clegg's succinct expose of what science has often referred to as the weakest force but which science now suggests is the progenitor of all futures is the paradox of what is 'Gravity'. A clever admix of the historical and the more contemporary thinking that is further infused with detailed analysis, yet this is an eminently readable thesis that folds time and space into the inevitable dance between uncertainty and predictability, between general and special relativity and between action across the 'ether' and across dark matter. If a black hole is indeed a time machine, then gravity must be its timekeeper. I thoroughly recommend this book to all who thirst for knowledge.
阅读更多
2 个人发现此评论有用

Arthur W. Wallace
4.0 颗星，最多 5 颗星 Summary of the understanding of gravity over the last 2500 years
2013年6月8日 - 已在美国亚马逊上发表
已确认购买
I am fascinated by gravity. I would like to understand not just how to accurately calculate its magnitude by Newton's formula or Enstein's General Relativity, I would like to understand how space-time is actually deformed by mass. How is the information that mass is present transmitted to space-time. So, I was disappointed that I didn't really learn anything new in Brian Clegg's book. I did not get my questions answered. The book begins with an interesting historical summary of theories of gravity. He eventually gets to general relativity. I didn't really learn anything new. If one does not have an understanding of Newtonian gravity then this book would be interesting. If one has never read about the development of general relativity, then the history is interesting. For readers who have previously read about Newton and Einstein, there is little new material. There is a very brief mention of quantum gravity and modified theories of gravity that may preclude the need for the invention of dark matter, but the word brief is important. This book is aimed directly at the non-mathematical science enthusiast who wants a historical perspective on gravity and is satisfied with a very limited description of general relativity or other modified theories of gravity. No math is provided. There are brief descriptions of gravitons without much discussion. I didn't get my questions on the mechanism for the deformation of space-time by mass, explained.
阅读更多
6 个人发现此评论有用

Jim Holton
5.0 颗星，最多 5 颗星 Strong Book on a Weak Force
2014年8月18日 - 已在美国亚马逊上发表
已确认购买
Great book on what we know and what we don't know about gravity. It's a refresher on basic physics and the scientific process too! It is written in a very entertaining style and really lays out how our views of gravity have developed throughout history. It traces the understanding of gravity from Newton through Einstein to the quantum guys.
阅读更多
3 个人发现此评论有用