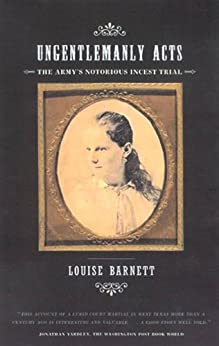 The shocking story behind the U.S. Army's longest court-martial-full of sex, intrigue, and betrayal.

In April 1879, on a remote military base in west Texas, a decorated army officer of dubious moral reputation faced a court-martial. The trial involved shocking issues-of sex and seduction, incest and abduction. The highest figures in the United States Army got involved, and General William Tecumseh Sherman himself made it his personal mission to see that Captain Andrew Geddes was punished for his alleged crime.

But just what had Geddes done? He had spoken out about an "unspeakable" act-he had accused a fellow officer, Louis Orleman, of incest with his teenage daughter, Lillie. The army quickly charged not Orleman but Geddes with "conduct unbecoming a gentleman," for his accusation had come about only because Orleman was at the same time preparing to charge that Geddes himself had attempted the seduction and abduction of the same young lady. Which man was the villain and which the savior?

Louise Barnett's compelling examination of the Geddes drama is at once a suspenseful narrative of a very important trial and a study of prevailing attitudes toward sexuality, parental discipline, the army, and the appropriate division between public and private life. It will enrich any reader's understanding of the tumultuous post-Civil War period, when the United States was striving to define its moral codes anew.

“This account of a lurid court-martial in West Texas more than a century ago is interesting and valuable . . .” ―Jonathan Yardley, The Washington Post Book World

“This exciting book is a carefully crafted and unassuming study of the etiology of incest, cultural mores, and political vengeance.” ―Karl Monger, The Austin Chronicle

Louise Barnett, a professor of English at Rutgers University, is the author, most recently, of Touched by Fire: The Life, Death, and Mythic Afterlife of George Armstrong Custer. She lives in Lancaster, Pennsylvania.