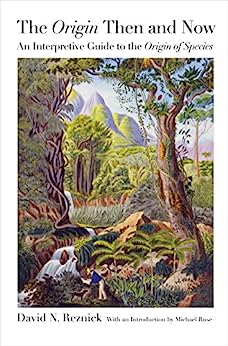 The Origin Then and Now: An Interpretive Guide to the Origin of Species (English Edition) Kindle电子书

Charles Darwin's Origin of Species is one of the most widely cited books in modern science. Yet tackling this classic can be daunting for students and general readers alike because of Darwin's Victorian prose and the complexity and scope of his ideas. The "Origin" Then and Now is a unique guide to Darwin's masterwork, making it accessible to a much wider audience by deconstructing and reorganizing the Origin in a way that allows for a clear explanation of its key concepts. The Origin is examined within the historical context in which it was written, and modern examples are used to reveal how this work remains a relevant and living document for today.

In this eye-opening and accessible guide, David Reznick shows how many peculiarities of the Origin can be explained by the state of science in 1859, helping readers to grasp the true scope of Darwin's departure from the mainstream thinking of his day. He reconciles Darwin's concept of species with our current concept, which has advanced in important ways since Darwin first wrote the Origin, and he demonstrates why Darwin's theory unifies the biological sciences under a single conceptual framework much as Newton did for physics. Drawing liberally from the facsimile of the first edition of the Origin, Reznick enables readers to follow along as Darwin develops his ideas.

The "Origin" Then and Now is an indispensable primer for anyone seeking to understand Darwin's Origin of Species and the ways it has shaped the modern study of evolution.

Sdbmd
5.0 颗星，最多 5 颗星 Darwinism for everyone
2013年4月25日 - 已在美国亚马逊上发表
已确认购买
I was fortunate enough to have Dr. Reznick as a professor when I was an undergrad, many many years ago, so it was a thrill to see a book he had authored. Origin of Species is a book that's forever been on my "must read before I die" list but it's been easy to find excuses not to plow through it. Enter Dr. Reznick's guide.

I found this guide as accessible and easy to follow, despite being years out of my biology classes. The prose is smooth and easy to follow and I felt like I was actually understanding this classic text as well as enjoying the content of it.

I highly recommend this for those specifically interested in Darwin, or those who happen to enjoy reading biology based books for pleasure.