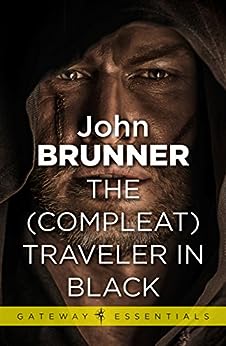 The time was the unguessably remote past - or perhaps the distant future. Throughout the universe, Chaos ruled. Scientific laws of cause and effect held no force; men could not know from one day to the next what to expect from their labours, and even hope seemed foolish.

In this universe there was one man to whom had been entrusted the task of bringing reason and order out of Chaos. He was a quiet man dressed in black who carried a staff made of light, and wherever he went the powers of Chaos swirled around him, buffeted him, tested him. He fought them, and little by little he drove them back.

But the Traveller in Black himself belonged to the anti-science universe. If he succeeded in his task of changing the order of the cosmos, could he continue to live?

Walt Boyes
5.0 颗星，最多 5 颗星 Wonderful to see this back in print
2019年10月31日 - 已在美国亚马逊上发表
已确认购买
The Traveler in Black is one of the iconic fantasy novels of John Brunner, a great writer who is mostly forgotten today. His reputation as a visionary writer is ascendant once again as books like “The Sheep Look Up” and “Shockwave Rider” are once again available...as is “The Complete Traveller in Black.” Brunner was a sharp critic of society, and prescient in his commentary. This book is one of his best, a social commentary masquerading as fantasy. Great book. Great writer. Read his books.
阅读更多
3 个人发现此评论有用

Stephen Bridge
4.0 颗星，最多 5 颗星 Strange combination of fantasy novel and book of parables
2020年2月24日 - 已在美国亚马逊上发表
已确认购买
An odd but fascinating story of a magical traveller whose task, it seems, is to reduce chaos and increase justice by granting wishes, even when the speakers do not understand they are making a true wish. In a sense, This could be looked at as a book which contains 100 brief stories, connected with 5 longer ones. A completely unique book.
阅读更多

John Shannonhouse
5.0 颗星，最多 5 颗星 An unforgettable character
2014年2月5日 - 已在美国亚马逊上发表
已确认购买
The Traveler in Black lives in a world of wild magic, and he seems to be one of the great immortal powers.

But his power is very limited.

He can grant wishes -- the wishes of other people, not his own. And he does, but usually not the way they expect. And he does it when they are not expecting it.

I am sure you have heard: "Be careful what you wish for. You might get it." The Traveler in Black is the personification of that statement.

Still, while he seems very impersonal, he also comes across as a GOOD person. The ones who suffer as a result of his granted wishes deserve it.

And as to leaving the world a better place -- he leaves the world a place with less magic. Every time he grants a wish, some great source of magic disappears. The final story helps explain his long journey.

The Traveler in Black has lived in my imagination for a long time now. He is a presence you cannot forget, unique in fantasy.

Ages ago I introduced him into my Dungeons and Dragons game. It was interesting to say how carefully players started making sure they did not phrase stupid things as wishes, and how often they still failed in doing so.