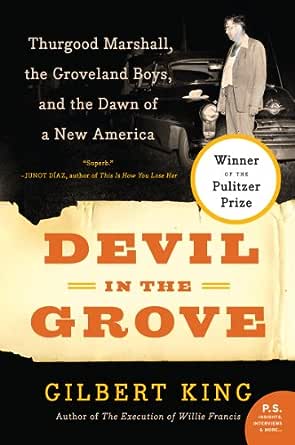 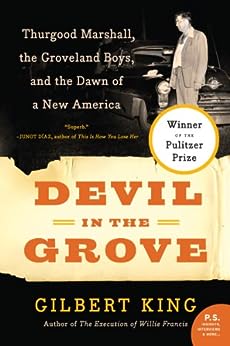 Devil in the Grove: Thurgood Marshall, the Groveland Boys, and the Dawn of a New America (English Edition) Kindle电子书

“This story about four young black men who were accused of the rape of a white woman in Lake County, Fla., in 1949 — and what the local sheriff and his cronies, who were itching for a lynching, got away with — is a must-read, cannot-put-down history.” (Thomas Friedman, New York Times)

“A powerful and well-told drama of Southern injustice.” (The Chicago Tribune)

“Devil in the Grove is a compelling look at the case that forged Thurgood Marshall’s perception of himself as a crusader for civil rights. . . . King’s style [is] at once suspenseful and historically meticulous” (Christian Science Monitor)

“Superb.” (Junot Diaz, author of This Is How You Lose Her)

“Recreates an important yet overlooked moment in American history with a chilling, atmospheric narrative that reads more like a Southern Gothic novel than a work of history.” (Salon)

“The story’s drama and pathos make it a page-turner, but King’s attention to detail, fresh material, and evenhanded treatment of the villains make it a worthy contribution to the history of the period, while offering valuable insight into Marshall’s work and life.” (Publishers Weekly)

“A thoroughgoing study of one of the most important civil-rights cases argued by Thurgood Marshall in dismantling Jim Crow strictures. . . . Deeply researched and superbly composed.” (Kirkus Reviews (starred review))

Gilbert King has written about U.S. Supreme Court history for the New York Times and the Washington Post, and is a featured contributor to Smithsonian magazine's history blog, Past Imperfect. He is the author of The Execution of Willie Francis: Race, Murder, and the Search for Justice in the American South. He lives in New York City with his wife and two daughters.

Amazon Customer
5.0 颗星，最多 5 颗星 A Homeboy Learned About His Home
2016年9月8日 - 已在美国亚马逊上发表
已确认购买
I'm a native of Lake County, born 1962, raised there, graduated HS there, still call it "home." Knew the sheriff, heard the rumors. But NEVER this story, or that Thurgood came. It angered me, learning so many decades later through this book, what had happened. I reached out to the author about how this revelation affected me. The book is incredibly powerful, the author an incredible story-teller of a painful episode incredibly well sourced and researched. It is a gift. It is moving. It is timely: white people like me will never grasp fully the black experience of rightfully questioning and having trust issues with the justice system that historically failed them. Read this, let it move you, let it open your eyes and your mind. It did it for me, and I'm grateful to Gilbert King for his capable voice and tone here. LTK
阅读更多
116 个人发现此评论有用

Central Florida Man
4.0 颗星，最多 5 颗星 Great reporting, inept storytelling
2018年7月10日 - 已在美国亚马逊上发表
已确认购买
Great reporting, poor storytelling. Narrative zigzags back and forth and there are many instances of repetition. The description of developments in the case often pauses dead in the water for many pages to allow the author to digress on ancillary matters. A good editor could have cut this by one-third. Putting the name of Thurgood Marshall in the title of the book was a good marketing move, but in truth Marshall was not the trial attorney, nor the initial appeal lawyer. Franklin Williams, a rival of Marshall within the NAACP, was the courageous trial lawyer and handled the initial appeal; Marshall treated Williams pretty poorly throughout the progress of the case. Other heroes of the story are Norman Bunin, a reporter with the St. Petersburg Times who uncovered key evidence for the defense after the initial trial, and Harry T. Moore, slain Florida NAACP leader. I understand that there is a book by Gary Corsair that tells this story more straightforwardly, but I have not read it.
阅读更多
13 个人发现此评论有用

rossofinertia
5.0 颗星，最多 5 颗星 Little known turning point in the battle for civil rights
2016年9月14日 - 已在美国亚马逊上发表
已确认购买
While at times the book's exhaustive detail of the players in the case of the framed Groveland Boys can be a tad repetitive-- yes, we understand, Sheriff McCall is a true demon-- there is more than enough here to educate and hold the reader in rapt attention. Thurgood Marshall is a true American hero, that is not up for debate. That said, the supporting cast at the NAACP, the ancillary team members defending the Groveland Boys (many of whom were white and Jewish), host of heroic journalists who also risked life and limb to see the truth come to light, and even the few Floridians who were brave enough to change their minds are the real story here.
I recommend this book.
阅读更多
16 个人发现此评论有用
加入亚马逊Prime，从此免运费
亚马逊Prime会员可享海外购美/英/日/德跨境免邮，全年无限次！更有免费无限次阅读电子书服务
> 立即加入
了解我们
合作信息
帮助中心和购物指南