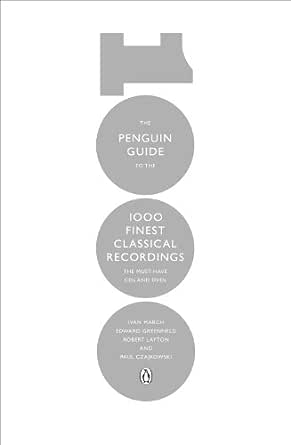 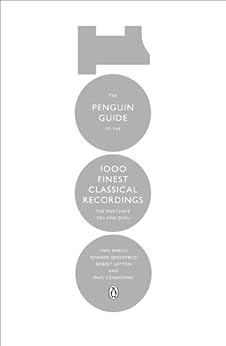 The Penguin Guide to the 1000 Finest Classical Recordings: The Must-Have CDs and DVDs (English Edition) Kindle电子书

Phil in Magnolia
3.0 颗星，最多 5 颗星 Of interest but not a mandatory reference
2017年1月3日 - 已在美国亚马逊上发表
已确认购买
I purchased this guide with some hesitation, knowing that it took a different approach to the selection of classical recordings included compared to Penguin's traditional annual compilation.

The contents are of interest as a supplement to my other resources but I would not consider this to be a useful stand-alone reference. And in fact Penguin had been fighting a losing battle for some time, leading up to this publication in 2011. Their annual guides were becoming very large, not really unwieldy but awkward to use. Those of us who did (and still do) consider them a valuable reference were less concerned about the size of the volume as we were with the contents and the relative completeness. The annual challenge regarding what to add and what to remove, and how different we should expect the guide to be from one year to another were all things that every user had their own opinion on. Finally Penguin seems to have decided that the annual guide was impractical to update on that basis, and with this '1000 Finest' guide they tried to offer something different but still (hopefully) useful.

For my own reference I continue to use


The Penguin Guide to Recorded Classical Music 2008 , which I consider to be recent enough for regular use in combination with the other resources available on the web.
阅读更多
6 个人发现此评论有用

Diogenes
2.0 颗星，最多 5 颗星 Only if you have all the other guides
2012年11月19日 - 已在美国亚马逊上发表
已确认购买
This book is of some minor interest after you have looked through all the more comprehensive guides (Grammophone, AllMusic, Third Ear, or of course, the earlier, much more complete Penguin Guides). But do not, under any circumstances, make this your first or main guide, especially if you are just getting started in classical music and want help in finding your way around. There are only a small number of reviews here, in part because only one review is given for each musical work, i.e. the editors' choice. And worse yet, rather than include a comprehensive selection of major works for a given composer, this new Penguin Guide just lists a few compositions, choosing instead to include works from a vast number of relatively obscure composers, often at the expense of more important figures who are omitted altogether. For example, the towering figure of Gaspard Le Roux is included, while Gyorgy Ligeti, one of the most important composers of the twentieth century, is totally omitted. Of the former, the "Guide" itself says: "Little is known about Gaspard Le Roux except that his music was actually published. . . . ." This one sentence alone makes it clear that the Monty Python crew didn't have to look very far for material in the British Isles!
阅读更多
13 个人发现此评论有用

musicisitnatch
1.0 颗星，最多 5 颗星 The Penguin has gone the way of the Dodo
2011年10月24日 - 已在美国亚马逊上发表
已确认购买
Folks, it's all over. It's the end of an era. What we used to know as "The Penguin Guide to Recorded Classical Music" (last edition was 2010), has gone from approx. 1500 pages down to a mere 400 pages. Truth be told, the writing had been on the wall for some time. Those of us waiting for the 2011 edition knew something was afoot. Why the delay? Basically, Penguin has thrown in the towel. In their Introduction to this edition they state the the guide "had reached it's maximum capacity" and that their "chosen answer is to plan a more compact survey centering on 1,000 of the very finest issues". No apologies. Just that. THEIR chosen path. What about the buying Penguin Guide public?

I, for one, am bitterly disappointed in this decision. As we all know, there's a deluge of issues/reissues of great classical/historical performances these days, and a major factor must have been: How to keep up?
But surely, Penguin, with all of their resources, could have gone another route? One would have been to continue the "by composer" approach of the original guide, and then (somewhat like their earlier Year Books), published a "by artist" guide separately. They could have introduced a "by conductor" guide also. Maybe have opera spun off etc.etc.

Instead of that we now get (mostly), one pick of various repertoire, still organized by composer. And now, unlike the original format, we now don't even get the entire repertoire of a composer. Basically a "greatest hits" compilation. And if making the guide more compact was the priority why does Percy Grainger get 5 pages. (Brahms gets just over 3). Under Schumann, you won't find listed Furtwangler's 4th with the Berlin Philharmonic. It's not much more than a glorified version of what they did in the back pages of the 2003/4 Penguin Guide Edition.

One of the primary beauties of the old Penguin Guide was that one did read discussions of various interpretations.

This book will have some interest inasmuch as newer issues have come out since the 2010 Guide. (Example: The 21 CD Box Set: Furtwangler - The Great EMI Recordings"). But outside of that it is a bitter disappointment to see this guide reduced to a shell of what it once was. It could serve a function to someone who is virtually entirely new to the classical music arena. But outside of that I can only say that the Penguin Guide has gone the way of the brick and mortar record stores.

At the begining of the afore-mentioned 2003/4 Penguin Guide they stated that they "seek to provide a comprehensive, yet selective coverage of this vast repertoire", and "is in itself of fascinating documentary value".

Sadly, it's much, much more selective, no longer comprehensive, and as a result, not only has it lost it's documentary value, but has also lost it's heart. I will miss the eager anticipation that came with browsing the latest edition of this guide.
阅读更多
136 个人发现此评论有用