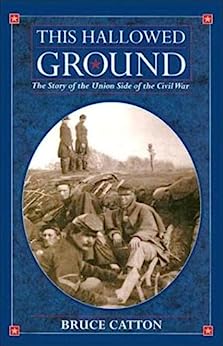 Covering events from the prelude of the conflict to the death of Lincoln, Catton blends a gripping narrative with deep, yet unassuming, scholarship to bring the war alive on the page in an almost novelistic way. It is this gift for narrative that led contemporary critics to compare this book to War and Peace, and call it a “modern Iliad.” Now over fifty years old, This Hallowed Ground remains one of the best-loved and admired general Civil War books: a perfect introduction to readers beginning their exploration of the conflict, as well as a thrilling analysis and reimagining of its events for experienced students of the war.

hog
5.0 颗星，最多 5 颗星 Marvelous Catton, As Expected
2018年1月12日 - 已在美国亚马逊上发表
已确认购买
As a young person, I had both of the two three-volume Civil War treatises by Bruce Catton. I read them many times and wish I still had them. This single volume, This Hallowed Ground, is easy to read, is succinct, and yet is comprehensive in its scope. Catton gives the reader a close look into the attitudes, opinions, thoughts, and feelings of the soldiers and the civil populous of the Civil War era. He does this through annotated quotes and citations, but without losing the readability of the story. It is a wonderful read for anyone with an interest in the American Civil War.
阅读更多
8 个人发现此评论有用

Glenn A Roberts
5.0 颗星，最多 5 颗星 Catton is still the best
2015年7月10日 - 已在美国亚马逊上发表
已确认购买
Despite being nearly 60 years old, this is still one of the best popular histories of the Civil War available. In great part, that's due to the timeless, masterful writing style of Bruce Catton. His use of language to paint a picture or evoke an intellectual and emotional response from the reader is unmatched (though Shelby Foote and James McPherson come remarkably close.) This book describes battles, but if you're looking for battle-action reports detailing the movements of the Iron Brigade or Stonewall Brigade, or the heroic stand of the 20th Maine at Little Round Top, you won't find them here. Instead, Catton puts the battles into the perspective of an entire campaign, and discusses not only the campaigns, but the social, political and economic environments in which they occurred. As a result, many decisions that, by themselves, appear ill-considered are suddenly understandable when placed in the overall context of the conflict. I have always been a particular fan of Catton's way of describing how slavery is inextricably woven into the fabric of the war: it may not have been the direct, overt, stand-alone cause of the war, but it was at the root of all the other causes: preserving a way of life that at its root was stained with immorality; states rights (in the South Carolina declaration of secession, they gave as a justification New York's exercise of state's rights when it refused to enforce the fugitive slave act - South Carolina felt the federal government should force the state to enforce it), and the collision of the agrarian economy with the industrial economy. He then links this complex national tragedy into the civil rights struggles of the 1950's and 1960's; since the book was written in the midst of these struggles, their outcome was not yet certain - and, as he explains, may not be certain for several more generations. He succeeds, as no other writer on the Civil War has, in lifting the story of the conflict from something consigned to the dusty halls of history, into a living, breathing part of the modern American experience.

Western Backpacker
3.0 颗星，最多 5 颗星 Hallowed Ground
2021年9月23日 - 已在美国亚马逊上发表
已确认购买
It is a light review and skip through the Civil War from a Union perspective. I was especially disappointed by the reader that continually mispronounced words such as Chattanooga, Shiloh, and Winchester amongst others. Since I was knowledgeable of the battle, I eventually figured out which one he was portraying.
阅读更多

Rand Whitney
5.0 颗星，最多 5 颗星 This is a grand summary of the battle of Gettysburg ...
2015年3月30日 - 已在美国亚马逊上发表
已确认购买
This is a grand summary of the battle of Gettysburg! I have read much on Gettysburg yet got so many new facts and insights to this epic event. I had it on my bucket list to stand on Little Round Top and imagine what the men there faced. Now that has been superseded by the desire to see another spot, just as dramatic yet more tragic - the place where the 262 men of the 1st Minnesota charged into 1500 Confederates threatening to break the union line thus saving the day and probably the battle. I now understand how haphazard war/combat was/is. Very sobering account - well written, concise, informative, inspiring. You can knock it out in a short 2 evenings reading.
阅读更多
5 个人发现此评论有用