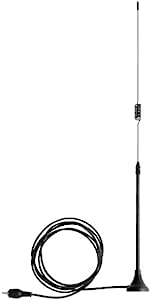 John D. Hanig
5.0 颗星，最多 5 颗星 This really worked well for me! FM and Wx bands.
2019年1月31日 - 已在美国亚马逊上发表
已确认购买
After reading the reviews, I was a little reluctant to order this antenna, since they were all over the scale. There just didn't seem to be a consensus whether this antenna was effective or not.

I needed improvement in two areas: FM and the weather band. There was a weak FM station that played classical music in the city about 20 miles south of here. The reception I got from the Sangean weather radio's extendable antenna was marginal. I added the antenna yesterday and now I have a solid, static free signal. Weather band is noticeably cleaner as well. I am highly satisfied.

JoelD
4.0 颗星，最多 5 颗星 Greatly improved reception.
2018年2月3日 - 已在美国亚马逊上发表
已确认购买
I live on the west side of Norman Oklahoma and should have great weather radio reception. I use a Midland WR400 weather radio. However the NOAA people have been adjusting transmitters and my signal dropped off greatly. This is the second Sangean ANT-100 I've owned. As long as it holds together, it is a great antenna and nearly doubled my received signal strength. However, as I said, this is the second of these antennas that I've owned. The first lasted only a couple of months and came apart. The wire connections and couplings should be treated as FRAGILE … just be careful where you place this. ALSO, the advertising is sketchy or deceptive. The cable length is NOT 12 ft as some of the reference material on the shopping page suggests. It is really closer to 5 or 6 feet. This is a magnetic antenna that works best with a metal ground plane. I used a steel gun lock box that is beside my bed and works perfectly as a solution.
阅读更多
10 个人发现此评论有用

Strathmont
1.0 颗星，最多 5 颗星 DON'T DO IT !!!!!
2014年4月17日 - 已在美国亚马逊上发表
已确认购买
I currently own TWO Sangean CL-100 Table-Top Weather Hazard Alert with AM/FM-RBDS Alarm Clock Radios. I live in Houston and the weather gets pretty bad. That being said, I'm about 30 miles away from the NOAA broadcasting station in Galveston, and the land is quite flat. The signal I was receiving was somewhat weak without an antenna so I purchased THREE of these. The second I plugged one in, I had absolutely NO SIGNAL. I then plugged it into my second radio, and again, NO SIGNAL. I tried all three antennas on both radios, and again, NO SIGNAL. Placement was irrelevant as I moved them to the highest floor, different rooms, took them outside, and regardless of the orientation of radios with these alleged "antennas," NO SIGNAL.

In my opinion, these antennas are literally worthless. If it were possible to give this antenna negative stars in the rating, I would.

Do NOT waste your money on this stick-on-a-cord. As a matter of fact, stop looking at these completely.

THEY DO NOT WORK - AND REMEMBER, I TESTED THREE OF THEM ON TWO DIFFERENT RADIOS.

WoodstockDan
2.0 颗星，最多 5 颗星 Broke within 2 weeks
2020年3月25日 - 已在美国亚马逊上发表
已确认购买
I tried to find warranty help on your website, but nothing exists. I concern since I own 5 of you Weather radios and a number of accessories.

The issue is the external antenna purchased via Amazon a month ago. I have one of the Sangean radios in our master bedroom but weather channel reception is poor. I added the external antenna to the same radio in the basement and works great. The issue is the antenna for the master bedroom, shortly after the antenna was installed the wire fell out of the base. I tried to glue it back in but reception is horrible. As we live in tornado alley, we rely on these radios alerting us in the event of danger.

I request a replacement antenna sent to address this issue.
阅读更多
3 个人发现此评论有用

Kodachrome man
5.0 颗星，最多 5 颗星 It does make a noticeable improvement
2020年10月17日 - 已在美国亚马逊上发表
已确认购买
I bought this primarily for a Midland weather radio with a collapsable built-in antenna. Our local weather station antenna is down for an extended time so having to reach out some. The radios antenna just barely works, this antenna brought the station in to a listening level, partly because I have flexibility in placing it. I can even put it outside thru a nearby window.

The biggest improvement so far has been FM. My weather radio can also play AM/FM and decided to experiment with a public radio station about 40 miles away I like as it plays jazz. However, most often it does not come in well on any radio I have. I tried the FM on the weather radio and doing the search function it went right on by using the built in antenna. I plugged this antenna in and tried the search and the station was found and came in clearly! I then switched to the weather radios antenna and got only static. In this FM test I placed the antenna right beside the radio, not outside the window. So for FM at least it is a vast improvement over the built in collapsable antenna.
阅读更多
1 个人发现此评论有用
加入亚马逊Prime，从此免运费
亚马逊Prime会员可享海外购美/英/日/德跨境免邮，全年无限次！更有免费无限次阅读电子书服务
> 立即加入
了解我们
合作信息
帮助中心和购物指南