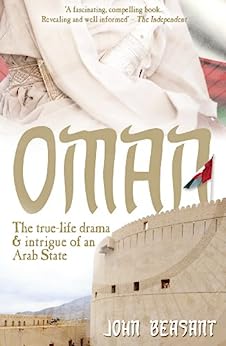 Oman: The True-Life Drama and Intrigue of an Arab State (English Edition) Kindle电子书

Oman is one of the world’s most secretive countries,ruled with absolute authority by the Sultan. All information is strictly controlled by the State: British Prime Minister Edward Heath once said that the story of the 1970 Palace Coup and the events that followed would ‘not be told in our lifetime’.

Following ten years’ residency in the country a senior member of Sultan Qaboos's Family suggested that John Beasant write a political history of Oman that would to some extent rehabilitate the maligned name of former Sultan Said, who was deposed in the 1970 Coup.

In 'Oman' Beasant catalogues a nature of exploitation woven through all manner of political and commercial interests and casts light on the dark practices so often involved in the sale of arms to Middle Eastern states and illustrates the political use to which the sale of ‘black gold’ - oil - can be put.

Oman is a parable of our times, detailing rivalry and intrigue between people in high places. It is one of the most dramatic tales in Arab history: a chronicle of personal price, rapacious greed and undiluted lust for power.

'One of the most enduring and compelling mysteries of the Second World War.' Mail on Sunday 'It reads like the plot of a thriller... strongly recommended.' Focus --此文字指其他 kindle_edition 版本。

John Beasant is a former press secretary to two Commonwealth Prime Ministers and a Head of State in the Islamic world. While writing Oman he was expelled from the Sultanate after rejecting a bribe not to proceed with publication. His previous works include The Santo Rebellion and Stalin's Silver and he is the writer of the planned Channel 4 series Orphans of Empire. --此文字指其他 kindle_edition 版本。

DEXTER COCHNAUER
4.0 颗星，最多 5 颗星 Oman is a good read.
2015年10月28日 - 已在美国亚马逊上发表
已确认购买
Oman is a country where very little is known. This was a very good book for learning about the history of Oman. It was very informative, as well as entertaining. Anyone who wants to begin the process of learning about Oman, this book will be a good start.
阅读更多
1 个人发现此评论有用

Julie Paterson
5.0 颗星，最多 5 颗星 Gripping, honest, revealing
2017年7月11日 - 已在美国亚马逊上发表
已确认购买
After a trip to Oman where so much history could not be revealed in either guidebooks or by locals, this book put it all into perspective for me. Great read and completes my journey to Oman
阅读更多