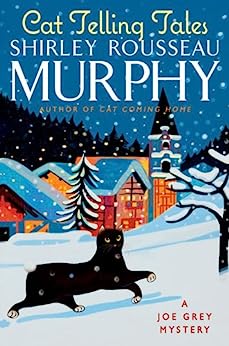 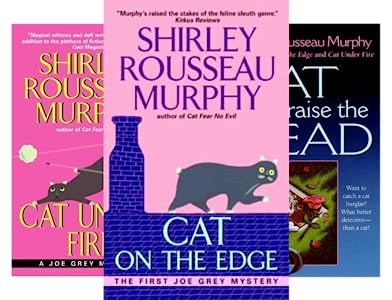 “The heartwrenching stories of an orphaned child and a stray cat at Christmas will tug on more than a few heartstrings.” (Romantic Times on Cat Coming Home)

“A heartwarming and satisfying tale.” (Booklist on Cat Coming Home)

“This is delightful entertainment. It would be a true cat-tastrophe if you let it pass you by.” (Todd David Schwartz, CBS Radio, Four Stars (Highest Rating) on Cat Coming Home) --此文字指其他 kindle_edition 版本。

Shirley Rousseau Murphy is the author of twenty mysteries in the Joe Grey series, for which she has won the Cat Writers’ Association Muse Medallion nine years running, and has received ten national Cat Writers’ Association Awards for best novel of the year. She is also a noted children’s book author, and has received five Council of Authors and Journalists Awards. She lives in Carmel, California, where she serves as full-time household help to two demanding feline ladies.

SpikeLover
5.0 颗星，最多 5 颗星 Secrets to the Grave
2019年11月28日 - 已在美国亚马逊上发表
已确认购买
An old woman, caring for her grandson as best she can, which is none too good, burns up in their shack of a house. His mother dead, his father unknown, he and his several cats are taken in by Max Harper. It is soon discovered that the fire was arsen. Around this same time, Debbie Kraft and her two daughters move in on Clyde, Ryan and Joe. She is an unwelcome guest, whining and lazy. Her oldet daughter torments Clyde's dog and is mean to her little sister. Debbie is the aunt of young Billy, but has no interest in him. Whrn hef daughtef Tessa's cat shows up, he tries to comfort thr sad four year old. He talks to her as she goes to sleep, being the one bright spot of her day.
But who killed Hesmerra and why? Where is Billy's father? And who are the two people Dulcie and Joe Grey find buried one atop the other in a shallow grave?
But all is not sorrowful. Dulcie has a happy secret, of the kind that can't remain a secret much longer!
阅读更多

R.R. Lexical
4.0 颗星，最多 5 颗星 Great bad mother character
2020年2月1日 - 已在美国亚马逊上发表
已确认购买
This engaging novel tells a tale of realestate fraud and murders in a California coastal town as the population of talking, sentient cats help the police chief and other humans in their wonderful feline way. The writing engages the reader with intelligent cats and a wonderful, nasty character, a derelict mother of two girls who has her own agenda. I enjoyed the company in this nicely constructed mystery. My only bump was getting used to the masculine names assigned to several female characters. If you don't pick up on this on first intro (and I did not), you will brought up short when it becomes clear that Ryan, Charlie, and Alain are in fact women. Good description and good pace earns a thumbs up for this talking-cats, cozy mystery.
阅读更多

AZ Ellen
5.0 颗星，最多 5 颗星 A novel approach to a mystery
2020年1月14日 - 已在美国亚马逊上发表
已确认购买
This book tells the mystery story from the perspective of the cats who solve it ... with some help from humans. It took me by surprise as this was the first book in the series that I read, even though this was volume 17 in the series. I loved it! And I will definitely be reading other books in this series. I loved the author's writing, her use of language and description. She seems to get inside the cat's head. We have had 1 to 3 cats living with us in the last 50 years, so this book was fun!
阅读更多

Sheila L. Beaumont
5.0 颗星，最多 5 颗星 A delightful whodunit with great characters, feline and human
2011年11月26日 - 已在美国亚马逊上发表
已确认购买
Another wonderful mystery featuring feline sleuths Joe Grey, Dulcie, and Kit. This whodunit involves the plight of cats left homeless after their owners abandon them as foreclosures follow the collapse of the housing bubble. Fortunately, caring humans in the seaside village of Molena Point, in Northern California, join together to care for the starving felines.

Meanwhile, an elderly alcoholic woman, Hesmerra, is found dead after her house catches fire, leaving her 12-year-old grandson, Billy, homeless. The story is soon complicated by the sudden appearance in town of Debbie, one of Hesmerra's daughters, with her two children, a real estate scam involving Debbie's ex-husband, three apparently missing persons, a lone homeless woman living in her car, a meth lab in an abandoned house, and the arrival from Oregon of a very clever tomcat named Pan.

Don't be concerned that this is an overly cozy tale of cutesy kitties. These talking felines are descended from ancient Celtic cats who have very special talents. They have human-level intelligence but are real cats who, despite being well-fed by their human housemates, have not lost the instinct for hunting rats and rabbits. "Cat Telling Tales" is a delightful whodunit, with a well-plotted story and a likable cast of regular characters, both feline and human. If you enjoy cat mysteries, and don't mind a little fantasy in your whodunits, don't miss out on this enchanting series.
阅读更多
25 个人发现此评论有用

bibliogrammie
5.0 颗星，最多 5 颗星 Wining Cats, Winning Author
2018年3月27日 - 已在美国亚马逊上发表
已确认购买
I found the first Joe Grey book and bought it with some misgivings. Talking cats? Gave it a try because I love cats but thinking it would be a disappointment as I couldn't conceive of being able to pull it off without making it a cartoon. I've been hooked since

Ms. Murphy knows cats. And she makes her books so natural you believe right along with her. Wonderful writer who paints word pictures that make you want to pack for Molena Point. And she carries you away into the mystery. Her characters are richly drawn. One of the kind of books you hope won't end. Thankfully she has written several. Start at the beginning and you'll be quickly hooked.
阅读更多
加入亚马逊Prime，从此免运费
亚马逊Prime会员可享海外购美/英/日/德跨境免邮，全年无限次！更有免费无限次阅读电子书服务
> 立即加入
了解我们
合作信息
帮助中心和购物指南