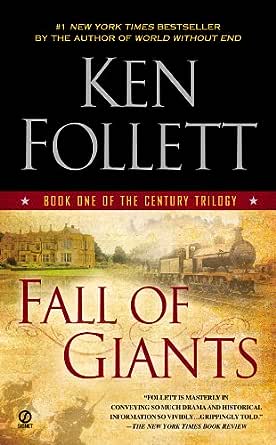 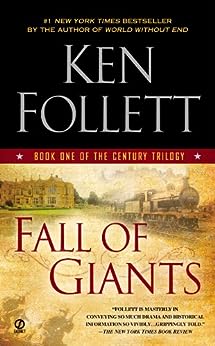 PART ONE - THE DARKENING SKY

PART TWO - THE WAR of GIANTS

CHAPTER THIRTY-ONE - May to September 1918

PART THREE - THE WORLD MADE NEW

CHAPTER THIRTY-SEVEN - May and June 1919

Excerpt from: The Edge of Eternity

PRAISE FOR THE NOVELS OF KEN FOLLETT

“Follett at his finest . . . [a] sweeping epic that will thrill his fans for hours on end.”


“Follett once again creates a world at once familiar and fantastic. . . . A guiltless pleasure, the book is impossible to put down. . . . Empires fall. Heroes rise. Love conquers. After going through a war with these characters, you’re left hoping that Follett gets moving with the next giant installment.”

'The master storyteller Ken Follett knits together British, American, German and Russian points of view from the start to the end of the First World War into a fascinating and remarkably fertile tapestry of society and politics' The Times 'Few works set out with such a grand concept as Ken Follett's new Century trilogy, but part one suggests that the series will be one of the literary masterpieces of our time . . . while grand events and themes are at the core of the novel, it is the richness of the characters and the intertwining of their often disparate stories that steal the show' Sunday Times 'He's pulled it off again with Fall of Giants: it's classic Follett with the brewing cataclysm of war given a human angle' Sunday Express 'Follett has managed to write an accessible and fascinating page turner that leaves the reader wanting more, at the same time as staying true to history' Sunday Business Post 'This is hi-octane storytelling all the more powerful because the story it tells is, mostly, true. Follett's command of the vast forces he unleashes is as impressive as the battle strategies of his generals, and in many cases more so . . . overall Follett is masterly in conveying so much drama and historical information so vividly' Scotsman 'An extraordinary achievement' A.N. Wilson, Reader's Digest 'Perhaps no British author better illustrates the forces at work in international publishing than can give birth to, and then grow, a global brand . . . If such books deliver the simple pleasures of escape, maybe they hold up a distant mirror to their readers too' Boyd Tonkin, Independent 'Like Follett's classic novel, Pillars of the Earth, it quickly becomes a guilty pleasure' Daily Telegraph 'An epic saga on a grand scale. Spiked with romance and intrigue . . . This involving historical saga is the perfect read for long winter evenings' Choice --此文字指其他 kindle_edition 版本。

Ken Follett is the author of numerous international bestsellers, including Jackdaws, Hornet Flight, Code to Zero, Triple, Eye of the Needle, Pillars of the Earth, and A Dangerous Fortune. He lives in England. --此文字指其他 kindle_edition 版本。
阅读更多