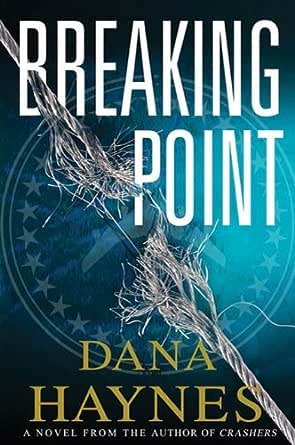 “The large cast of compelling characters, nonstop action , and realistic feel of the investigation make this novel a standout…A thrill ride.”—Associated Press

“Jaw-dropping…There is mystery, action, suspense, death, and romance from beginning to end.”—Bookreporter.com

DANA HAYNES, author of Crashers, was, for more than twenty years, a journalist and editor at several newspapers in Oregon. He now works for Portland Community College and lives in Portland, Oregon.
--此文字指其他 kindle_edition 版本。
阅读更多
click to open popover

A twin turboprop plane lifts off from Reagan National with an unusually light passenger load and crashes on the approach to a landing in Helena, Montana.
Three National Transportation Safety Board, NTSB, personnel, the Crashers,on their way to another crash investigation are aboard; two survive, one dies.
Dana Haynes builds an entangled plot from the incident, involving NTSB investigators, drug enforcement personnel from ATF, illegal arms merchants, agents from the FBI and CIA, a serial assassin, a local sheriff and police, and a mysterious weapon of 'mass disruption'.
The events and devices employed may be a stretch of imagination, but they work well with the characters and plot.
The dialogue is lively and entertaining, but the reader may need to keep a lineup of the many characters in order to follow the frequent shifts in the scenes.
The retrospective of events leading up to the crash works well with the plot, albeit a bit repetitious.

Cranky*Girl
2.0 颗星，最多 5 颗星 Disappointing hash
2012年10月21日 - 已在美国亚马逊上发表
已确认购买
I really enjoyed Crashers, so I bought this book, but found it extremely disappointing. It was a jumbled hash. The writing was choppy and seemed rushed, the constant scene shifts seemed written with TV plotting in mind, and the characters were not completely fleshed out. The author assumed you knew everyone from the first book, which was irritating, because it had been a year since I read Crashers. Both old and new characters were barely roughed in, and many were outlined only briefly before being killed off. Two of the characters seemed to have personality shifts that weren't supported by any development or explanation. To some degree the plot was a retread, but that's probably the peril of having a plane crash be the central theme. I thought Crashers was a great stand-alone book with a novel idea, but I don't think this concept works as a series.
阅读更多

Pat S. Zajac
3.0 颗星，最多 5 颗星 Too high a body count!
2015年4月1日 - 已在美国亚马逊上发表
已确认购买
Starts out great and then dissolves into messy flood/fire disaster. Bad enough innocent people were killed in crash, but investigators and law enforcement people drop like flies. The investigative part is interesting, and the villains are clever, but I lost interest in the floods and fires.
阅读更多

Mark McKenna
1.0 颗星，最多 5 颗星 Poor sequel
2017年5月17日 - 已在美国亚马逊上发表
已确认购买
If the author wanted to focus on Daria, then he could have done it better than this sequel. Those characters you cared about in the first book secondary characters or worse in this book.
阅读更多