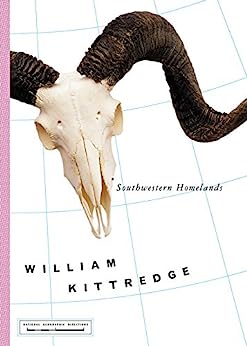 For part of each of the last twenty years, much-loved essayist and fiction writer William Kittredge has ventured to the storied desert landscape of the American Southwest and immersed himself in the region's wide-ranging wonders and idiosyncrasies. Here Kittredge brings all this experience to bear as he takes us on a rewarding tour of the territory that runs from Santa Fe to Yuma, and from the Grand Canyon on south through Phoenix and Tucson to Nogales. It is a region where urban sprawl abuts desert expanse, where Native American pueblos compete for space with agribusiness cotton plantations, and where semi-defunct mining towns slowly give way to new-age hippie gardening and crafts enclaves.

As part-time resident and full-time observer, William Kittredge acquaints us with one of the country's most vital and perpetually evolving regions. Populated with die-hard desert rats on the banks of the Colorado, theoretical physicists in Albuquerque, Hopi mothers and their daughters, and renegade punk-rock kids sleeping in the streets, Southwestern Homelands is a book as much about the legacies of a territory's colorful past as it is about the alternately exciting and daunting complexities of its immediate future.

William Kittredge has published fiction and essays in such magazines as The Atlantic Monthly, Harper's, Rolling Stone, Outside, TriQuarterly, North American Review, and Iowa Review. A graduate of the Iowa Writers' Workshop and a professor of creative writing at the University of Montana, Kittredge's works include Hole in the Sky: A Memoir, Owning it All: Essays, and the story collections The Van Gogh Fields and We Are Not in This Together. --此文字指其他 kindle_edition 版本。

John P. Jones III
4.0 颗星，最多 5 颗星 Wandering around the American Southwest…
2019年10月16日 - 已在美国亚马逊上发表
已确认购买
Thanks to a former fellow Amazon reviewer I was introduced to the “National Geographic Directions” series of travel books. Looking down the list, I placed most of them on my “fantasy list,” meaning if I live long enough. There are travel books by notable authors on Crete, Barcelona, Japan, Martinique and other places of interest. But I figured I should start on one where I have lived for the past 16 years: the American Southwest.

This is a collection of essays by William Kittredge, which was published in 2002. Kittredge is still with us, having been born in 1932. He is not precise on his dates, but seems to be an outlander to the Southwest, spending most of his life in Montana and eastern Oregon. He did have a teaching assignment for a brief period of time at Arizona State University. How quickly some observations can become dated, after a couple of decades; he bemoans the dominance of malls in our culture, rightly I thought (at the time), and now they are going the way of the dinosaurs.

Many of Kittredge’s observations, however, are truer today than then, and are my own “hobby horses”: overpopulation, of the world in general, and the Southwest in particular, pressing against the limited water resources. He did “draw me in,” in the second chapter. He is going to meet Doug Peacock, famous for his work with grizzlies at Glacier National Park. Peacock is also the author of “Walking It Off,” an excellent course of therapy for any trauma. (I reviewed his book in 2008, at Amazon). In Peacock’s case, he is a Vietnam War veteran, of the type that incurs the most trauma – he was a “true believer” in the cause, sometimes called gung-ho. He was a Green Beret medic when the light bulb finally lit, during his SECOND tour. Peacock was a good friend of the curmudgeon environmentalist, Edward Abbey. Peacock served as the model for George Washington Hayduke, in “The Monkey Wrench Gang.” Anyhow, Kittredge did “pal around” with them a bit, providing a nugget or two of insight.

Kittredge is well-read on the Southwest and briefly discusses the works of some twenty other authors. There are the “usual suspects”: Wallace Stegner; David Roberts (In search of the Old); Ruth Benedict (Patterns of Culture); William deBuys (River of Traps); and Robert Kaplan (Empire Wilderness). I’ve read all of these. However, Kittredge named an equal number that I had never heard of, and I have placed a couple on the “fantasy list,” with the works of Charles Bowden being near the top.

The author made a few fresh observations, and a couple unique ones. He devotes an entire chapter to a reasonable but familiar critique of the “city different,” Santa Fe. He reminded me of Kaplan’s thoughts about the barrios of south Tucson, and how the “Third World” is coming to us, even more true, twenty years on, as I look at the “Hoovervilles” popping up around Albuquerque. Felt that Kittredge spent a bit too much time in bars, and not enough under a tent. The natural world of the Southwest is relegated to a cameo appearance. Still, it was an informative read, and a good introduction to the series. 4-stars.

Kristel E. Bastian
4.0 颗星，最多 5 颗星 Enjoyable and informative journey
2011年12月5日 - 已在美国亚马逊上发表
已确认购买
This was my introduction to this National Geographic series of locale based books written by famous authors. I chose this one because it is from my region. I would recommend it, particularly if you do live in the southwestern region of the US. It was good, but I also really liked (maybe more), Oaxaca Journal from Oliver Sacks. Instead of writing about neurology as his readers have come to know him for, he wrote about his ferns in Mexico. Check that one out too.
阅读更多
1 个人发现此评论有用

Jack Straw
5.0 颗星，最多 5 颗星 A Wonderful And Important Book
2014年10月21日 - 已在美国亚马逊上发表
已确认购买
This is a keeper. I've always enjoyed reading anything by Kittredge and when I discovered his writings here on the southwest I was overjoyed and power-read through it in a day. I intend to re-read it at a more contemplative pace soon.

I live in north central Arizona and reading this was like having an old friend come to visit. I felt like I was showing him around my favorite part of the world and marveling at his impressions.

An unexpected bonus are the encounters with other authors/characters such as Edward Abbey, Doug Peacock, William Eastlake, and his observations on the works of Charles Bowden whom I think is one of the most neglected writers in the modern southwest.

I did not always agree with some of the author's conclusions and opinions but no matter......Kittredge at his best will challenge any readers point of view frequently. He will keep you on your toes.
阅读更多
1 个人发现此评论有用
加入亚马逊Prime，从此免运费
亚马逊Prime会员可享海外购美/英/日/德0门槛跨境免邮，更有会员专享折扣！
> 立即加入
了解我们
合作信息
帮助中心和购物指南