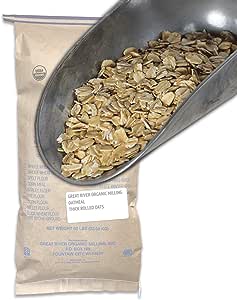 Great River Organic Milling is located on the upper Mississippi River, in the heart of what is called the Hiawatha Valley. The natural beauty of the area is a constant reminder of the importance of our commitment to organic agriculture. Organic, or sustainable agriculture is more than the avoidance of chemical fertilizers and pesticides. An organic farm strives to protect our environment by building and maintaining healthy soil which, in turn, improves water and air quality. It has been shown that grain and other food crops grown in a healthy soil, resist pests and diseases better than conventionally grown crops and also contain more vital nutrients important to humans. Consuming organic foods promotes the health of individuals and the land on which it was grown. In supporting organic agriculture we promote the cycle of a healthy environment which includes the lives of microorganisms, plants, and humans. Most Great River flour is stone-ground. We believe the natural granite millstones contribute to the quality, taste and nutritional integrity of whole grain flour. Grain flowing into the stones becomes very thin, flat flakes which integrates all parts of the wheat immediately into the flour, allowing the flour to have more flavor. The cooler temperatures that occur during milling with stones allows important enzyme activity to continue. Protein levels are also be maintained. Our stone-ground flours are milled to order, to retain the nutritional value of the flour. Great River is Certified Organic by Quality Assurance International and Kosher approved. Obtaining our certification requires a yearly inspection of our milling facility and records to insure that our products meet industry standards.

Robert
2.0 颗星，最多 5 颗星 Weigh before you Open!
2018年2月11日 - 已在美国亚马逊上发表
已确认购买
The product is very good, tasty oats. The problem I had with it, they shorted it by 4 pounds. The bag I received was 21 lbs, not the 25 they advertise. I don't know if anyone else has had this problem but it definitely is an issue when you are buying bulk and only get 80% of the product.
阅读更多
50 个人发现此评论有用

Karin
5.0 颗星，最多 5 颗星 Another excellent product from Great River
2017年9月23日 - 已在美国亚马逊上发表
已确认购买
Another excellent product from Great River. I really cannot believe I find myself singing the praises of a particular miller, but so far I have to say I've been extremely happy with their products. They only thing they don't seem to have, but this isn't generally found in the US, is the large, thick rolled oats that take 15 minutes to cook. Since these are steel cut, they do take longer to prepare than rolled oats. Also, for those of you seeking oats that are closer to raw, these are closer than rolled, however, oats do NOT store well raw once they are changed from their natural whole oat groat state, so this is to be expected. You can't eat oat seeds unless the husk is removed, and once the husk is removed, it won't last nearly as long as in the husk. Oat seed in the husk can remain viable for years, but once it's removed, only a few months. Oat groats treated with some steam last much longer and retain more nutrition than those that go rancid.
阅读更多
11 个人发现此评论有用

DMSChicago
1.0 颗星，最多 5 颗星 These are NOT quick oats
2018年7月28日 - 已在美国亚马逊上发表
已确认购买
This product is mislabeled on Amazon. While it say’s “quick” steel cut oats, the same claim is not made anywhere on the packaging, and upon receiving them, they don’t look the same as other “quick” steel cut oats that I have bought from other companies. In fact, when they were delivered, I went back online, because I immediately thought that I had made a mistake and bought the wrong item, but when I read again that it said “quick” steel cut oats, I decided that I would give them a try.

What I learned: If you are looking for “quick” steel cut oats, which are generally cut smaller, and work particularly well for overnight oats, these will not work. The pieces are cut too big and they do not absorb the liquid/soften enough overnight (or even 2 nights).
阅读更多
17 个人发现此评论有用

MomAWi
2.0 颗星，最多 5 颗星 Bugs
2017年8月23日 - 已在美国亚马逊上发表
已确认购买
Although I like the product, I agree with another poster that weevils are an issue. I also purchased wheat berries from this same company and had an infestation of something else. (Not sure what they were) I keep a lot of bulk grains sealed in 5 gallon buckets, but it is only this company that I have an issue with.
阅读更多
14 个人发现此评论有用
加入亚马逊Prime，从此免运费
亚马逊Prime会员可享海外购美/英/日/德跨境免邮，全年无限次！更有免费无限次阅读电子书服务
> 立即加入
了解我们
合作信息
帮助中心和购物指南