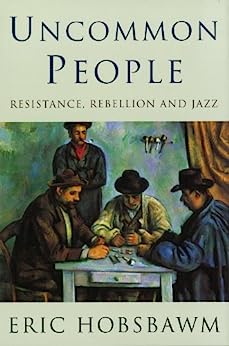 A fascinating collection of essays concerning working men and women.

These 26 essays range over the history of working men and women between the late 18th century and the present day. They include Hobsbawm's pioneering studies in labour history and social protest - the formation of the British working class, labour custom and traditions, the political radicalism of 19th century shoemakers, male and female images in revolutionary movements, the machine-breakers, revolution and sex, peasants and politics, the rules of violence, the common-sense of Tom Paine.

There are more recent reflections: on the May Day holiday; the Vietnam War; socialism and the avantgarde; Mario Puzo, the Mafia and the Sicilian bandit Salvatore Guiliano; and the cultural consequences of Christopher Columbus. There are tributes to some of jazz's legendary figures - Count Basie, Sidney Bechet and Dike Ellington - anf the tragic blues-singer Billie Holiday.

Quite billiant...because he assembles his arguments with knowledge ranging across both countries and centuries, they have a rare potency (Scotsman)

Demonstrating that it is possible to be both erudite and accessible, he turns his attention to the "uncommon people" of the 18th and 19th centuries... [Hobsbawm] provides a brilliant deconstruction of the popular idea that revolution and sexual freedom are intrinsically connected. (SUNDAY TIMES)

Dump-if you have any- your preconceptions about Marxist history and buy this book. (OBSERVER)

Born in Alexandria in 1917, Eric Hobsbawm was educated in Vienna, Berlin, London and Cambridge. A Fellow of the British Academy and the American Academy of Arts and Sciences, he taught for most of his career at Birkbeck College, University of London, where he was Emeritus Professor of Economic and Social History. He is best known for his trilogy of studies on the long 19th century (The Age of Revolution: Europe 1789-1848, The Age of Capital: 1848-1875 and The Age of Empire: 1875-1914). He died in London in October 2012 at the age of ninety-five. --此文字指其他 kindle_edition 版本。

Mikel Norwitz
3.0 颗星，最多 5 颗星 Much of interest though occasionally opaque
2022年6月5日 - 已在美国亚马逊上发表
A sampler of short essays by a noted historian, covering everything from European working-class history to articles on Jazz musicians. There is much of interest here, although a lot of the historical essays seem to be written for academics rather than the casual reader - there are a plethora of references to other events and texts outside of the present one which made the reading occasionally opaque.
阅读更多

Edward G. Nilges
5.0 颗星，最多 5 颗星 Victorian Values
2001年3月25日 - 已在美国亚马逊上发表
The best essay in this collection is "Victorian Values", on the skilled-worker labor movement of England's 19th century.
The superficial contemporary story is that British workers were lazy and bloody-minded sods who built into British industry a variety of rules which they insisted upon while their country failed in the 1970s to compete.
There is some truth in this very shallow story, for by the late 1970s, it was true that many English workers had been driven crazy by the matching bloody-mindedness of the toffs in charge and their matching lack of imagination. One of Meg Thatcher's unsung accomplishments happens to be giving some of the most egregious examples of the upper class the boot.
But the real story is here, in Hobsbawm's essay Victorian Values.
Skilled men in Britain in the 19th century were justly proud of their status. They after all bent metal and other recalcitrant materials (in ways we no longer teach the young, allowing computers to do the job) and formed the railways which at first frightened the toffs (the Duke of Wellington himself was astonished that a thing could go so fast) and which the upper crust then took for granted.
Their "Victorian Values" weren't, on Hobsbawm's account, bloody-mindedness. They were part of being sober or teetotal, industrious, church-going and caring for their families.
That is: the man who thought it a natural law that he should have some of his employer's time, at the close of business, to properly care for his own tools was a man who could ask justly for this time because he also went to church and took care of his family.
Contrast the post-modern scene. Employers today refuse to get lured into time-consuming debate about natural justice, whether with unions or piecemeal.
Modern corporations, by encouraging personal experimentation, have liberated a lot of people, but Hobsbawm shows that perhaps conservatives are being disingenuous when they call upon working people to settle down, and return to Victorian Values.
For if a man returns to the moral law the 8 hour day may again be seen to be natural, and many other work rules which are said to hamper the overarching command to be "productive."
阅读更多
4 个人发现此评论有用