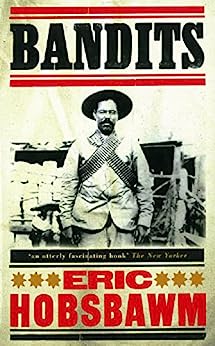 A trailblazing study of the social bandit or rebel

BANDITS is a study of the social bandit or bandit-rebel - robbers and outlaws who are not regarded by public opinion as simple criminals, but rather as champions of social justice, as avengers or as primitive resistance fighters. Whether Balkan haiduks, Indian dacoits or Brazilian congaceiros, their spectacular exploits have been celebrated and preserved in story and myth. Some are only know to their fellow countrymen; others such as Rob Roy, Robin Hood and Jesse James are famous throughout the world. First published in 1969, BANDITS inspired a new field of historical study: bandit history.

"A wise as well as exciting book; a very valuable addition to the history of mentalities and to that of popular protest... This is human history at its very best."
—THE TIMES LITERARY SUPPLEMENT [London]

"A dazzling historical squib, fizzing with ideas and strange stories."
—THE GUARDIAN

"In an age of narrow specialists, Eric Hobsbawm remains the supreme generalist... For sheer intelligence he has no superior in the historical profession."
—SIR KEITH THOMAS
--此文字指 paperback 版本。

Eric Hobsbawm taught until retirement at Birkbeck College, University of London, and since then at the New School for Social Research in New York. --此文字指 paperback 版本。

Manuel Medina
5.0 颗星，最多 5 颗星 Go ahead and buy it
2014年6月30日 - 已在美国亚马逊上发表
已确认购买
This book is the continuation of Primitve Rebels, where the Social Bandit is listed as one of those Primitive Rebels, this book is great for understanding the social interactions behind Bandits, how communities provide cover, how they are seen as local heroes and national foes, etc. If you are interested in conflict, criminology, revolutions, and related this has to be in your book shelf.
阅读更多
3 个人发现此评论有用

M. Moneta
4.0 颗星，最多 5 颗星 Bandits or reformers
2013年10月21日 - 已在美国亚马逊上发表
已确认购买
A most fascinating subject, explored and explained by one of the world's leading historians. Were they common crooks, or sicual reformers looking for justice? Why did they flourish in some lands and not in others?
阅读更多
1 个人发现此评论有用