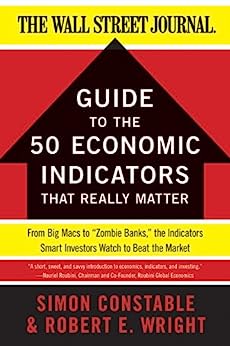 Simon Constable is host of the News Hub, a live web show that airs weekdays on Wall Street Journal Online. He makes standalone videos for WSJ.com, MarketWatch, and Barrons.com. He lives in New York City.

Stella Carrier
5.0 颗星，最多 5 颗星 Unconventional and Conventional Signs
2020年6月26日 - 已在美国亚马逊上发表
已确认购买
I confess that I already rationally knew that I was very much outside the ballpark intended audience for this kindlebook titled Guide To The 50 Economic Indicators That Really Matter by Simon Constable & Robert E. Wright (Wall Street Journal Guides)when I purchased it via Amazon. However, I am still glad to have followed my creative intuition to purchase this kindlebook because of the multiple areas referenced on multiple economic indicators: chain stores-the authors explain because they operate across the U.S. more than just regionally, the authors go on to explain that chain stores employ master sellers who use the latest selling techniques and apparently hire some of the savviest marketers, chapter 4 existing home sales are covered, the authors explain that existing home sales matter because they are a part of people’s wealth and what happens in the housing market has an impact on the psychology and spending patterns of the nation, the authors mention the connection between economists and money managers pertaining to the National Association of Realtors (NAR), chapter 5 the level of employment and the percentage of people with full-time employment, some of the factors relating to what is considered the Big Mac Index, birthrates, might be far from politically correct for some however the authors explain candidly what is considered the “Vixen Index” even as a reader cultivating my creativity, self confidence and intuition and who has viewed some articles pertaining to transforming ageism into multiple beneficial opportunities I actually found the explanation of the “Vixen Index” informative. The “Vixen Index” is going to be obvious to some readers already viewing this review, however my creative instinctive nature is indirectly influencing me to avoid disclosing further details for those who have yet to look up the Vixen Index with through this kindlebook Guide To The 50 Economic Indicators That Really Matter by Simon Constable & Robert E Wright andor online
阅读更多
8 个人发现此评论有用

Hal Jordan
4.0 颗星，最多 5 颗星 Witty tour of key (and not so key) economic indicators
2011年5月13日 - 已在美国亚马逊上发表
已确认购买
You know you are dealing with a book that's overstating its value just a tad when you see this in the introduction: "... we'll show you how the indicators we've chosen can help you see the turns in the economy before they happen. With that prescience you can make changes to your investments ahead of time and avoid the suffering you probably felt during the past couple of years." Now anyone who could actually predict the "turns in the economy" using these indicators -- or any others -- would be reclining on his yacht moored off the south of France, and would be unlikely to divulge his secrets in a mass market paperback. That said, this book is an entertaining read and can serve as a useful reference to anyone who follows the markets or the broader economy.

Simon Constable writes for the Wall Street Journal and hosts their afternoon "NewsHub" recap of the markets. Anyone who follows the NewHub will be familiar with his witty -- actually, kind of snarky -- commentary. He's sort of the Simon Cowell of the Wall Street crowd. His distinctive voice is evident in this book. His co-author, Robert Wright, has written extensively on business history and used to be associated with the Stern School at NYU and the Museum of Financial History in Manhattan's financial district, although he apparently now teaches at a college in South Dakota.

The book consists of 50 short chapters devoted to the indicators. Each chapter has a brief description of the indicator -- usually accompanied by a quote from an investment analysts on the indicator's importance -- a time series graph of the indicator, and a discussion of possible investment opportunities that might occur when the indicator is unusually high or low. Each chapter ends with an "Executive Summary" box that explains when data on the indicator are released, where to go to find the data, what to watch for, and so on. To anyone who follows the financial news even casually, many of the indicators will be familiar, such as automobile sales, durable goods orders, or M2. To most people, though, other indicators are likely to be less familiar, such as book-to-bill ratio, the Baltic dry index, and the Tankan survey. I'm a little skeptical about how useful some of the more obscure indicators will be to the average investor, but they make for interesting reading. The final (tongue-in-cheek) indicator, the "Vixen index," measures how attractive the waitresses are in your local restaurant. The more attractive the waitresses, the worse the labor market, because in a strong labor market these attractive women would be working at better jobs elsewhere.

All-in-all, leaving aside the somewhat overstated claims the authors make for investment strategies based on these indicators, this is a valuable little reference tool and should be, at the very least, a fun read for most personal investors.

Songman55
5.0 颗星，最多 5 颗星 A good reference for the information that goes into the stats the government and others release
2016年1月10日 - 已在美国亚马逊上发表
已确认购买
Excellent tool to learn about the stats that drive the markets. What I did not learn is how the big money uses some of these stats to justify why the market was up or down. The "where have you been the jobs number was negative" as stated by Bloomberg/ CNBC pundits and others .Then two weeks later the market rallies and the jobs number is all but forgotten. Those of us in the business know that unemployment is higher than the jobless numbers indicate or the CPI quote is bogus, yet it is the playbook all follow so we must play the game also. This book is a good reference tool!
阅读更多
8 个人发现此评论有用

Bennie Linnin
5.0 颗星，最多 5 颗星 Pivotal Data
2022年6月15日 - 已在美国亚马逊上发表
已确认购买
This information pinpoints reports that can help you make valuable investments. It tells you why the reports are valuable, when they come out, etc.
阅读更多

K. Low
5.0 颗星，最多 5 颗星 Economic Indicators
2018年6月23日 - 已在美国亚马逊上发表
已确认购买
Very good book about economic indicators. It give you a lot of factors to look for on 'where the stock market is going'.
阅读更多
7 个人发现此评论有用