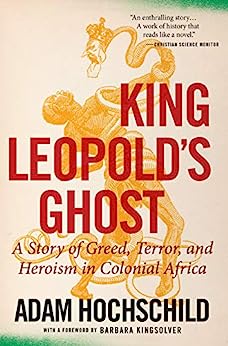 In the late nineteenth century, as the European powers were carving up Africa, King Leopold II of Belgium carried out a brutal plundering of the territory surrounding the Congo River. Ultimately slashing the area’s population by ten million, he still managed to shrewdly cultivate his reputation as a great humanitarian. A tale far richer than any novelist could invent, King Leopold’s Ghost is the horrifying account of a megalomaniac of monstrous proportions. It is also the deeply moving portrait of those who defied Leopold: African rebel leaders who fought against hopeless odds and a brave handful of missionaries, travelers, and young idealists who went to Africa for work or adventure but unexpectedly found themselves witnesses to a holocaust and participants in the twentieth century’s first great human rights movement.

Staz
5.0 颗星，最多 5 颗星 Outstanding- Couldn't Put it Down
2017年5月11日 - 已在美国亚马逊上发表
已确认购买
I bought this book on a whim while on vacation because it was a Kindle Daily Deal, and wound up finishing it in just three days. I have no real background in Africa, Belgium, or colonialism, but Hochschild does a phenomenal job of weaving together a compelling story that brings a forgotten and disgraceful era to life.

The story is just incredible. Chronologically, Hochschild does a great job at tying together a complex story over decades and even centuries, beginning with tale of the European discovery of the Congo river and then honing in on Leopold's obsession with colonial expansion and the Congo specifically. He describes the casual brutality of Leopold's regime extremely effectively before skillfully introducing the figures in the movement that rose up to make the world aware of what was happening in Africa. Along the way, the author does a great job of putting the events into historical context and addressing likely counterarguments made be pro-Leopold sources (e.g. why there was outrage about the Congo specifically despite equally brutal colonial regimes elsewhere in Africa, the pre-existence of continental African slavery, etc). Hochschild does a great job of developing characters and presents a mountain of irrefutable evidence to back up his main arguments, all of which is done in an extremely engaging manner. The author's epilogue, written 10 years after the initial publication, is also even handed and insightful.

If I have any complaint with the book, it's that the author sometimes makes leaps of judgement in the narrative that aren't necessary, especially when it comes to speculating whether certain characters in the story previously l crossed paths or allowed specific people/events to privately influence their decisions. The story is compelling enough without these speculations. He also (rightfully) demonizes Leopold and other figures in the regime, but spends less time characterizing anti-colonial figures whose backgrounds and personal lives are shady at best. While certain players are demonstrably more despicable than others, I felt that Hochschild could have been a little more even handed in describing the faults of his protagonists at times, if for nothing else than to appear more impartial as a narrator and derail his critics.

Overall, the book is outstanding and I would recommend it to anybody looking for a fast paced story, context about the European scramble for Africa, or insight as to how Africa developed through the 20th century.

Kevin K kamisendu
5.0 颗星，最多 5 颗星 This book changed my life
2017年2月15日 - 已在美国亚马逊上发表
So I don't usually do leave reviews of books but I had to this time. I bought this books about 8 months ago but I read the last few weeks only and I think it was the perfect timing with what is going on in my life right now as I'm making big choices concerning my future right now. If I didn't read this book right I probably would have missed on what might just be my life goal and something I plan on focusing for a good part of my life once I get more ready for it. I know this is not much of a book review as of now but I just wanted to show how much the story of my people have affected me and how I really want to do something about all the suffering that have been going on and keeps on happening now. I myself grew up in Kinshasa, my dad was an army colonel who fought against Mobutu in the 90's and had to flee the country for a few years because of that. This year (2017) I'm about to be 18 and I’m surprised that it's only now that I get to know the story of my people and what that so-called King Léopold II have done. Throughout my read I came to decide that one day I want to be a change in my country’s history too, a positive change, I want to be the African voice to change the Congo and make it one of the great countries. I know I sound a little too excited now and kind of dreaming but I'm still a kid so I guess it's okay right? One day hopefully once I do start making a change someone finds this review and call me out on it.
阅读更多
338 个人发现此评论有用