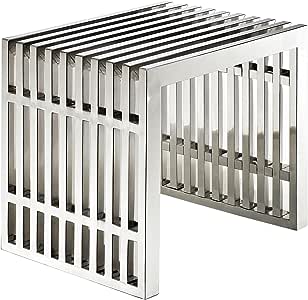 C.M.M.
5.0 颗星，最多 5 颗星 Beautiful Console Table
2016年4月9日 - 已在美国亚马逊上发表
已确认购买
No, this is not the $2,000 plus brushed chrome version, but a polished stainless steel version instead. Yes, it is still a substantial, modern and stylish console table and more than worth the bargain price I paid for it. Unseen are the levelers on the bottom of the piece to accommodate uneven flooring if needed. I plan on placing a full length mirror on top if I ever want to use it for serving drinks or appetizers. Even my dog likes it!

The console table came well packaged and took me about 1/2 hour to unpack and cut up the box for recycling. The table arrived earlier than expected and undamaged. I am a very happy camper.
阅读更多

mc
1.0 颗星，最多 5 颗星 Poor Quality
2018年12月18日 - 已在美国亚马逊上发表
已确认购买
Product:
I really wanted to like these benches. they had the right look and feel I was looking to add to our kitchen nook. So disappointed at what was delivered. I ordered two benches, and both I had troubling experiences. One was cracked across three pieces of wood, and the manufacturer/seller is not willing to issue replacement parts. The other one had rotted/molded wood across half of the benches surface. I'm surprised they even dared shipped this second item out because the mold had spread through the box onto the outer surface. It was so obvious from outside the box that it had mold that I refused to accept this into the house. The whole time we had it I was in fear that mold spores would spread into the house. I ended up having to replace the box to ensure my family's safety, and because UPS wouldn't accept it for shipment because of the condition it was in.

Return:
This product took forever to return. They never sent out a person to pick up the package, they expected me to drop it off at UPS. These items are not small, I own a typical size sedan, and there's no change to get one into the back, even if I drop the backseats into the trunk. It took several weeks for me to get someone scheduled to pick this up from our house directly. Ugh.. such a nightmare.

Also One of packages was so moldy that I had to rewrap the product to ensure it was fully covered and prepared for shipment. Also, didn't want any mold spores to circulate through our house, so we rewrapped it and secure the box in shrink wrap to ensure no one breathed in harmful mold.
阅读更多
10 个人发现此评论有用

Razberriez
5.0 颗星，最多 5 颗星 Excellent Quality...substantial in weight--- A+++
2016年11月3日 - 已在美国亚马逊上发表
已确认购买
Have this bench and I knew I couldn't go wrong with the console table... perfect size and quality was top notch!
阅读更多

Amazon Customer
4.0 颗星，最多 5 颗星 Modern Table, Fast Shipping, Mid-Price Point
2017年7月13日 - 已在美国亚马逊上发表
已确认购买
Just received the Stainless Steel Console Table. I am very pleased with my purchase! This is the same table that you will see on "other sites" but cheaper AND you can received the table much faster. I did take off 1 star due to the height of the table (only 29 inches). My dog is called than the table...

Also want to point out that there is NO glass top on the table, so you have to be careful about how you chose to decorate table as items might fall through slats.
阅读更多

A.R.
5.0 颗星，最多 5 颗星 Clean, sharp lines. A true centerpiece.
2018年6月20日 - 已在美国亚马逊上发表
已确认购买
I recently watched the movie Game Night, and there's a scene in which the gridiron desk appears, and it was so unique that I went online looking for it. I was already shopping for a new coffee table, and what do you know, they make one of them, too. Had to have it, and bought it immediately. The glass top arrived first, in a separate box, with holes in the corners, and not much padding inside at all. Fortunately, it was perfectly fine. The table base showed up today, and while I've read several reviews on here about damaged or crooked bars/slats, dents, scratches, I was fortunate enough to be lucky to have received everything in great condition. I will say, the packaging could be MUCH better, it's definitely not as fortified as one would expect for a $600 coffee table, considering pieces from most other "cheaper" funiture manufacturers pad the hell out of their boxes, but, I'm grateful that it arrived pristine.

The table itself, is simply amazing. Definitely cool looking, and not something you see regularly, even in high end furniture stores. It looks like something straight out of a 5 star hotel lobby. Very sharp, and exactly what I wanted.
阅读更多
6 个人发现此评论有用
加入亚马逊Prime，从此免运费
亚马逊Prime会员可享海外购美/英/日/德跨境免邮，全年无限次！更有免费无限次阅读电子书服务
> 立即加入
了解我们
合作信息
帮助中心和购物指南