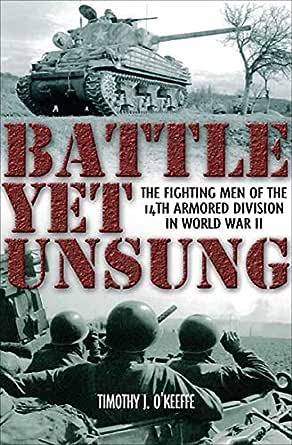 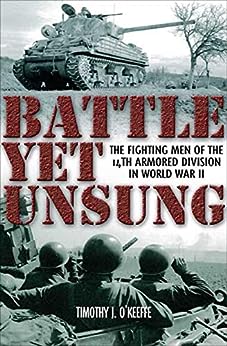 john s.
5.0 颗星，最多 5 颗星 Could not stop reading!
2020年8月20日 - 已在美国亚马逊上发表
已确认购买
Well-written and researched! My father was a medical officer in the 14th Armored Division and now I know why he never talked too much about his experience. Horrible injuries and death. Unbelievable the research that went in to this book. The persistence of the allies and the desperation of the Nazis toward the end of the war. Hitler enlisting children as young as 12 to fight as the allies continued to advance despite heavy opposition.
阅读更多

An uncle, who passed away recently, went ashore with the 14th, commanding a recon squadron. He was involved in the defense of the German civilians in Bavaria and came to know one in particular, whose name could not be mentioned. Two decades later, as a Col. at Redstone Arsenal he came to know Dr. Werner von Braun. von B recognized him as the 1LT in charge of the guard detail, and they became fast friends.

Gary E. Binder
4.0 颗星，最多 5 颗星 An overdue history
2011年3月3日 - 已在美国亚马逊上发表
已确认购买
The US Seventh Army came ashore in Southern France in August 1944. Due to personality conflicts with Eisenhower's headquarters it was treated as a "junior partner" in the operations in Europe. As a result there are fewer histories printed about the Seventh Army and its battles. The US 14th Armored Division joined the Seventh Army in the fall of 1944 and became its longest serving armored outfit. Finally a book has been printed giving the history of the 14th Armored Division. While not perfect, this book certainly helps fill a big gap. O'Keefe provides a look at an armored division in combat. The main focus is on the men, including many veterans' accounts. If there is any disappointment it is in the writing style. THe author will occasionally skip around during events and present side comments that detract from easy reading. As an example, a story about Operation Northwind in January 1944 will suddenly include references to the crossing of the Rhine River that occurred three months later! This can lead to confusion if the reader is not familiar with the "rythm" of events in WW2 Europe. As a person who is interested in the equipment and organization of the unit, I also became apparent that the author is very familiar with the human story but has only a minimal grasp of the machines used in armored combat in WW2. Unfortunately the machines are almost as much a part of an armored division's story as are the people - the unit existed to conduct mechanized combat. Definely a book worth having, as nothing else is readily available abou this famous unit. The stories are fascinating. I would rate it "8" on a 10-point scale.
阅读更多
7 个人发现此评论有用