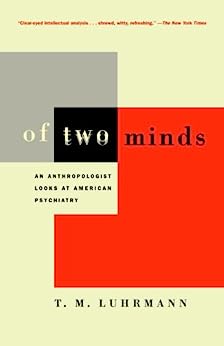 英语版本 T.M. Luhrmann (作者) 格式: Kindle电子书
|
分享
分享 <分享样章>
广告
显示所有 格式和版本 隐藏其他格式和版本
In this groundbreaking book, Tanya Luhrmann -- among the most admired of young American anthropologists -- brings her acute intelligence and her sophisticated powers of observation to bear on the world of psychiatry. On the basis of extensive interviews with patients and doctors, as well as day-to-day investigative fieldwork in residency programs, private psychiatric hospitals, and state hospitals, Luhrmann shows us how psychiatrists are trained, how they develop their particular way of seeing and listening to their patients, what makes a psychiatrist successful, and how the enormous ambiguities in the field affect its practitioners and patients.

How do psychiatrists learn to do what they do? What is it like for psychiatrists to deal with people who are in emotional extremity? How does the choice between drug therapy and talk therapy, each of which requires very different skills, affect the way psychiatrists understand their patients?  Boldly and with sharp insight, Luhrmann takes the reader into the world of young doctors in training.

At a time when mood-altering drugs have revolutionized the treatment of the mentally ill and HMOs are forcing caregivers to take the pharmacological route, Luhrmann places us at the heart of the struggle -- do we treat people's brains or their minds? -- and allows us to see exactly what is at stake.
阅读更多
›  查看更多商品促销信息

?[A]stute and fascinating.... [V]ividly portrays the fierce and often unnecessary wars between those representing the interests of the mind and the brain.??Kay Redfield Jamison

?A more nuanced treatment of the moral and philosophical issues than any previous discussion??
The New Yorker -- Review --此文字指其他 kindle_edition 版本。

T.M. Luhrman is a professor in the Committee on Human Thought at the University of Chicago, and the author of two previous books. She lives in Solana Beach, Califiornia. --此文字指其他 kindle_edition 版本。

critical consumer
4.0 颗星，最多 5 颗星 ethongraphy of american psychiatry, but the anthropologist goes native
2013年11月26日 - 已在美国亚马逊上发表
已确认购买
I am a psychiatry resident in the US but I am British and read this book prior to starting my psychiatric training. In this ethnography of American Psychiatry in the 1990s, anthropologist T.M. Lurhmann explores the tensions between psychodynamic and biomedical approaches to psychiatry during a time of tremendous change in the practice of psychiatry, largely under the growing influence of managed care. She essentially followed psychiatric residents, interviewed psychiatric researchers, psychoanalysts, patients, psychiatric survivors, attended conferences, had her own psychotherapy, and trained to provide psychotherapy in order to illuminate the process of becoming a psychiatrist. And she does a fantastic job. She really captures the joys, frustrations, fears, anger, regret, and insecurities of psychiatrists in training and more senior psychiatrists, and the curious melding of psychopharmacological and biological approaches to mental distress with psychodynamic (psychoanalytic) approaches which were taught side-by-side.

Lurhmann confesses her own father was a psychiatrist, and this text does not descend into an impassioned critique of the failures of psychiatry. She really gives a balanced account of the successes and limits to both biological and psychodynamic approaches to psychopathology, and concludes that psychiatry can be neither mindless nor brainless and must combine both approaches. This, unfortunately, is a rather dull conclusion, and I am not convinced it is true either. She portrays her subject matter with such sympathy, one wonders whether she has "gone native" and lost her objective, critical anthropological eye in the process. More recently (and not discussed at all in this text) Lurhmann has come to realize that what was missing from American Psychiatry was a focus on the social world in which people become mentally ill in the first place, experience stigma and discrimination, seek care, and recover or fail to recover. Also whilst in the 1990s psychodynamic therapy was the predominant psychotherapeutic approach taught in psychiatric training programs, it is/was by no means the only psychological approach that was taught: cognitive and behavioral therapies were also taught to some extent (and this is much more the case today), but this is not discussed at all. She also appears to uncritically accept many of the overzealous claims regarding the status of knowledge about the biological basis of mental illness trotted out at that time. As such, her main criticisms seem to be directed against the managed care companies that placed cost containment above patient care.

Although it was true that the rise of managed care did contribute to the demise of the therapeutic relationship, and they are/were often merciless in their refusal to provide more than very limited inpatient and outpatient psychiatric treatment, this appears to side-step the larger questions about the fundamental deficiencies in American Psychiatry at the time (which are still true today): the failure to educate psychiatrists in training and for psychiatrists to concern themselves with the wide social forces that impact mental health, and the lack of an overarching theoretical footing for this supposed science of morbid mental life.

Lurhmann concludes that we need both biological and psychodynamic approaches combined, as neither alone is sufficient. I remain to be convinced that the combination of these perspectives in any better than either one alone however.
阅读更多
11 个人发现此评论有用

reader
5.0 颗星，最多 5 颗星 Excellent insights
2018年3月7日 - 已在美国亚马逊上发表
已确认购买
This is an in-depth survey of the mental health system from a unique point of view. Since it was published, the situation has only devolved, but it contained many valuable insights. It is written with knowledge and compassion. I wrote to the author to thank her and to inquire as to why Jungian analysis wasn't included along with that of Freud, and she replied that it wasn't being done in the venues she studied ("to their detriment"). This is like no other book I have read on the subject, and is interesting even if you are not a consumer or practitioner.
阅读更多
1 个人发现此评论有用

Richard Lenon
5.0 颗星，最多 5 颗星 Anthropological account of medical training, psychiatry in particular.
2016年7月16日 - 已在美国亚马逊上发表
已确认购买
An anthropologist's accounting of what happens to physicians during training, most especially to psychiatrists. My wife completed psychiatry training at Stanford in 1978, and I finished my oncology fellowship that same year. We both learned things about what happened to us. Excellent recounting of what has happened in psychiatry over the last 50 years.
阅读更多
1 个人发现此评论有用

S. Rosenfeld
5.0 颗星，最多 5 颗星 A unique perspective
2016年8月5日 - 已在美国亚马逊上发表
已确认购买
An unusual and informative analysis of psychiatry, not to mention quite readable. Writing like an "embedded" journalist, an outsider living on the front lines of day to day hazardous duty, T.M. Luhrmann writes with a sympathetic voice, but always showing us all sides of the complex world of mental health treatment.
阅读更多

Richard A. Jenkins
2.0 颗星，最多 5 颗星 A major disappointment
2002年1月29日 - 已在美国亚马逊上发表
已确认购买
I read this book based on the glowing reviews it had received. It seemed to promise to be an outsider critique of psychiatry in the same lague as such classics as "Asylums". Instead, I found the book to be superficial on a number of different levels and rather unfair to both the psychoanalytic and biological approaches to psychiatric treatment. As a clinical psychologist, I have had alot of exposure to psychiatric training, psychoanalytic therapy, and the scienitific foundations, as well as practice of biological psychiatry. It is from this background, that I found the book lacking on so many fronts.
Luhrmann never provides a satisfactory definition of what she means by psychoanalytic psychotherapy. What she does is proceed to rule out many contemporary forms of this treatment (e.g., interpersonal psychotherapy), without opeartionalizing what's left. She further confuses writings about different forms of psychoanalytically-oriented treatment, for example misattributing Roy Shafer's opinions from "The Analytic Attitude" to psychoanalysis, when in fact he was talking about psychotherapy. The treatment of biological approaches is even worse. She reduces an evolving area of science into opinion-ridden discourse. Indeed, it appears that she simply has made little effort to understand the biology and pharmacology of psychiatric disorders. Any number of undergraduate or graduate courses in phyisological psychology, pharmacology, etc. could have made this relatively accessible to her. Instead she dismisses science as "just jargon". The shortcomings in this analysis are, unfortunately, obvious for someone with a basic foundation in these biological areas.
The book contains many footnotes, yet the author seems compelled to make sweeping statements about custom & practice in mental health that are unsupported by references. For example, Luhrmann claims that psychanalytic therapy forms the primary basis for psychotherapy training in psychiatry but provides no reference for this. In practice, many psychitaric training programs emphasize other approaches, such as cognitive-behavioral therapies, whose research base fits an evidence-based model of treatment better than most psychoanalytic approaches. Luhrmann also seems surprisingly unaware of the roles and backgrounds of other mental health fields. Nurses, for example, are the backbone of inpatient psychiatry and psychiatric nurse clinicians play a growing role in ERs and in consultation-liaison psychiatry. But she relegates them to a very minor role here.
The writing of this book is often condescending and jargon-ridden which probably makes it inaccessible to much of its intended audience. In this respect it resembles the calssic "Asylums" but it lacks Goffmann's detail and rigor.
People really interested in mental health practice seem more likely to learn from journalistic accounts such as the upcoming history of McLean's or Susan Sheehan's classic "Is There No Place on Earth for Me?".
阅读更多
50 个人发现此评论有用