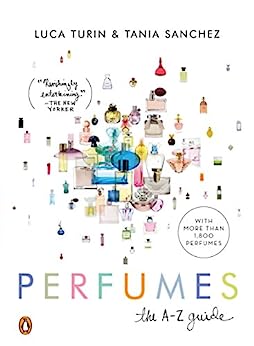 From Publishers Weekly
Starred Review. Less a guide in the sense of helping people choose the perfect fragrance than a wide-ranging, critical review of some 1,200 perfumes, both famous and obscure, this comprehensive book is unfailingly entertaining. A collaboration between Turin, a well-known olfactory scientist, and Sanchez, a perfume collector and critic, the book brings their exquisite connoisseurship to life in a contagious manner. Their passion for a few scents and their outrage at the others' failings make for entry after entry of hilarious, catty comments interspersed with occasional erudite, eloquent disquisitions. French perfumery Guerlain is subject to both: Jicky is an object lesson in perfumery... a towering masterpiece, while Aqua Allegoria Pivoine Magnifica is like chewing tin foil while staring at a welding arc. Other startlingly evocative metaphors abound, especially those comparing perfumes to people, whether someone real (Amy Winehouse, Paris Hilton) or a general type (socialites, someone ill with bronchitis). This will be a must-have for anyone who already loves perfumes, though many of the reviews will cause violent disagreement, and those who aren't utterly perfume-obsessed will still appreciate the opening essays on olfactory science, the history of perfume, general types of fragrances and how to choose perfumes.
(Apr.)
Copyright © Reed Business Information, a division of Reed Elsevier Inc. All rights reserved.

As scintillating as it is comprehensive...this pungent, entrancing book is a wake up call for the nostrils. The Independent An unexpected classic of criticism -- Philip Hensher Spectator (Books of the Year) If you are at all interested in perfume, one of life's greatest sensual pleasures, this is an essential possession -- David Sexton Evening Standard This husband-and-wife team has produced a work of perfume criticism that is as gripping as any thriller. -- Jan Moir Daily Mail I loved it and bought it for all my friends. I have to say that this is certainly my favourite non-fiction book ever and is very likely my favourite book of all time! If I had to take only one book with me onto a desert island for an indefinite time, it would be this one. Joanne Harris - author of 'Chocolat' The perfect gift for the scent addict in your life...witty and informative - and, occasionally, deliciously bitchy. The Times Brilliant writing... I shall now spray on my favourite scents in quite a different frame of mind! -- Joanna Trollope By email hugely engrossing...the writing is brilliant...gorgeous. Evening Standard Lyrical and acerbically witty compendium. The Times From riotous one-liners to elaborate reviews, fragrance experts Luca Turin and Tania Sanchez have written an authoritative guide to the best and worst scents. Daily Express It's a great book because it brilliantly combines technical knowledge with evocative, poetic and often laugh-out-loud-funny prose to provide incisive, vivid and honest criticism of all perfumes - from the 'staggeringly bad' to the 'deeply divine'. If you want to open your mind to the intricacies of scent - and enjoy a brilliant, entertaining read along the way - I can't recommend it enough. Elle consistently entertaining...scathingly inventive bitchiness. Sunday Business Post astonishingly brilliant and witty companion to all things fragrant. Spectator dazzlingly comprehensive compendium...the writing is the olfactory equivalent of mouthwatering. Observer genuinely wonderful...the authors's sense of smell is amazing. Daily Telegraph I was fascinated... a description of every perfume known to man, which sounds peculiar, but is mesmeric. -- William Leith Evening Standard (Books of the year) a staggeringly complete compilation of perfume reviews...ridiculously entertaining. Daily Mail For any fragrance fanatic...an indispensable beauty bible. Norwich Evening News Highly entertaining critique which had me both fascinated and laughing out loud in equal measure... addictive and informative. -- Phyl Clarke Irish Times It's scents-sational! -- Rochelle Warner Fabulous.co.uk A wise investment and an addictive read. -- Gillian Nelis Sunday Business Post The authors' evocative and vivid writing style convinces us that perfume isn't a science but an art. Never again will you be able to walk past a perfume counter with quite the same nonchalance... if you have a nose for a good book, buy this one. -- Anita Sethi Independent on Sunday They're funny, bizarre, weird, hilarious writers. -- Alex Heminsley BBC Radio 2 It's an eau-de-must-have. If it came in a bottle we'd wear it. The City Weekly Magazine (Australia) As riveting as a novel and as therapeutic as a recipe book. -- Jan Masters Reader's Digest --此文字指其他 kindle_edition 版本。

LUCA TURIN is the man who perfume-lovers openly adore. He's the author of The Secret of Scent (Faber, 2006). His top-rated perfume is Guerlain's Mitsouko. TANIA SANCHEZ is journalist and a perfume collector and expert from New York. Her personal perfume collection numbers almost 2000 bottles. They are married and divide their time between Boston and London. --此文字指其他 kindle_edition 版本。

Cool Water (Davidoff) * * * * * aromatic fougère
This beautiful 1988 composition made Pierre Bourdon famous and was imitated more times, I’ll wager, than any other fragrance in history save Chypre. The problem with successful masculines is that you associate them with the legion of aspirational klutzes who wore them for good luck. Trying to assess CW without conjuring up the image of some open shirted prat with hair gel is a bit like the Russian cure for hiccups: run around the house three times without thinking of the word wolf. This said, unlike Chypre, CW belongs to the category of things done right the first time, like the first Windsurfer and the Boeing 707. Countless imitations, extensions, variations, and complications failed to improve on it or add a jot of interest to this cheerful, abstract, cheap, and lethally effective formula of crab apple, woody citrus, amber, and musk. Now let women wear it for a decade or two. LT

L'Air du Désert Marocain (Tauer) ***** incense oriental
The sweet, resinous smell of amber, the smell of the classic perfume oriental, has long been weighed down with vanilla and sandalwood ballast, decorated with mulling spices, bolstered with musk, made come-hither, ready for its closeup, and we are quite used to it—but this is not amber's first life. Perfume, as has been pointed out many times, means “through smoke,” named for the fragrant materials burned to clean the air and therefore the spirit. Since the angel Metatron sees fit to deliver his messages to the world nowadays via the guitar of Carlos Santana, it only makes sense that the as yet unnamed angel of perfume chooses to speak through an unassuming Swiss chemist from Zurich with a mustache and a buttoned shirt. L'Air du Désert is talented amateur perfumer Andy Tauer's second fragrance, after the rich oriental rose of Maroc pour Elle; one hale breath of Désert's vast spaces clears the head of all the world's nonsense. There is something about the ancient smell of these resins (styrax, frankincense) that on first inhalation strikes even this suburban American Protestant with no memories of mass as entirely holy, beautiful, purifying, lit without shadow from all sides. Even without the fragrance's name to prompt me, I would still feel the same peace when smelling it that I've felt only once before, when driving across the Southwestern desert one morning: all quiet, no human habitation for miles, the upturned bowl of the heavens infinitely high above, and the sage and occasional quail clutching close and gray to the dun earth. Each solitary object stood supersaturated with itself, full to the brim, sure to spill over if subjected to the slightest nudge. Wear this fragrance and feel the cloudless sky rush far away above you. TS

Eternity for Men (Calvin Klein) * * * mandarin lavender
An interesting twist on the perennially pleasant citrus-lavender accord using the (musically speaking) flattened note of mandarin rather than straight citrus, or the corresponding sharp of lime. This is a very skillfully composed and likable fragrance, but I wish more cash had been spent on the formula. It smells good but cheap, which would be fine if the overall structure were unpretentious as in Cool Water, whereas it is distinctly aspirational. LT

Tommy Girl (Tommy Hilfiger) * * * * * tea floral
No fragrance in recent memory has suffered more from being affordable than Tommy Girl. It’s as if it were deemed less desirable for being promiscuous. Despite all the historical evidence to the contrary (Brut, Canoe, Habanita, and the first J-Lo), the world is still crawling with naïve snobs who’d rather believe their wallet’s loss than their nose’s gain. Tommy Girl’s origins were explained to me by creator Calice Becker, who was brought up in a Russian household, with a samovar always on the boil and a mother with a passion for strange teas. At Becker’s instigation, the legendary chemist Roman Kaiser of Givaudan sampled the air in the Mariage Frères tea store in Paris to figure out what gave it its unique fragrance. From this a tea base was evolved, in which no one showed much interest. The idea waited several years until Elléna’s excellent but only remotely tea-like Eau Parfumée au Thé Vert (Bulgari) came out in 1993. Its success made it possible for Becker to submit a tea composition for the Hilfiger brief. She won it, eleven hundred formulations later the perfume was finalized, in collaboration with a brilliant evaluator who went on to study philosophy. Tea makes excellent sense as a perfumery base, since it can be declined in dozens of ways, as flavored teas will attest: Soochong, Earl Grey, jasmine, and so on. In that respect it could serve as a modern chypre, a mannequin to be dressed at will. Tommy Girl clothed it in a torero’s trafe de luces, a fresh floral accord so exhilaratingly bright that it could be used to set the white point for all future fragrances. Remarkably, late in the project, Hilfiger’s PR firm asked Becker to give them so e reason to label the fragrance as typically American. Quest’s resident botany expert was called in, and to everyone’s surprise found that the composition fell neatly into several blocks, each apparently typical of a native American botanical. So it goes with projects whose sails are filled by the breath of angels. LT

The composition miraculously turned out to fall into accords typical of native American botanicals? Put me on record as skeptical. Tommy Girl smells great, though, and has been copied relentlessly. TS

Beauty Rush Appletini (Victoria's Secret) * Jolly Rancher
Victoria's Secret has determined that its customers need (1) cleavage and (2) to smell precisely like dime-store candy. You may discern an implicit insult to the male mind in this pair of facts. TS