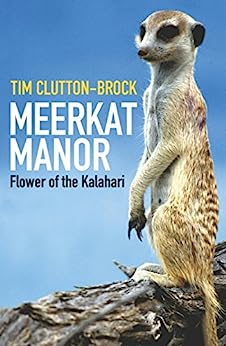 The life of the Meerkats - from the highly successful TV series, and soon to be released major feature film

MEERKAT MANOR is the true-life story of Flower, the heroine of the successful television series, and the dominant female of Whiskers group.

Through words and superb photographs, the reader becomes closely involved in the life-or-death struggles, just like a soap opera, of this curiously attractive tribe.

MEERKAT MANOR not only describes what meerkats do, but explains why they do it, providing important insights into the working of other animal societies, including humans.

'They look cute and their teamwork has led some to suggest they are ideal role models for humans, but ... if MEERKAT MANOR is billed as a soap opera, it is one scripted by Quentin Tarantino' Mail on Sunday.

Tim Clutton-Brock is Prince Philip Professor of Ecology and Evolutionary Biology at the University of Cambridge. His work focuses on the evolution of animal breeding systems and he has studied red deer on the Isle of Rum, Soay sheep on the island of St Kilda and the Meerkats in the southern Kalahari. He is the founder-director of the Kalahari Meerkat project where his contributions to our understanding of animals is based on patient observation in the field. The series of films for television based on his research have become widespread and popular viewing. --此文字指其他 kindle_edition 版本。

Knight
5.0 颗星，最多 5 颗星 Fascinating Companion to Meerkat Manor
2007年10月25日 - 已在美国亚马逊上发表
已确认购买
Meerkat Manor is a television series on Animal Planet which is currently in its third season. The author started the Kalahari Meerkat project and is an adviser to the TV show. The book covers the life of Flower, one of the "stars" of the show. It also details how the project started, the focus of the research, what they've learned, and what life is like for the researchers. He also includes a list of scientific publications, a timeline for Flower's life, and a list of her pups and what happened to them.

Of course, the major focus of the book is on the meerkats themselves. The book does an excellent job of outlining the lives of meerkats, and often compares and contrasts meerkats to other animals. There are a lot of fascinating details that have never been mentioned in the show, such as how Zaphod came to join the Whiskers (when I read it, I literally put the book down and said, "Wow, really?!").

The book is fairly large and of high-quality construction. It feels similar to a good coffee table book. The book includes hundreds of beautiful pictures, including many full-page and two-page spreads.

All-in-all, it's an excellent read for anyone who has an interest in nature.

L. Wier
5.0 颗星，最多 5 颗星 Flower Feast
2008年10月7日 - 已在美国亚马逊上发表
已确认购买
A feast for Flower lovers or anyone who can't get enough of Meerkat Manor! Substantial weight "slick" paper (used for entire book) gave each picture a "hi-def" look, and there are plenty of them.
Aside from more detailed insider information (written by Cambridge
Professor Tim Clutton-Brock) there are maps of the Manor divided into
the territories held by the major meerkat clans, a chronology of Flower's life, geneological notes on Flower's children, and full-color pictures on nearly every page. Prof. Clutton-Brock has been
studying the meerkats of this area since 1993 and has done a marvelous
job of organizing and delivering a thorough and enjoyable discussion
of all things meerkat, and of Flower in particular.
I highly recommend this book for all meerkat lovers. It is worth every
penny. I know you won't be disappointed.
阅读更多
20 个人发现此评论有用

H. Kizewski
5.0 颗星，最多 5 颗星 Excellent Book for All Who Love Meerkat Manor and Flower
2007年11月23日 - 已在美国亚马逊上发表
已确认购买
This was truly an excellent book about these incredible little animals. It covers the entire life of Flower, from her birth to her tragic death. It also mixes in general information about meerkat society in more detail than the TV show can possibly cover. The author writes in a manner that is almost detached, and very unemotional. While he does care deeply for these animals, he doesn't try to romanticize their lives and presents them as they really are.
I was especially interested in reading this book to learn the truth of Flower's death. I was very disturbed when I heard that the show was a set-up and the events were skewed by editing. This book sheds light on what really happened to her. Her death is tragic enough; I don't understand why the show would give us such blatantly false information. For those of you who don't know the real events surrounding Flower's death, I won't spoil the ending for you. Read this book for answers.
阅读更多
8 个人发现此评论有用

George Leroy Tirebiter
4.0 颗星，最多 5 颗星 Great Eye Opening Companion To The Series.
2013年12月28日 - 已在美国亚马逊上发表
已确认购买
There's was a whole lot of death and destruction that happened during the period of filming Meercat Manor. This book follows how meercats really live. While the series is basically a soap opera that anthropomorphizes these mammals, in real life, they kill their young regularly, drive their sisters out of the gang to die, and generally are not as cute and cuddly as the series depicts. This is a book you really can't put down.
阅读更多
1 个人发现此评论有用

Paul M. Destefano
5.0 颗星，最多 5 颗星 Fills in the Science
2008年6月29日 - 已在美国亚马逊上发表
已确认购买
Gives details of the Meerkat project that are sometimes only touched briefly in the Animal Planet TV series. There is heavy emphasis on reproductive strategies such as male roving and the frequent practice of infanticide of sibling's pups by pregnant females. Definitely for the reader who wants a deeper understanding of the sociobiology of another mammalian species not for someone who expects a gushing anthropomorphic indulgence. For that, view the movie!
阅读更多
12 个人发现此评论有用