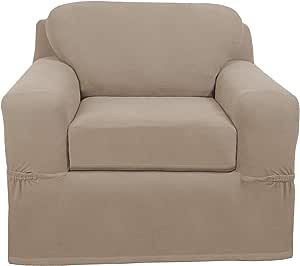 Recliner and Wing chair are available in limited collections

We recommend measuring your furniture's length, width, and back height. Standard shape shown in the images fit best with wide arms. All will fit T-cushions.

Innovation in beauty, function, and design

Stretchable, solid color, fabric slipcovers from Maytex are an easy way to update your furniture. Our patented two piece construction has elastic corners, no more ties, and a better fit. No more slipping and constant tucking.

Give your furniture an entire fresh new look with crisp, clean solid colors. Available in other colors and sizes to completely coordinate your room.

Easy to install and care for, it is machine washable polyester/spandex.

Emily
5.0 颗星，最多 5 颗星 A fantastic slipcover!
2016年12月22日 - 已在美国亚马逊上发表
已确认购买
I am so impressed by this product! I ordered the slipcover for the sofa and for the loveseat. I have been searching for a cover for my couches to protect them from my cat. This hasn't stopped my cat from scratching, but she sort of scratches underneath the cover so any deterioration will be on the couch underneath, not this cover. Anyway, while this may not be a great shield from my cat's claws, it is still an amazing slipcover. I actually think I prefer the looks of my couch with the slipcover on.

I ordered the Olive Green color. Caveat: I received a Light Grey color. However, I wanted a Grey color. I read previous reviewers who ordered Olive Green were receiving a Grey color instead so that is why I ordered this color. Also the company has a Charcoal color listed that was double the price, so I took my chances. The color received is not Green at all so if you are looking for Green be warned.

The product comes with a cover for the entire couch excluding the seat cushions. A separate cover for the cushions is provided. The two pieces makes a world of difference in the looks of this slipcover over your couch. Plus it is easier to apply this cover as two pieces versus slipcovers which are only one piece. The cushions have a zipper which did seem very flimsy and cheap. Mine didn't break, but it was not working 100% properly either. Once the cushions are in and placed on the couch, you can't see the zipper. There are tags on the cover to help you locate the front center, etc for applying the cover. I recently removed the tags. I did not have the issue others had where parts of the tag were stuck in the seam. For the most part the tag ripped cleanly off and any extra pieces I was able to detach.

Honestly I think the cover looks great. It was relatively easy to get it on both of my couches. I did receive help doing it though. There is a ton of extra fabric to both pieces, but this helps to make the couch look nicer because you can just tuck it until you get the look you want. Although the cushion piece is only one cover, you can tuck the fabric in between the cushions to make it look like they are separate. When you sit on the couch, the fabric may shift some, but it's only on the cushion portion. It takes probably 30 seconds or less to readjust the fabric and sometimes the fabric does not move at all. The two pieces really helps in this regard though since you'd only need to readjust the cushion fabric.

The material of this cover is extremely soft. It actually feels nicer than the material on my actual couch. This cover is not super thick, but seems adequate. I have not noticed it receiving any rips from my cat jumping on it. The cover also fully covers your entire couch, even the back. It may take some adjusting to get it looking just right, but I think most can configure the cover to lay properly and look nice on their furniture.

I have attached photos showing how the cover looked after I first applied it. I also showed a photo of the back of one couch to see how it looks. The cover doesn't look as nice on the back, but it at least covers the whole back. The front looks amazing, and I don't think most people would immediately realize the couch had a slipcover on it. I would recommend this product 100%. Other slipcovers I tried looked terrible in comparison. At the very least, if you are searching for a slipcover, I would recommend buying one with two pieces. That makes a huge difference in how the slipcover looks. Overall I am extremely satisfied. I will update this review if I notice the slipcover not holding up well over time but for now I rate this product 5 stars.

aj
1.0 颗星，最多 5 颗星 Maybe weak seams, but great fit!
2017年7月18日 - 已在美国亚马逊上发表
已确认购买
First off, I want to say that I love the fit of this cover. It has been the only one that I have found that will cover all of this couch! But what stinks is that it either came with a rip or somehow ripped when we put it on just now. I will get some needle and thread today to patch it up rather than returning it because of how much I love the fit. I just hope the rest of the seams hold up!
Edit- by the next day anoth rip occurred up on the corner. So it does have weak seams and isn't going to last very long unfortunately!
阅读更多

Megaan J. Becker
5.0 颗星，最多 5 颗星 So much better than expected!
2017年6月28日 - 已在美国亚马逊上发表
已确认购买
We're using my mother's antique velvet couches until we decide/save up for the ones we really want as she needed a place to store them and it helps us for now. Anyway they have a curved back, winged arms and claw feet and I wasn't sure how nicely a slipcover would work. It covered and tucked in amazingly well! Easy directions, I like the fabric, and am so glad we got a two piece design as it really helps everything stay in place to have the cushions separate. It's not the same as a new couch but I am pretty happy with the results for now. Definitely recommend this product.
阅读更多

Mark
5.0 颗星，最多 5 颗星 Great cover and fit.
2016年8月20日 - 已在美国亚马逊上发表
已确认购买
I've ordered a few slip covers but none have worked and fit properly like this one has. It's easy to put on, looks great and is durable which is all we can ask for. With some work and safety clips you can make it look totally custom made and tailored but it looks just fine without all the extra hubbub.
I'd buy this again without hesitation.
阅读更多

Mark
1.0 颗星，最多 5 颗星 Tags sewn onto the OUTSIDE of the cover. Have fun removing the sewn in bits of paper.
2018年2月17日 - 已在美国亚马逊上发表
已确认购买
Tags are sewn around the cover (labelled back, front, arm, arm, tuck, tuck) on the OUTSIDE of the couch cover. This is not necessary. If you did happen to install the cover inside out it would be painfully obvious that you did so. First you'd see the giant white elastic strips going around the back corners, then you would see the back sides of the seams which are extra wide and look awful.

I did not enjoy spending LOTS of time removing these tags. Even if you are very careful on removal there is still a strip of paper behind the stitching which is clearly visible as white strip running along the seam. Loads of laughs breaking out the tweezers and exacto knife to coax this paper out, bit by bit.