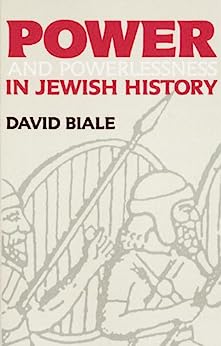 英语版本 David Biale (作者) 格式: Kindle电子书
|
分享
分享 <分享样章>
广告
显示所有 格式和版本 隐藏其他格式和版本
To shed light on the tensions he observed between Jewish perceptions of power versus political realitieswhich "are often the cause of misguided political decisions," like Israel's Lebanese WarBiale analyzes Jewish history from the point of view of politics and power.

The author of Gershom Scholem: Kabbalah and Counter-History here challenges the conventions of what he terms the Jewish "mythical past": the anachronistic interpretation that the Diaspora, which occurred between the fall of an independent Jewish commonwealth in A.D. 70 and the rebirth of the State of Israel in 1948, was politically impotent, and, conversely, that the First and Second Temple periods were eras of full Jewish national sovereignty.
阅读更多
Previous page
Next page
›  查看更多商品促销信息

“The most important point of David Biale’s valuable study is that Jewish political history extends across the centuries of the Diaspora; it is a continuous history, not one cut off at the fall of the Second Jewish Commonwealth. Biale is especially good at evoking the internal life of those autonomous or semi-autonomous communities within which the political sensibility of contemporary Jews first took shape.”
—Michael Walzer

“A relevant and studious book that should interest readers of Jewish history or anyone interested in Israel’s place in today’s world.
—
Booklist

“His succinct, thoroughly researched, insightful arguments . . . are sure to spark controversy.”
—Publisher’s Weekly

Biale’s work demonstrates the best of contemporary Jewish scholarship. Historically informed and critically based, it is a brave work attacking a metahistory of the Jewish people and unmasking propagandists and those who would mystify rather than write truth.”
—Jewish Exponent --此文字指其他 kindle_edition 版本。

David Biale is the Koret Associate Professor of Jewish History and Director of the Center for Judaic Studies at the Graduate Theological Union in Berkeley, California. He won the JWB National Jewish Book Award in 1980 for his previous book, Gershom Scholem: Kabbalah and Counter-History. --此文字指其他 kindle_edition 版本。

Aaron Eitan Meyer
2.0 颗星，最多 5 颗星 Some interesting theories but...
2003年10月17日 - 已在美国亚马逊上发表
While there is an interesting premise to this work, the history itself doesn't back it up. Biale admirably tries to back up his thesis, and seems at times to be successful. However, it is not only at first glance that this book's information seems largely counter-intuitive. The simple fact of the matter is, as Monroe Rosenthal's book on the subject elucidates, the military tradition has not only been a constant presence in Judaism as a whole, but has been the real guaranteur of Jewish preservation throughout most of history. It is when power in the martial sense is wholly detached from the conception of the Jew that he becomes a free target to all who wish him ill, which is to say many nations and individuals throughout the course of history. It was the existence of the Jewish Parthian cataphracts that in all likelihood caused the Eastern Roman (Byzantine) Empire to refrain from additional pogroms. In the end, while an interesting book to read, and again a change of pace, this book is not the most accurate of analyses of power in Jewish history. Still, if you wish to find evidence to back up certain left-wing theories vis-a-vis modern Israeli deterrence capabilities and the counterproductive impact they have on overall Jewish affairs, this might be the best book for you. Still, I wouldn't recommend this as your focal work to support an educated theory on the subject.
阅读更多
9 个人发现此评论有用

Reader of Books
5.0 颗星，最多 5 颗星 Excellent Study
2005年10月8日 - 已在美国亚马逊上发表
Biale has filled the vacuum that one seems to get the impression of and defeats the nonsensical myths one tends to get from biased sources. This is a well researched and illuminating tour through Jewish political relations for over 3,000 years. One gets a better understanding of Jews and Gentiles, Imperial Powers and a small ethno-relgious-cultural groups struggle to not be absorbed like most others. One gets a better understanding of how anti-semitism had arisen rather than the typical "unexplainable and irrational" answer that defies logic itself.
阅读更多
9 个人发现此评论有用