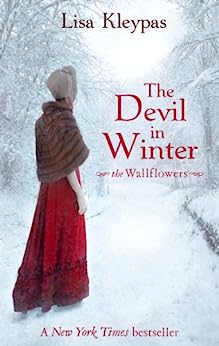 The Devil in Winter (The Wallflowers Book 3) (English Edition) Kindle电子书

A few years ago I picked up my first Lisa Kleypas novel and have since devoured almost everything she's written. I could re-read this one over and over again (Samantha Young) --此文字指其他 kindle_edition 版本。

New York Times bestselling author Lisa Kleypas graduated from Wellesley College with a political science degree. She’s a RITA award-winning author of both historical romance and contemporary women’s fiction. She lives in Washington State with her husband Gregory and their two children.

TheresaMW
5.0 颗星，最多 5 颗星 How to Reform a Rake Done Right
2018年1月13日 - 已在美国亚马逊上发表
已确认购买
This is the third book in this series, and it was amazing! It can be considered a standalone, but reading the previous ones definitely helps to appreciate the full character development for these two.

This story focuses on Evie and Sebastian. They're an unlikely pair as ever found, but there is just enough stubborn independence in Evie to make her capable of bringing it all together. She is a patient, quiet woman with a steel will and is tired of being hurt by her family. Sebastian is a desperate, charming, charismatic, seemingly selfish and heartless rake. He has fallen to his greatest depth, and when he agrees to a marriage of convenience with Evie, he shows every part of him, good and bad, as he tries to get enough money to survive. He's always had a way with women, and being able to charm anyone, able to see other's needs, and it was only the start of what he did for Evie. The two fought, enjoyed heated moments, and learned to worry and care for one another in such a way that you can't help but like them both, but especially Sebastian after seeing what he used to be. Their connection was odd and powerful at first, and grew into something much deeper and more satisfying with time.

Overall, I really loved this book! This story had a fantastic bit of romance, a great redemption story, more bits of friendship that were lovely to see expanded, and two developed characters. The story was engaging and flowed well, and was edited well. I recommend this book, as well as the whole series!
阅读更多
4 个人发现此评论有用

H. Clawson
5.0 颗星，最多 5 颗星 Great book of opposites attracting, need to read first two books FIRST
2019年5月3日 - 已在美国亚马逊上发表
已确认购买
Devil in Winter, the third in the Wallflowers series by Lisa Kleypas, focuses on Evie Jenner, a horribly shy member of the group of four women who have dubbed themselves the Wallflowers and vowed to help each other find husbands. Evie’s temerity and stammer have made her chances at a match almost nonexistent, and her mother’s strict family refuses to allow her to see her ailing father. Desperate, Evie turns to the one person she knows to be equally as driven to change his circumstances, Sebastian, Lord St. Vincent, possibly the most dissolute rake in London.

In this book, rather than focusing on social disparities as she has in the past two books in the series, Kleypas examines the relationship between two people of far different temperaments and expectations of life. Interestingly, the reader asks how two such different personalities could possibly make a relationship work. In what ways may they influence each other, and if they change for the other can they still stay true to themselves?

Evie and Sebastian are both endearing characters who you can’t help but root for. The book is fast-paced and introduces some interesting new side characters, while including some from the previous two books as well. It directly follows the events of the second book, It Happened One Autumn, and draws very heavily on many of those events and relationships.
阅读更多
1 个人发现此评论有用
加入亚马逊Prime，从此免运费
亚马逊Prime会员可享海外购美/英/日/德跨境免邮，全年无限次！更有免费无限次阅读电子书服务
> 立即加入
了解我们
合作信息
帮助中心和购物指南