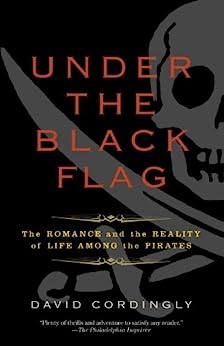 Under the Black Flag: The Romance and the Reality of Life Among the Pirates (English Edition) Kindle电子书

“[A] wonderfully entertaining history of pirates and piracy . . . a rip-roaring read . . . fascinating and unexpected.”—Men's Journal

This rollicking account of the golden age of piracy is packed with vivid history and high seas adventure. David Cordingly, an acclaimed expert on pirates, reveals the spellbinding truth behind the legends of Blackbeard, Captain Kidd, Sir Francis Drake, the fierce female brigands Mary Read and Anne Bonny, and others who rode and robbed upon the world's most dangerous waters. Here, in thrilling detail, are the weapons they used, the ships they sailed, and the ways they fought—and were defeated. Under the Black Flag also charts the paths of fictional pirates such as Captain Hook and Long John Silver. The definitive resource on the subject, this book is as captivating as it is supremely entertaining.

Praise for Under the Black Flag

“[A] lively history . . . If you've ever been seduced by the myth of the cutlass-wielding pirate, consider David Cordingly's Under the Black Flag.”—USA Today, “Best Bets”

“Engagingly told . . . a tale of the power of imaginative literature to re-create the past.”—Los Angeles Times

David Cordingly is the world's foremost expert on pirates. For many years the curator and head of exhibitions at the famed National Maritime Museum in Greenwich, England, he has written several acclaimed books on the subject of pirates. He lives by the sea in Sussex.
--此文字指其他 kindle_edition 版本。

Johnny Avacado
4.0 颗星，最多 5 颗星 The truth about pirates—at last!
2023年1月29日 - 已在美国亚马逊上发表
已确认购买
The book drags and takes overly long to get to many points—hence the four star rating. But otherwise is the singular honest book about the reality of pirates. Not as glamorous hollywood fiction, but the murderous and cowardly thugs they really are. Beautifully documented and the true history and story of the work skunk pirate that ever lived, 'Blackbeard.' And the heroic effort of a British admiral who took the thug down in a personal bloody sword fight; who nearly lost his own life in the effort. Great book—other than beaing 20% longer than necessary.
阅读更多

Bama Fan
4.0 颗星，最多 5 颗星 Good comprehensive overview of piracy.
2022年9月7日 - 已在美国亚马逊上发表
已确认购买
I became interested in this topic after reading Stephen Johnson's book Enemy of All Mankind and saw this one pop up. This book provides a good overview of many different pirates and their legacies based upon books and writings that the author researched to include within the book. There are details of different pirates spanning different territories and different years and it provides as realistic of a picture as seems possible. I learned a lot by reading it and enjoyed how the author presented the information. Overall pretty good book worth your time!
阅读更多
2 个人发现此评论有用

doc peterson
5.0 颗星，最多 5 颗星 Separating the myth and romance from the reality
2013年8月2日 - 已在美国亚马逊上发表
已确认购买
As a fan of nautical fiction ( Master and Commander (Vol. Book 1) (Aubrey/Maturin Novels) ), and having read Cordingly's  Women Sailors and Sailors' Women , _Under the Black Flag_ was a natural choice for a summer read. Cordingly does a magnificent job of providing details of pirate life: who these men (and women) were, why they became outlaws on the sea and what their lives were like. For me, these were the most fascinating parts of the book. Brief biographies of the better-known pirates (Cpt. Kidd, Blackbeard, Henry Morgan, Anne Bonny, Grace O'Malley) are provided, as well as some pirates I was previously unfamiliar with (Alwilda, Mrs. Cheng, Calico Jack). The stories of plunder, pieces of eight and treasure appealed to the boy in me as well.

His iconoclasm was interesting, dispelling the myths that have arisen around pirates (pitched battles of ships exchanging broadsides, for example - most pirates were reluctant to do so for fear of damaging or sinking their prize, most merchant ships simply heaving to once the pirates made themselves known). Cordingly going so far as to provide explanations for many of these misconceptions - burying treasure (most of it was spent once ships returned to port), walking the plank and marooning (much easier to simply throw folks overboard), wooden legs. The seeds of truth that began these misconceptions and the way in which fictional pirates borrowed from one another (Defoe, Byron, Barrie, Stevenson) was fascinating, and gave me a new appreciation of Cpt. Hook and Long John Silver. His criticism and evaluation of pirate portrayals in film was also excellent.

In his conclusion, Cordingly explains the cognitive dissonance between who pirates were and how we imagine them today, writing "The passing of time has mellowed the harsh picture which is revealed in the depositions of seamen who were attacked by pirates ... the films of the thirties and fourties took the pirate stories of fact and fiction and added glamour. ... The fact is that we want to belive in the world of the pirates as it has been portrayed in the adventure stories, the plays ad the films over the years." While the truth is much more brutal and for many of the time, unpleasant, pulling the curtain aside makes for rich, fascinating reading. Highly recommended.
阅读更多
7 个人发现此评论有用

mp0307
5.0 颗星，最多 5 颗星 A great read
2022年10月1日 - 已在美国亚马逊上发表
已确认购买
I’ve really enjoyed this history of pirates and buccaneers operating in the Caribbean and Americas. Far from a dry and boring history, it appears to be supported by historical documents which make for an interesting read. If you’re into pirate history, this is a good start.
阅读更多
3 个人发现此评论有用