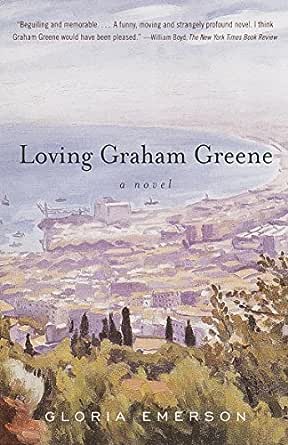 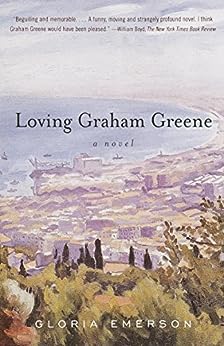 
"This is a passionate novel, written with great skill. It is a book about pity and its consequences, and a woman who would not stand aside."
--Ward Just


"What a wonderful book. I love it and love Molly. Gloria Emerson writes about the karma of being American. Loving Graham Greene is a great global novel; its quixotic heroine dares to live the ideals we hold dear."
--Maxine Hong Kingston --此文字指其他 kindle_edition 版本。

The frightening postcard from Antibes, with his message written in that tiny, tight English handwriting, said he would not be at home in France when she was planning to visit, for he was going to Switzerland for treatment of anemia. Alas, Graham Greene wrote. Molly Benson knew what anemia meant; an American would have named the disease, but she thought only his close friends would be properly notified. A blood disorder, the family would say. He gave a telephone number for the apartment in Corseaux where he was moving, to be near the hospital, to have the innumerable blood transfusions that he would find so intolerable; but it was two weeks before she managed to call. It was never her habit to ring him; for years, she only used the mail. Her panic grew so acute that she dialed clumsily, reached a wrong number, and was chided by a cantankerous woman, who suspected a wicked prank. Then she was able to reach him. His voice was higher and thinner now, and all that  was required of her, she thought, was to make him laugh, hardly one of her gifts. She spoke too rapidly and in a loud voice, although his hearing was very good. It was his eyes that were failing, he said; he could not read. This was unthinkable.

"I wanted you to know that the kiosk from The Third Man that Harry Lime used to get down into the sewer," she said, as if medication or pain might have blurred memory of his own great film, "has been re-created in an arcade on Fifty-fifth Street. It looks strange, because it is gilt. It is called Gottfried's and sells magazines and newspapers."

She was certain that he gave a low chuckle, and then provided an end to the conversation, for she would have gone on too long and he had to be careful of this.

"Thank you for calling," Graham Greene said. "And good-bye." It was such a drawn out good-bye, his voice lifting at the end of the word, as if he were leaning out the window of a steam-engine train beginning to pull out and hoped to be heard. It was not yet two in the afternoon, but she could do nothing except rush to bed and pull the quilt over her head, not caring that she still had her clothes and shoes on, wanting it to be very dark, wishing she had sent him her love, although he did not need that from her.

Hours later Molly thought she should fix a drink, something new to her, but there was no gin in the kitchen cupboard, which is what she needed to make a toast in his honor. She stood in front of the three shelves where the work of his lifetime was arranged so carefully, year by year. All the countries where he went for material--Mexico, Vietnam, Sierra Leone, and the Congo; Cuba, Paraguay, and Argentina; Spain and Panama; Sweden and England. Muddled, Molly remembered that Graham Greene drank gin that afternoon in Antibes, from the bottle of Tanqueray she had bought at the airport as a gift for friends, which  she impulsively bestowed on him, to his amusement. She was also, now, in her hour of grief, persuaded that his great and most haunting male characters always drank gin, forgetting that Fowler, among others, in The Quiet American, preferred scotch at home in the old Saigon when it belonged to the French, or a beer on the terrace of the Continental. She made her silly toast, something about the talent and generosity of the man, his courage and wit, holding up a mug of tea to the books, and felt no better for it. "To Graham Greene," she said out loud before the weeping began. She could not hear the noise coming from her own throat, which was a harsh gurgle. "His genius and his goodness." She even prayed, back in bed, that he be spared more tubes and needles, the fiddling of nurses, the ring of solemn, neat doctors around his bed, and slide calmly into a coma, curious and happy to finally see what was waiting for him. It made her hiccup, as she had as a child when excited or upset, so she put her face inside a paper bag and took deep breaths.

In Princeton, where she found the weather fickle and sad, no one seemed to know that Greene was dying, and she was grateful for this. Standing before a mailbox in Palmer Square in front of the little post office, Molly Benson raised a stamped letter to her lips and gravely kissed it. There was the sense this was the last letter she would write to Graham Greene, and she felt sick and did not move.

A tall, stout young Englishman, mailing a T-shirt to his sister at home, said: "Is everything all right?" His was a good-humored, ruddy face.

"How sad," said Toby Plunkett, who talked to everyone, everywhere, in his a high-pitched voice that told of his pleasure at being abroad. He was like a tap out of which words flowed and could not be turned off.

"Do come and have some coffee. Perhaps you will feel better," said Toby, who had seen her in the little bookstore and thought her aloof. She did not often wait on customers except at Christmas, when people seemed at such a loss, muddled about the titles of books they thought they wanted and suspicious of best-sellers. They were steadied by Molly's firm opinions. That day she needed someone to sweep her away from Palmer Square, which Toby did, and her melancholy did not dent his boyish spirits; he did not need her encouragement to talk about himself. He gobbled two doughnuts with his coffee and she paid, which he seemed to expect.

Graham Greene died at the age of eighty-six in April  of that year, 1991. Molly comforted herself by saying that surely he did not want to go on too long, but now her face showed what so many other faces did, the old despairing expression of life.

It was fourteen years since they had met and talked. She knew that he did not easily submit to the earnest and probing questions of journalists, or anyone else, on the modern soul or the religious and political motives in his work. People wanted to find out everything--even if he got down on his knees to pray and if he attended mass. It annoyed him, he said, to hear the word "Greeneland," as if he had invented such a terrain and there was not a real world of barrios and open sewers, of tin shacks and too little food. Molly wanted to ask if Father Rivas in The Honorary Consul was in any way inspired by the real Father Camilo Torres, who joined with guerrillas in Colombia and was killed. But she was too timid and, in her happiness at being with him, asked nothing except how Ho Chi Minh, whom Greene had talked to so long ago, might have learned English, as he had noted in an article.

How many times, Molly thought, had Graham Greene accommodated the stranger who had so little to offer and was of less interest than the most minor character he had created.

The huge obituary for Greene was on the front page  of The New York Times below the fold, and even Molly approved of it.

In New York, Molly's best friend, Bertie Einhorn, was drinking carrot juice for breakfast and talking to her husband about Greene.

"Of course he was a wonderful writer, but the women  in his novels were so often prostitutes," said Bertie. "There was that idiot Phuong in The Quiet American and Clara in The Honorary Consul."

"I think you slightly exaggerate," said Arnold. "I thought Aunt Augusta was hilarious--remember Travels with My Aunt? And for God's sake don't make that comment to Molly. She'll be on the phone with you for hours."

"No, she couldn't bear it," said Bertie, who had only read those two novels, although she pretended otherwise.

"And Our Man in Havana was hilarious," said Arnold. "He was an extremely funny writer." It was his last word.

Molly was not Greene's only American admirer by any means, but none were held by such a fierce and obsessive attachment as she. "He taught me everything," she would say when people would ask the reason she so loved his novels, and the man as well. It was hardly an answer. She kept on looking in newspapers and magazines for any mention of his name, his novels, the terrain of Greeneland, or tapes from any of the interviews done so long ago. She asked other people to be on the lookout too, but there was rarely  a response. Friends did not bother, or want to encourage, what they considered a morbid or uninteresting eccentricity. Molly's mother, Diana Benson, would say it was just a little hobby, but knew better. It was Molly's secret that she planned to give a scrapbook to Graham Greene's grandchildren, who would surely cherish it and show to their children, but details of how to bestow such a gift were still vague.

"I can't bear the mail now. There will never again be a letter from him," Molly said to her mother as the year of Greene's death finally came to an end. She could not bother to open any of her thirty-six Christmas cards, putting them in a box on the floor of a closet, behind a jumble of shoes she no longer wore and intended to give away.

"Really, dear, you must pull your socks up," said Mrs. Benson, who was not much of a reader and therefore puzzled by the intensity of her daughter's feelings for a man  she had only seen once. It was not becoming behavior. What offended Mrs. Benson, who did not choose to admit it, was Molly's grief for anyone other than her older brother, Harry, who was killed in 1981 in a small, ravaged country where Spanish was spoken. Sometimes she even forgot its name. For ten years the two women never spoke of him, seeing this silence as sacred, as if the mention of  his name might somehow vulgarize or diminish the immense, constant loss they felt, a steel lid just above their heads that would never be removed. Once, Molly tried to explain her devotion to Graham Greene to her mother. "He took sides," she said. "He was fearless." No one who he... --此文字指其他 kindle_edition 版本。

Gloria Emerson's book Winners & Losers, on the Vietnam War and its effects on Americans, won a National Book Award in 1978. She has traveled to El Salvador, Gaza, and Algiers. --此文字指其他 kindle_edition 版本。
阅读更多
click to open popover

Mike Knott
4.0 颗星，最多 5 颗星 3.75
2017年5月22日 - 已在美国亚马逊上发表
已确认购买
I liked it, maybe not immensely, but the imagined relationship between author and activist is worth it. Fiction with a hook in reality.
阅读更多

CM
2.0 颗星，最多 5 颗星 Not What I Expected
2013年7月22日 - 已在美国亚马逊上发表
已确认购买
I was looking more for a novel such as one written by Mr. Greene. I read some good reviews of this and enjoy reading Mr. Greene's stories so I was disappointed.
阅读更多
1 个人发现此评论有用

Lauren Hahn
3.0 颗星，最多 5 颗星 Just one question
2013年7月21日 - 已在美国亚马逊上发表
已确认购买
This is a very entertaining novel; if you are a Graham Greene fan, you will love it. HOWEVER. Can someone tell me why this book is available on Kindle but NOT ONE of Graham Greene's novels is available??? Utterly bizarre.
阅读更多
加入亚马逊Prime，从此免运费
亚马逊Prime会员可享海外购美/英/日/德跨境免邮，全年无限次！更有免费无限次阅读电子书服务
> 立即加入
了解我们
合作信息
帮助中心和购物指南