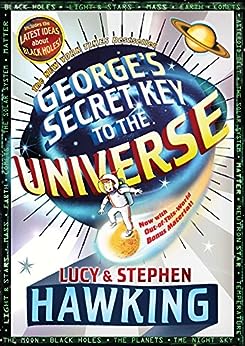 "It is like a Dr Who adventure, inspiring curiosity and amazement. It makes a case for the relevance and fascination of physics, and for the importance of scientists and eco-warriors working together to save the planet. With a happy circularity, the plot depends on a recent discovery: Hawking Radiation, the leaking of particles out of black holes until they destroy themselves" (The Sunday Times)

"
Gripping, informative and funny" (The Bookseller)

STEPHEN HAWKING is the Lucasian Professor of Mathematics and Theoretical Physics at the University of Cambridge and is widely regarded as one of the most brilliant theoretical physicists since Einstein. His adult book A Brief History of Time has been a publishing sensation.

LUCY HAWKING is the author of two adult novels, and has written for the Daily Mail, the Telegraph, The Times and the Evening Standard and has been a guest presenter and regular contributor on radio.

Pigs don't just vanish, thought George as he stood staring into the depths of the very obviously empty pigsty. He tried closing his eyes and then opening them again, to see if it was all some kind of horrible optical illusion. But when he looked again, the pig was still gone, his vast muddy pink bulk nowhere to be seen. In fact, when George examined the situation for a second time, it had gotten worse, not better. The side door of the pigsty, he noticed, was hanging open, which meant someone hadn't shut it properly. And that someone was probably him.

"Georgie!" he heard his mother call from the kitchen. "I'm going to start supper in a minute, so you've only got about an hour. Have you done your homework?"

"Yes, Mom," he called back in a fake cheery voice.

"He's fine! Fine!" said George squeakily. He threw in a few experimental oinks, just to make it sound as though everything was business as usual, here in the small backyard that was full of many, many vegetables and one enormous -- but now mysteriously absent -- pig. He grunted a few more times for effect -- it was very important his mother did not come out into the garden before George had time to think up a plan. How he was going to find the pig, put it back in the sty, close the door, and get back in time for supper, he had no idea. But he was working on it, and the last thing he needed was for one of his parents to appear before he had all the answers.

George knew the pig was not exactly popular with his parents. His mother and father had never wanted a pig in the backyard, and his dad in particular tended to grind his teeth quite hard when he remembered who lived beyond the vegetable patch. The pig had been a present: One cold Christmas Eve a few years back, a cardboard box full of squeaks and snuffles had been delivered to their front door. When George opened it up, he found a very indignant pink piglet inside. George lifted him carefully out of the box and watched with delight as his new friend skidded around the Christmas tree on his tiny hooflets. There had been a note taped to the box. Dear all! it read. Merry Christmas! This little fellow needs a home -- can you give him one? Love, Grandma xxx.

George's dad hadn't been delighted by the new addition to his family. Just because he was a vegetarian, it didn't mean he liked animals. Actually, he preferred plants. They were much easier to deal with: They didn't make a mess or leave muddy hoofprints on the kitchen floor or break in and eat all the cookies left out on the table. But George was thrilled to have his very own pig. The presents he'd received from his mom and dad that year were, as usual, pretty awful. The home-knitted purple-and-orange striped sweater from his mom had sleeves that stretched right down to the floor; he had never wanted a xylophone, and he had a hard time looking enthusiastic when he unwrapped a build-your-own ant farm.

What George really wanted -- above all things in the Universe -- was a computer. But he knew his parents were very unlikely to buy him one. They didn't like modern inventions and tried to do without as many standard household items as they could. Wanting to live a purer, simpler life, they washed all their clothes by hand and didn't own a car and lit the house with candles in order to avoid using any electricity.

It was all designed to give George a natural and improving upbringing, free from toxins, additives, radiation, and other such evil phenomena. The only problem was that in getting rid of everything that could possibly harm George, his parents had managed to do away with lots of things that would also be fun for him. George's parents might enjoy going on environmental protest marches or grinding flour to make their own bread, but George didn't. He wanted to go to a theme park and ride on the roller coasters or play computer games or take an airplane somewhere far, far away. Instead, for now, all he had was his pig.

And a very fine pig he was too. George named him Freddy and spent many happy hours dangling over the edge of the pigsty his father had built in the backyard, watching Freddy root around in the straw or snuffle in the dirt. As the seasons changed and the years turned, George's piglet got bigger...and bigger...and bigger...until he was so large that in dim lighting he looked like a baby elephant. The bigger Freddy grew, the more he seemed to feel cooped up in his pigsty. Whenever he got the chance, he liked to escape and rampage across the vegetable patch, trampling on the carrot tops, munching the baby cabbages, and chewing up George's mom's flowers. Even though she often told George how important it was to love all living creatures, George suspected that on days when Freddy wrecked her garden, she didn't feel much love for his pig. Like George's dad, his mom was a vegetarian, but George was sure he had heard her angrily mutter "sausages" under her breath when she was cleaning up after one of Freddy's more destructive outings.

On this particular day, however, it wasn't the vege-tables that Freddy had destroyed. Instead of charging madly about, the pig had done something much worse. In the fence that separated George's garden from the one next door, George suddenly noticed a suspiciously pig-sized hole. Yesterday it definitely hadn't been there, but then yesterday Freddy had been safely shut in his sty. And now he was nowhere to be seen. It meant only one thing -- that Freddy, in his search for adventure, had burst out of the safety of the backyard and gone somewhere he absolutely should not have gone.

Next Door was a mysterious place. It had been empty for as long as George could remember. While all the other houses in the row had neatly kept backyards, windows that twinkled with light in the evenings, and doors that slammed as people ran in and out, this house just sat there -- sad, quiet, and dark. No small children squeaked with joy early in the morning. No mother called out of the back door to bring people in for supper. On the weekends, there was no noise of hammering or smell of fresh paint because no one ever came to fix the broken window frames or clear the sagging gutters. Years of neglect meant the garden had rioted out of control until it looked like the Amazon jungle had grown up on the other side of the fence.

On George's side, the backyard was neat, orderly, and very boring. There were rows of string beans strictly tied to stakes, lines of floppy lettuces, frothy dark green carrot tops, and well-behaved potato plants. George couldn't even kick a ball without it landing splat in the middle of a carefully tended blueberry bush and squashing it.

George's parents had marked out a little area for George to grow his own vegetables, hoping he would become interested in gardening and perhaps grow up to be an organic farmer. But George preferred looking up at the sky to looking down at the earth. So his little patch of the planet stayed bare and scratchy, showing nothing but stones, scrubby weeds, and bare ground, while he tried to count all the stars in the sky to find out how many there were.

Next Door, however, was completely different. George often stood on top of the pigsty roof and gazed over the fence into the glorious tangled forest beyond. The sweeping bushes made cozy little hidey-holes, while the trees had curved, gnarled branches, perfect for a boy to climb. Brambles grew in great clumps, their spiky arms bending into strange, wavy loops, crisscrossing each other like train tracks at a station. In summer, twisty bindweed clung on to every other plant in the garden like a green cobweb; yellow dandelions sprouted everywhere; prickly poisonous giant hogweed loomed like a species from another planet, while little blue forget-me-not flowers winked prettily in the crazy bright green jumble of Next Door's backyard.

But Next Door was also forbidden territory. George's parents had very firmly said no to the idea of George using it as an extra playground. And it hadn't been their normal sort of no, which was a wishy-washy, kindly, we're-asking-you-not-to-for-your-own-sake sort of no. This had been a real no, the kind you didn't argue with. It was the same no that George had encountered when he tried suggesting that, as everyone else at school had a television set -- some kids even had one in their bedroom! -- maybe his parents could think about buying one. On the subject of television, George had had to listen to a long explanation from his father about how watching mindless trash would pollute his brain. But when it came to Next Door, he didn't even get a lecture from his dad. Just a flat, conversation-ending no.

George, however, always liked to know why. Guessing he wasn't going to get any more answers from his dad, he asked his mother instead.

"Oh, George," she had sighed as she chopped up Brussels sprouts and turnips and threw them into the cake mix. She tended to cook with whatever came to hand rather than with ingredients that would actually combine to make something tasty. "You ask too many questions."

"I just want to know why I can't go next door," George persisted. "And if you tell me, I won't ask any more questions for the rest of the day. I promise."

His mom wiped her hands on her flowery apron and took a sip of nettle tea. "All right, George," she said. "I'll tell you a story if you stir the muffins." Passing over the big brown mixing bowl and the wooden spoon, she settled herself down as George started to beat the stiff yellow dough with the green and white vegetable speckles together.

"When we first moved here," his mom began, "when you were very small, an old man lived in that house. We hardly ever saw him, but I remember him well. He had the longest beard I've ever seen -- it went right down to his knees. No one knew how old he really was, but the neighbors said he'd lived there forever."

"What happened to him?" asked George, who'd already forgotten that he'd promised not to ask any more questions.

"Nobody knows," said his mom mysterious...