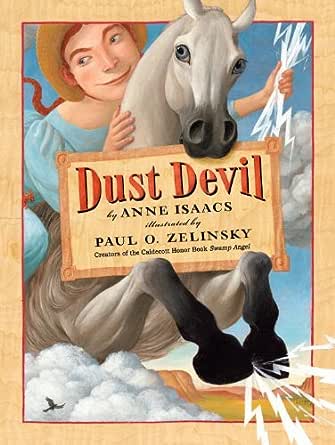 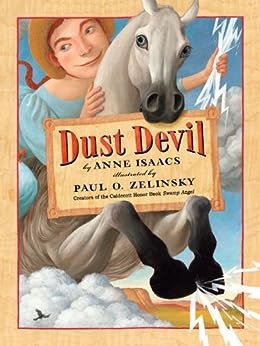 Anne Isaacs is the award-winning author of many books for children, including Swamp Angel, a Caldecott Honor Book, an ALA-ALSC Notable Book, and a Boston Globe-Horn Book Honor Book; Cat Up a Tree, a New York Public Library Title for Reading and Sharing; Torn Thread, an ALA-ALSC Notable Book and a National Jewish Book Award finalist; and Pancakes for Supper, winner of the Oppenheim Toy Portfolio Platinum Best Book Award. Ms. Isaacs lives in Berkeley, California. Visit her at www.anneisaacs.com.

Paul O. Zelinsky is one of the most highly acclaimed illustrators working today. He has received a Caldecott Medal for his telling of Rapunzel, and three Caldecott Honors, for Rumpelstiltskin, Hansel and Gretel, and Swamp Angel, which the New York Times Book Review called “in all ways superb.” The illustrator of Emily Jenkins’s popular Toys Go Out and its sequel, Toy Dance Party, Mr. Zelinsky is also the creator of the bestselling mechanical book The Wheels on the Bus. He lives in Brooklyn, New York. Learn more about him at www.paulozelinsky.com.--From the Hardcover edition. --此文字指其他 kindle_edition 版本。

Amazon Customer
5.0 颗星，最多 5 颗星 Great tall tales with beautiful illustrations
2013年1月26日 - 已在美国亚马逊上发表
已确认购买
My boys, 6 and 3, both love it. It's a fun story with Zelinksi's signature style in every picture. We're definitely going to pick up the first book Swamp Angel, when the next birthday comes around.
阅读更多
1 个人发现此评论有用

Betsy Bird
5.0 颗星，最多 5 颗星 The devil is in the details
2010年9月18日 - 已在美国亚马逊上发表
If Pippi Longstocking is a redhead known for her casual legwear, Angelica Longrider (or just "Angel" for short) would have to be considered her blatantly barefoot ginger-headed equivalent. When the Anne Isaacs Caldecott Honor winning picture book Swamp Angel took the stage back in 1994 it was cause for celebration. Here you had an honest-to-goodness new tall tale with a vernacular smart enough to match the pictures, and vice versa. The pairing of Anne Isaacs with Caldecott winner Paul O. Zelinsky was inspired. I was a big fan, yet for some reason I never considered that the book might garner a sequel. Clearly it was ripe for it, but Isaacs and Zelinsky pursued other projects and the thought was all but forgotten. Until now. After 16 years the dynamic duo is back. She's a wordsmith. He likes to kill himself by painting on wood. Clearly, Dust Devil was meant to be.

Having found Tennessee a bit too cramped to suit her, giantess and all around decent gal Angelica Longrider ("Swamp Angel" to some) has headed further into the country to set up shop in Montana. It takes a little settling in, but she's happy enough and even manages to tame a wild dust storm into a steed worthy of her skills. Good thing too, since that nasty Backward Bart and his band of no goodniks are terrorizing the countryside, robbing good people of their pennies. If she could wrestle a bear into submission, Angel certainly can handle a couple of toughs. But it'll take smarts as well as skills to put these nasty bandits away. Good thing she's got her horse.

The first thing you need to know about Anne Isaacs is the fact that her books, all her books, ache to be read aloud. It doesn't matter if you're perusing Pancakes For Supper or The Ghosts of Luckless Gulch. Now sometimes they're a bit too long for storytimes (much to my chagrin) but for one-on-one reading they're the tops. I mean, there are certain sentences that just beg you to try them on your tongue. Sentences like, "The barn began to shake, the ground to quake, the windows to break, the animals to wake, and everyone's ears to ache!" Fear not, this isn't a rhyming text. There are just certain sections where it's the right thing to do.

While you're rolling her sentences around in your mouth, there are also Zelinsky's images to contend with. Painting on cedar and aspen veneer, Zelinsky is meticulous about his process. The result is a book that is rather achingly beautiful. Even if you don't take to his style, you have to respect the process. The size of the images combined with the tiniest of brush marks mean that with every other page you're either backing up to take the whole thing in at once, or you're pressing your nose to the page, tracing subtle elements with just the tips of your fingertips.

It seems like a gross oversight on someone's part that Zelinsky has never been tapped to create a graphic novel. Clearly the groundwork has already been laid here. I am referring of course to the man's use of panels. In an early sequence Zelinsky cleverly breaks up a large block of text into six long horizontal panels. It makes Angel appear downright small, which is a bit of a feat in and of itself. There are other comic techniques Zelinsky utilizes too, if only you notice them. He's not afraid, for example, to create long two-page spreads where Angelica appears in various places, giving the impression that time is passing. You won't find so much as a hint of a speech bubble in this book, but when it comes to good old-fashioned visual storytelling, Zelinsky proves his mettle.

By the way, that initial panel sequence is the first example in the book of the man's penchant for tiny details. When you're illustrating a book about a giantess, the temptation to inculcate it with hidden details must be irresistible. But the nice thing about this initial sequence is that the tiny details are in Angelica's face as she peeks from her little cabin. One moment she's just a quarter of a tiny face looking right at the viewer. The next she has dramatically clasped her hands over her heart in her longing for the trees of Tennessee. Other details are fun to find as well. Can you locate Angel's little red dog or the black crow that follows her about in the pictures? Did you notice that there are always two cats that appear when Aunt Essie's around?

You could certainly nitpick about scale, but why bother? If Angel dwarfs the Great Lakes at the beginning of the book and then is small enough to at least make an attempt at mounting a regular sized mare a couple pages later, can you really complain? This is a tall tale, for crying out loud. Exaggeration is the name of the game and if you're limiting your exaggeration to merely words then you've sort of lost sight of the whole point. Mr. Zelinsky has made a bit of a name for himself over the years with his giants. There was the initial Swamp Angel of course, and then there were the Awful Ogre books by Jack Prelutsky. Actually there's one image in this book of Angel riding a twister, the sole of her bare foot thrust towards the reader this is distinctly Awful Ogre-ish. The man knows his big folks.

And it's funny. Yes, full credit to the funny books of the world. The best funny picture books are the ones where the artist's humor and the author's humor work in tandem with one another. That is clearly the case here, since the page containing Backward Bart's evil gang had me snorting out loud. On her end, Isaacs is throwing out names like "Lovely Poe", "Lawless Sam Diego", and "Missouri Jerk". For his part, Zelinsky makes Lovely Poe entirely skewed, Missouri Jerk pomaded and mustached, and Lawless Sam Diego is either falling or reclining, sans shoes. It's hugely amusing.

I should probably mention problems with the books as well at this point, eh? Uh . . . hrm. Well, that's a toughie. Cause as I see it, this is a book with appeal for all kinds of kids. Lure in the kids who only like princess stories with the fact that it's about a pretty lady who tames a horsey. Lure in the battle fans with the fact that she has to go head-to-head with a pack o' baddies. There's adventure, great storytelling, and images that'll make your eyes water. Yeah, I'm stumped. Can't think of a single critical thing to say about this one. It's just purely beautiful. But you'll have to see it yourself to believe me.