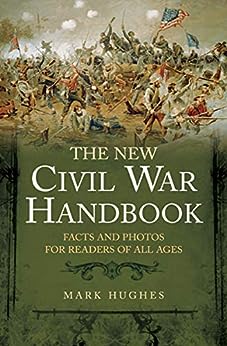 英语版本 Mark Hughes (作者) 格式: Kindle电子书
|
分享
分享 <分享样章>
广告
显示所有 格式和版本 隐藏其他格式和版本
“This book triumphs on several levels . . . This is going to be my answer to the question ‘Where should I start looking at the Civil War?’ from now on.” —TOCWOC–A Civil War Blog

The New Civil War Handbook is a complete up-to-date guide for American Civil War enthusiasts of all ages. Author Mark Hughes uses clear and concise writing, tables, charts, and more than 100 photographs to trace the history of the war from the beginning of the conflict through Reconstruction.

Coverage includes battles and campaigns, the common soldier, technology, weapons, women and minorities at war, hospitals, prisons, generals, the naval war, artillery, and much more. In addition to these important areas, Hughes includes a fascinating section about the Civil War online, including popular blog sites and other Internet resources. Reference material in The New Civil War Handbook includes losses in battles, alternate names for battles, major causes of death of Union soldiers (no data exists for Confederates), deaths in POW camps, and other valuable but hard to locate information.

Readers will find The New Civil War Handbook to be an invaluable quick reference guide, and one that makes an excellent gift for both the Civil War novice and the Civil War buff.

Arkansaw Traveler
3.0 颗星，最多 5 颗星 OK, This One Wasn't For Me -- But Many Will Like It
2009年10月26日 - 已在美国亚马逊上发表
已确认购买
I purchased this little book because it was published by Savas Beatie, a publisher that is obviously dedicated to producing the finest possible books on the American Civil War and Revolutionary War.

But for me, this was a miss, although for many it might be a hit. I thought it might be something like my volume by Frederick Phisterer, "Statistical Record of the Armies of the United States", only updated and expanded. Instead, it was a popular work with 92 pages of pictures and captions, 27 pages of various statistics, two pages each on African-Americans and Native Americans (I guess for political correctness), a glossary of Civil War terms, 18 pages of addresses, phone numbers and web links for Civil War related locales, 8 pages of references, and 5 pages of various stuff available on the web. The locale addresses, and the pages on web-available stuff were about the only things of use to me, as I already owned the vast majority of the references, even those of doubtful use like Shelby Foote's three volume set, "The Civil War: A Narrative" in which Foote never lets facts get in the way of a good story.

There were many other references I would have listed, particularly under the "Commanders" section like Freeman's "R.E.Lee, A Biography" (in 4 volumes) and Sherman's "Memoirs of General W.T. Sherman", but the author's list is a reasonable start. By the way, "Battles And Leaders" now has six volumes, not four.

So this is not a book for the specialist, but rather the general historian. For beginners or others with only general interest in the Civil War, or those who want to see quick facts on participation by state or casualties by battle, this would be a useful reference. The list of references also contains many excellent books.

So I am forced to give this book only three stars, but that's because I'm a curmudgeon. Most readers will probably give it five.

Bradley Jones
3.0 颗星，最多 5 颗星 Interesting facts about the Civil War.
2014年4月14日 - 已在美国亚马逊上发表
已确认购买
For what it is, this is a good, simple overview of interesting Civil War facts. It is good to know a bit about this war before reading it though. You are more likely to appreciate what it has to offer. Quick interesting read. Nothing awe inspiring here though. More of and addendum read. Enjoy.
阅读更多
2 个人发现此评论有用

George K
5.0 颗星，最多 5 颗星 Current U S Civil War information.
2015年10月11日 - 已在美国亚马逊上发表
已确认购买
Information in the handbook is very much up to date. The presentation is fresh and there is a large volume of information available.
阅读更多